Below are some photos of the female Chinatown hawk who passed away in the early hours of March 31.  I only spent about a month observing her and her mate, but quickly grew attached.  Their youthful energy was so engaging and I was fascinated watching them go through their mating and nesting rituals.  They were a joy to experience.

March 13:  I found her hanging out in a ball court on Eldridge Street. 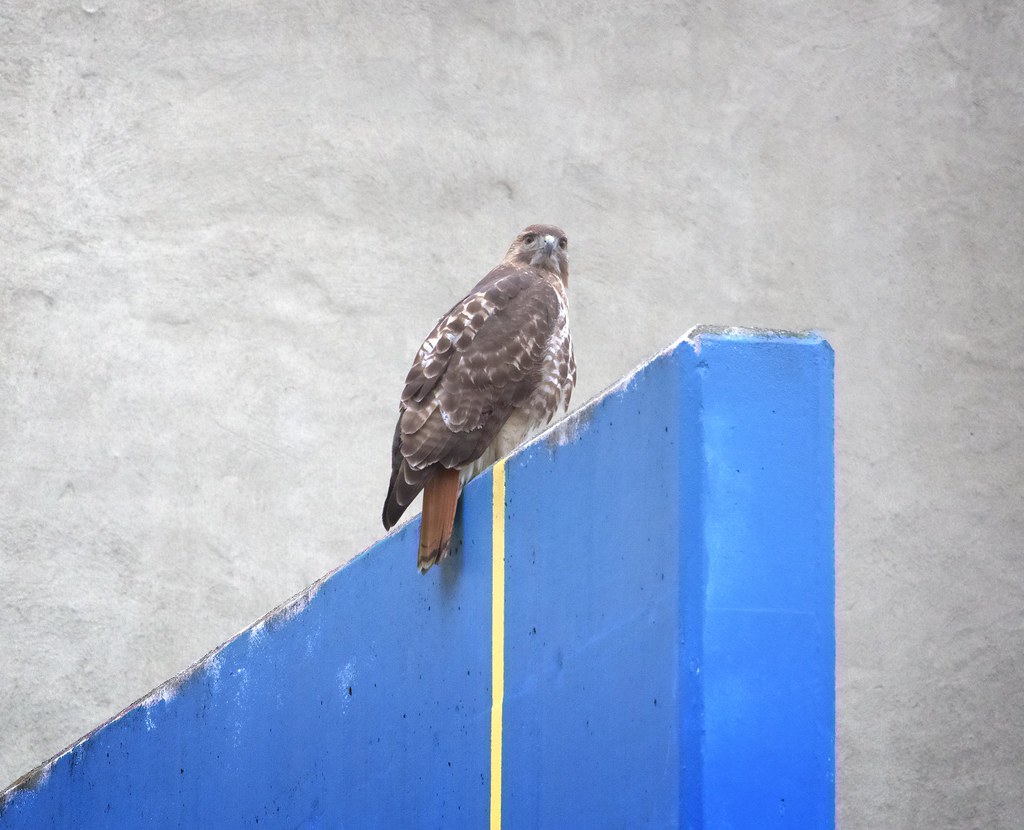 She was interested in a trash pile, which was worrying.  I couldn't see if there were rodents hidden behind the fence, but the hawk tried several times to grab at what ever was in there. 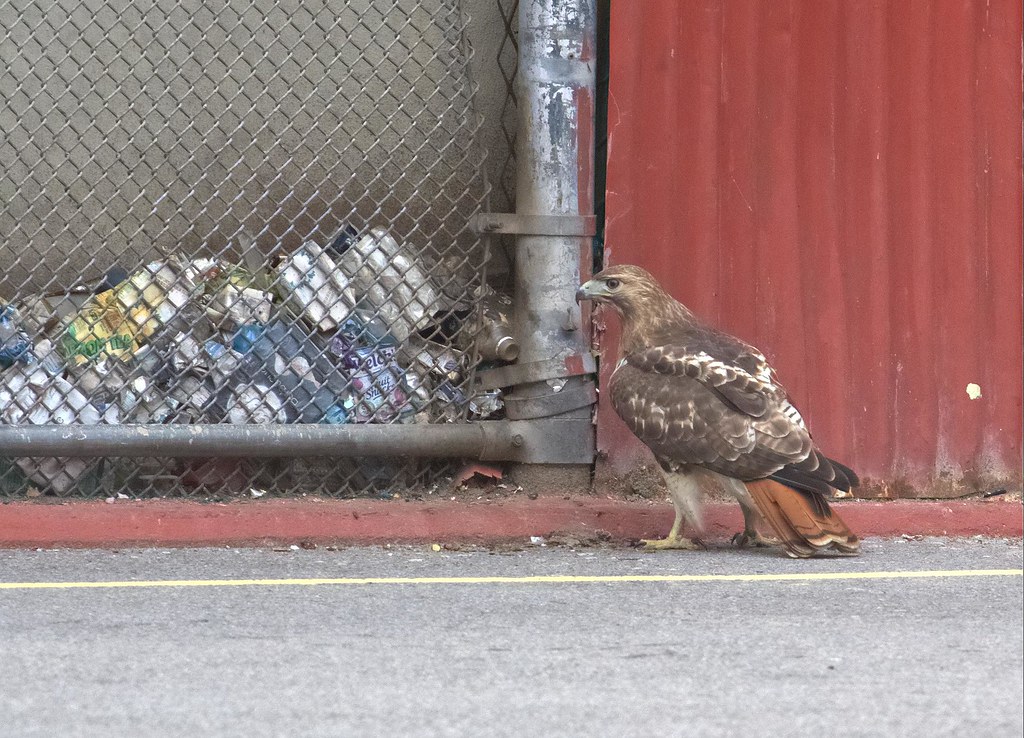 You can see she had bright yellowish-amber eyes and a distinctive tail.  The outer feathers had dark brown barring, which made her easy to identify. 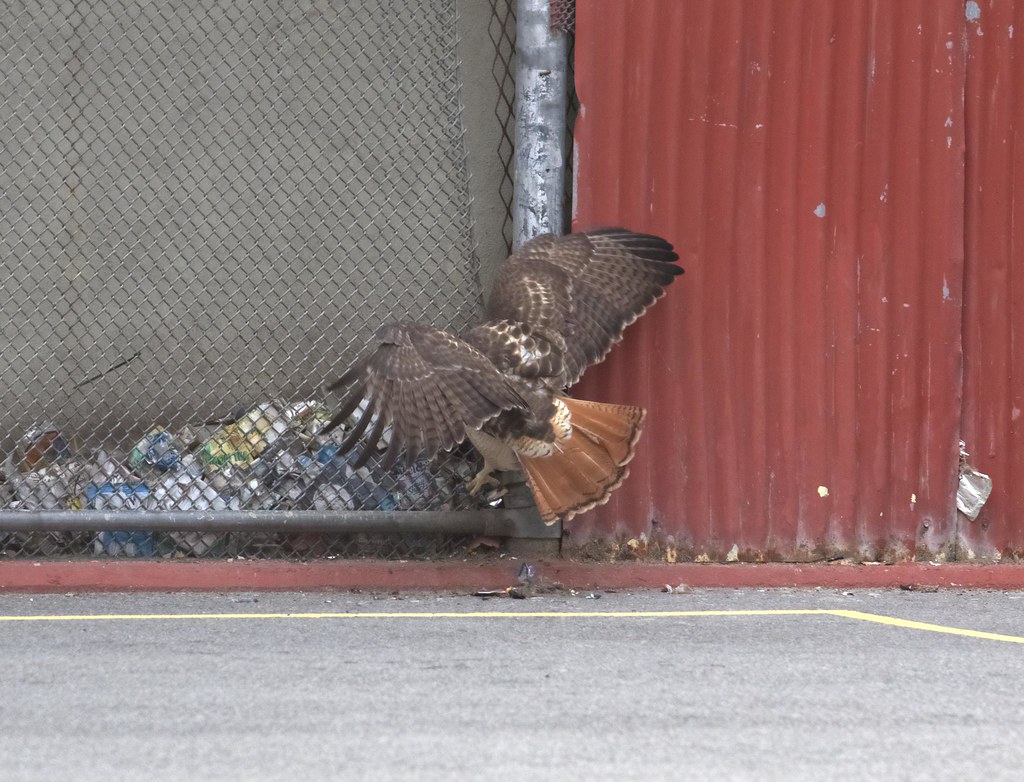 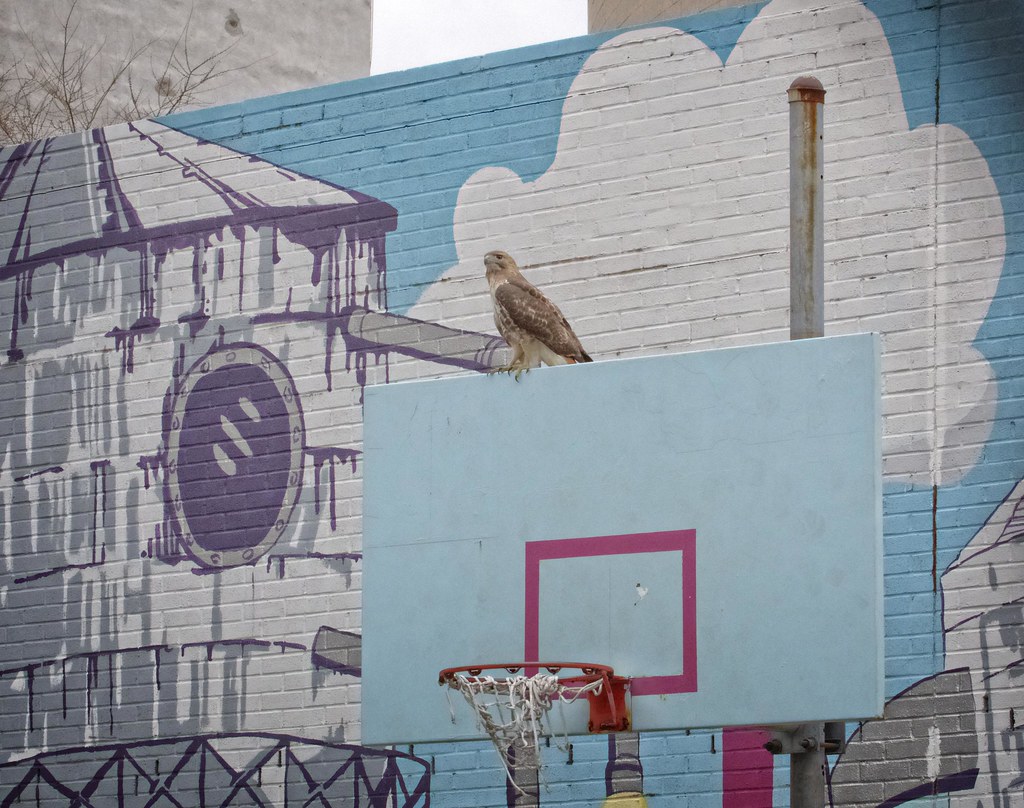 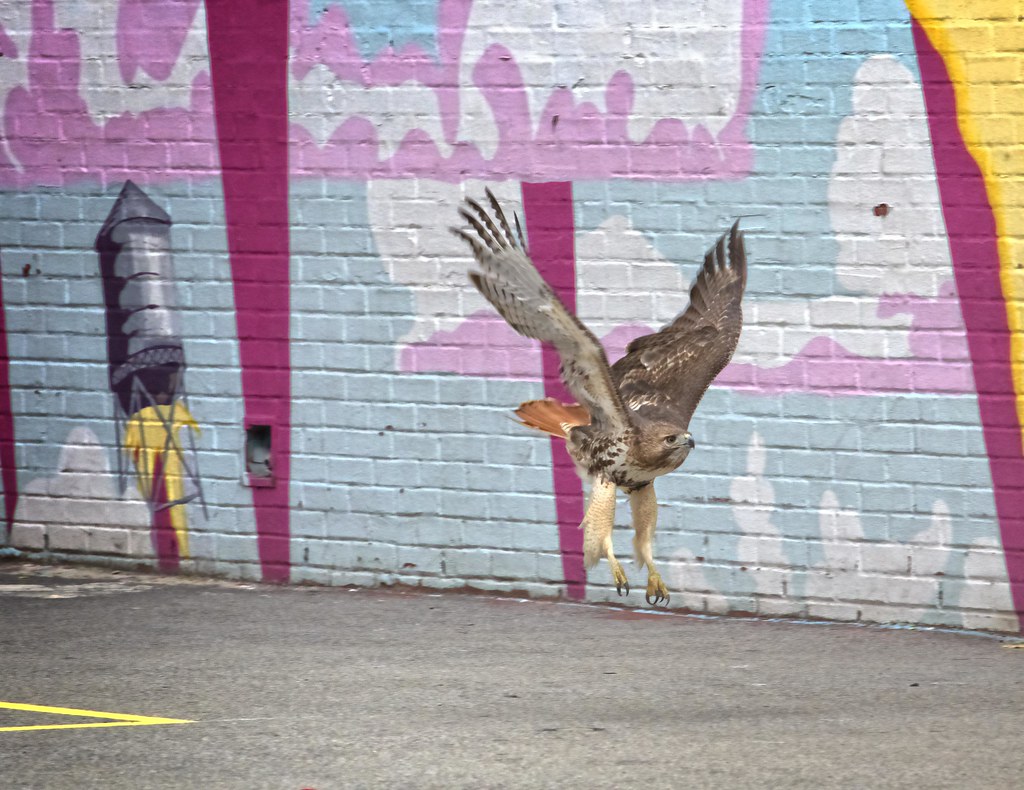 March 18:  Both hawks took sticks from Columbus Park to an a/c on the city administrative building on Baxter Street.  They would visit nearly every a/c in the area. 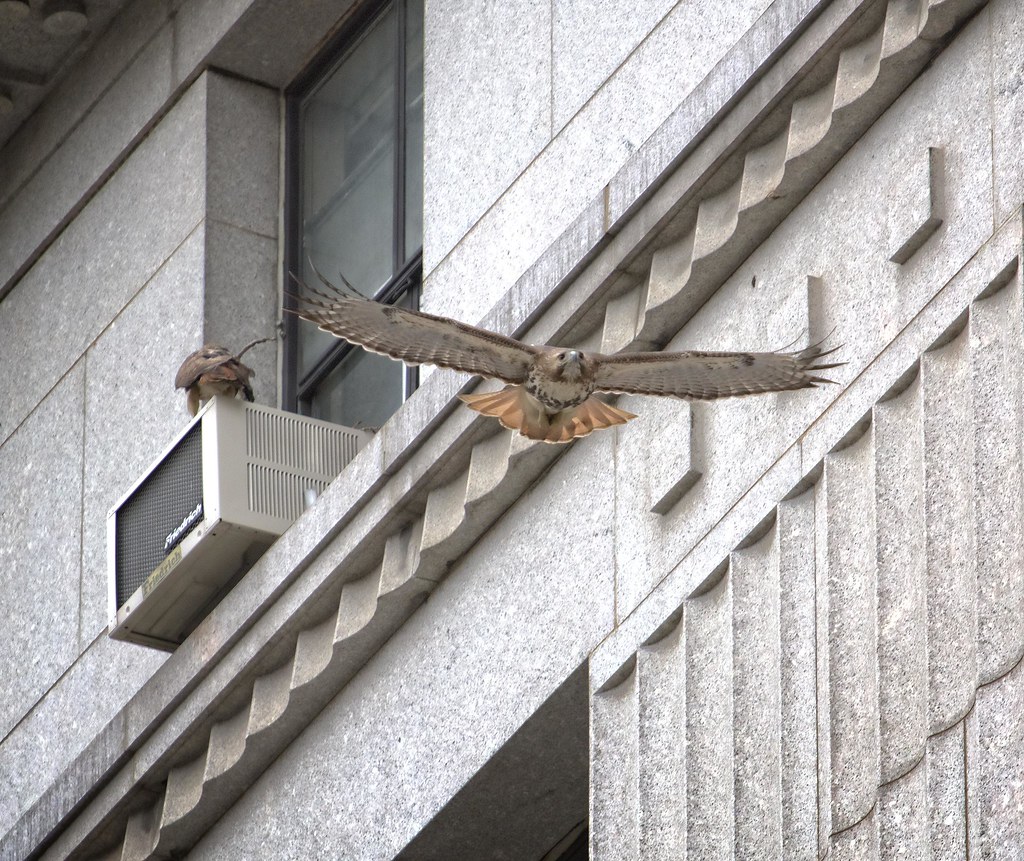 The female took a piece of bark to an open window on the Baxter side of the Criminal Court Building. 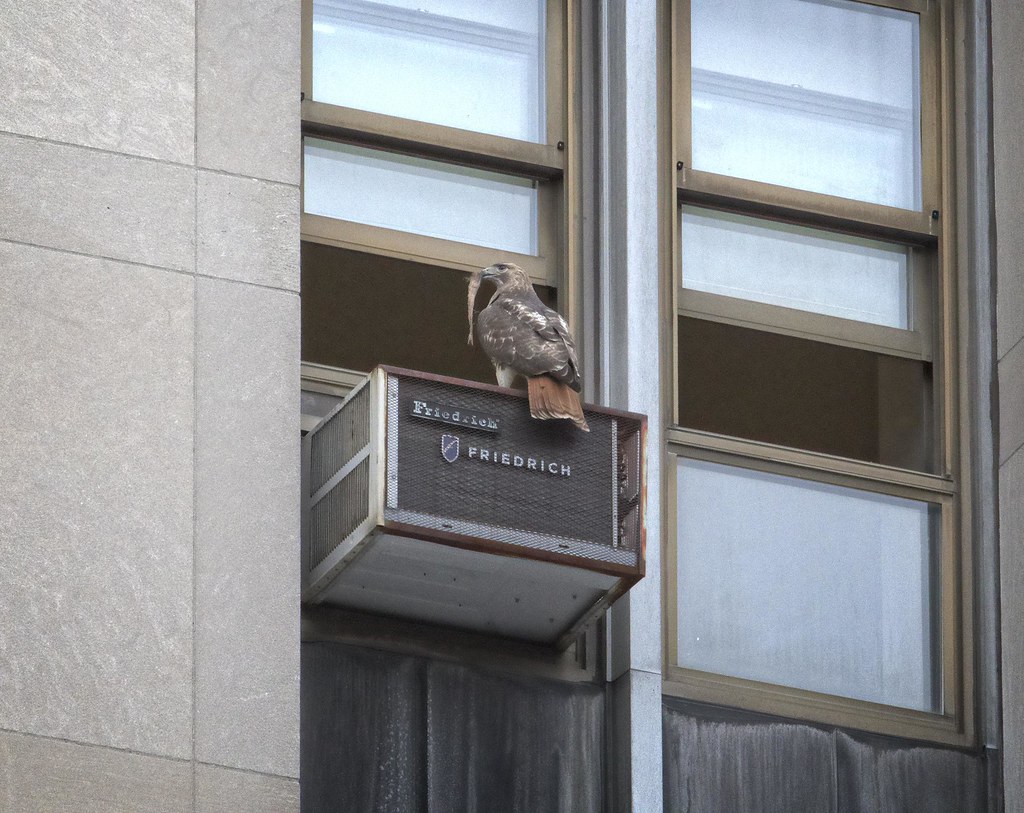 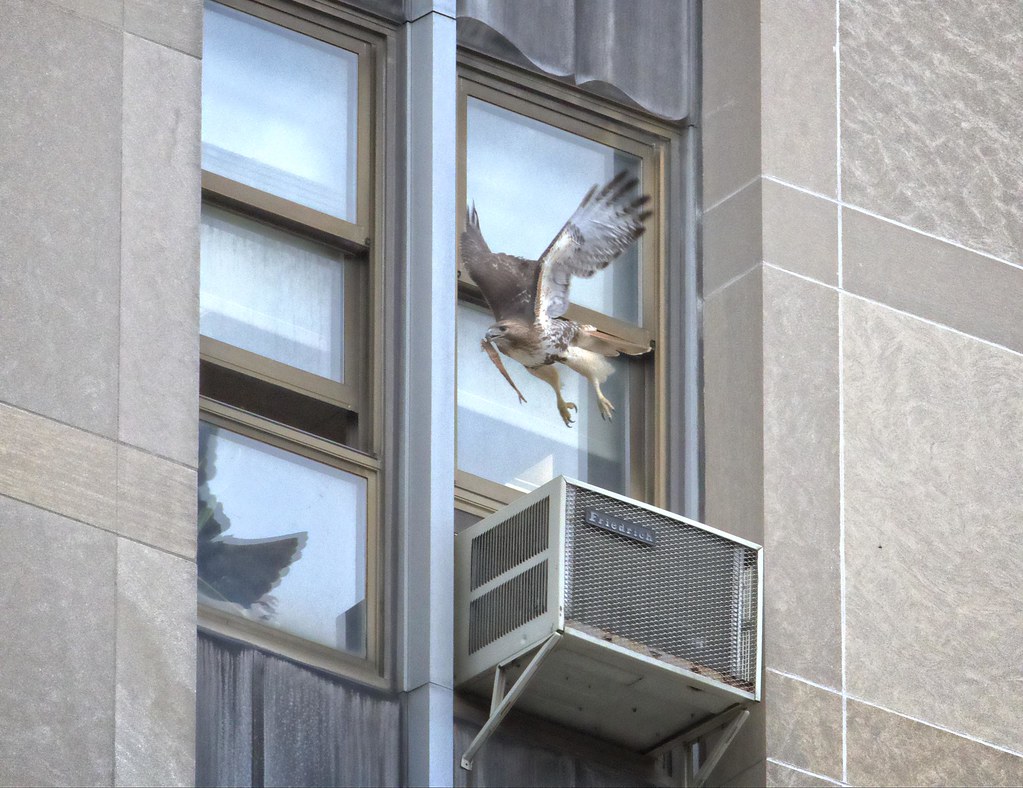 Both hawks spent a great deal of time in Collect Pond Park.  Here, the female looks at me while her mate eyes some pigeons. 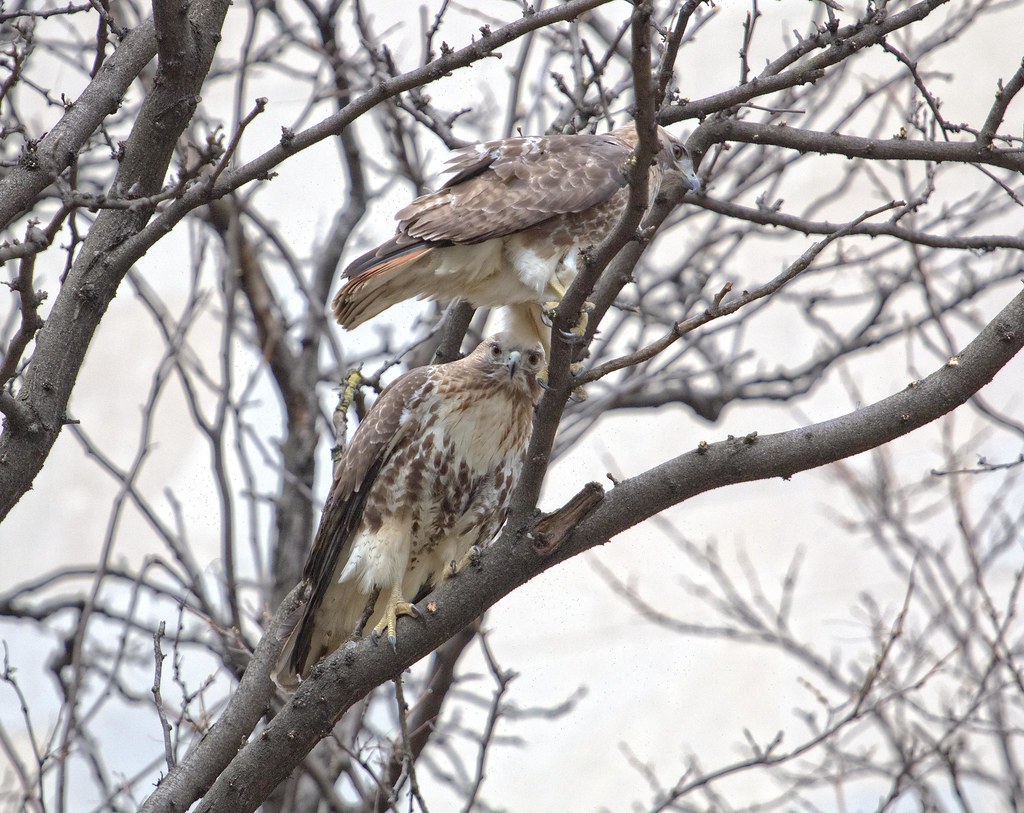 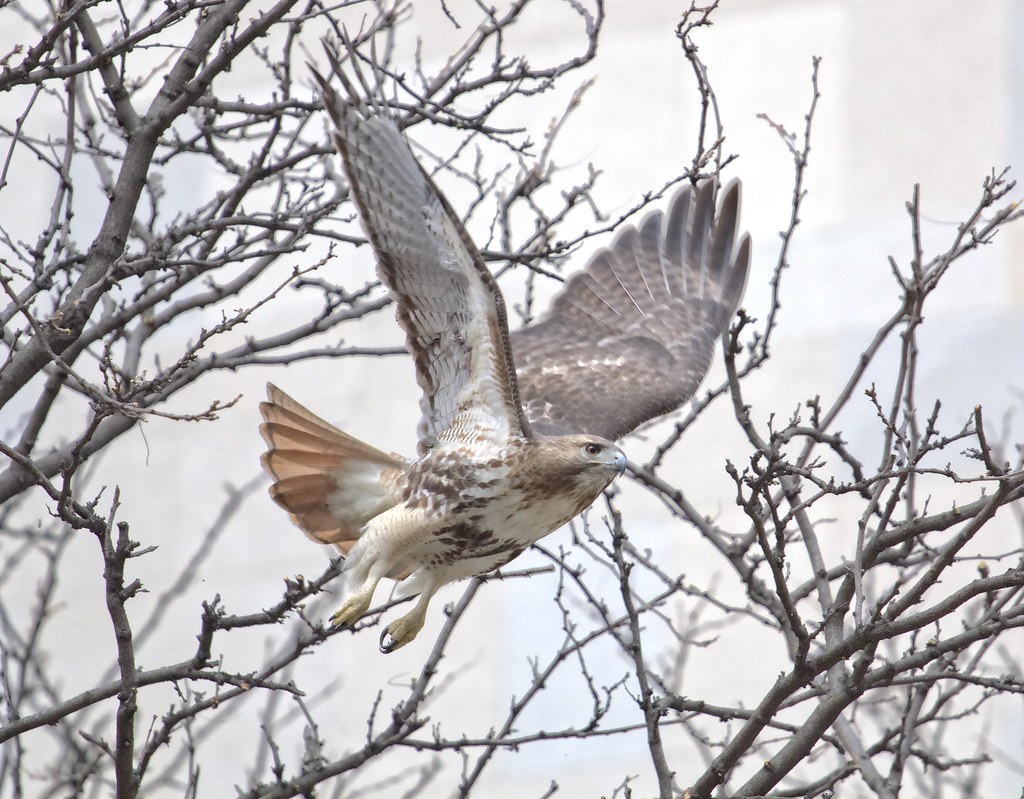 She had a patch of ruffled feathers on the underside of her right wing which also aided in identifying her. 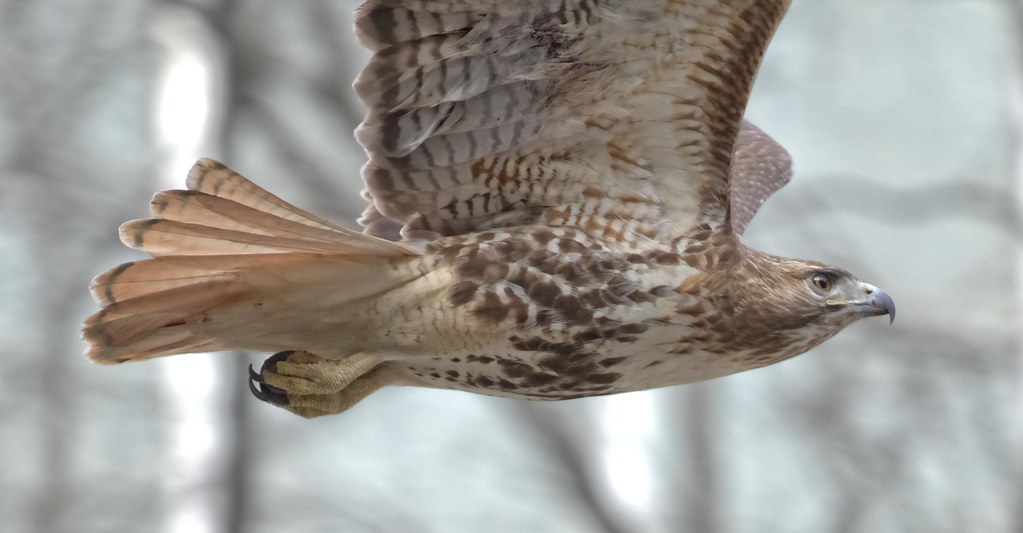 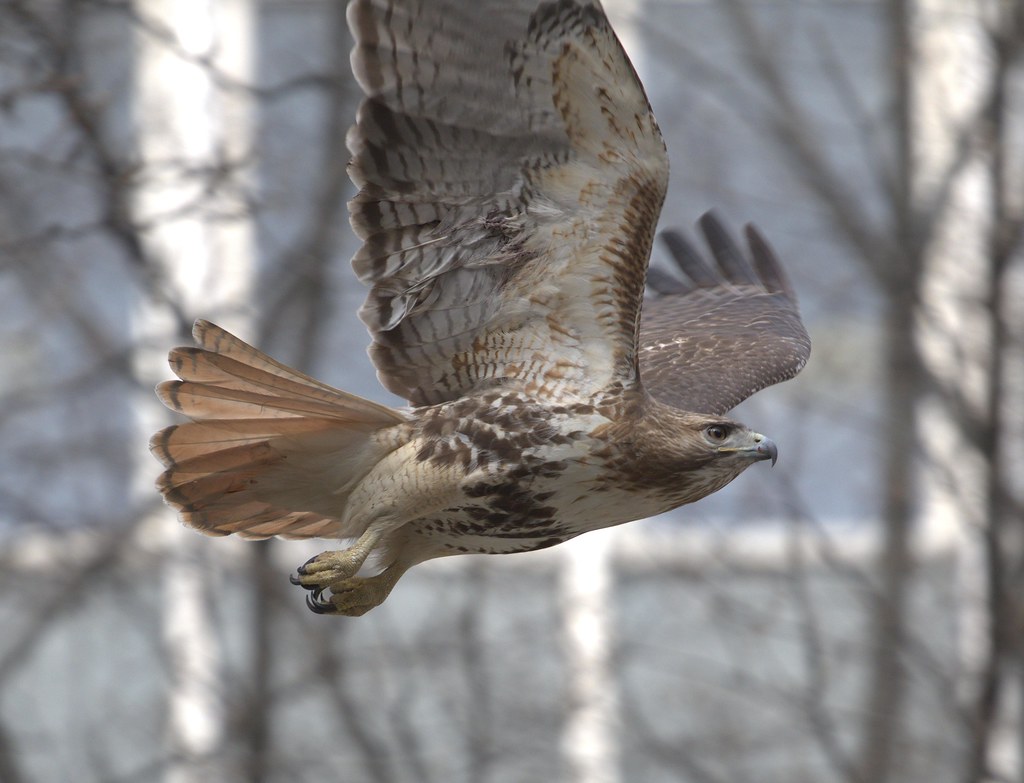 March 19:  She gathers sticks in Collect Pond Park.  The hawks ended up favoring an a/c on the Leonard Street side of Department of Health building for their nest. 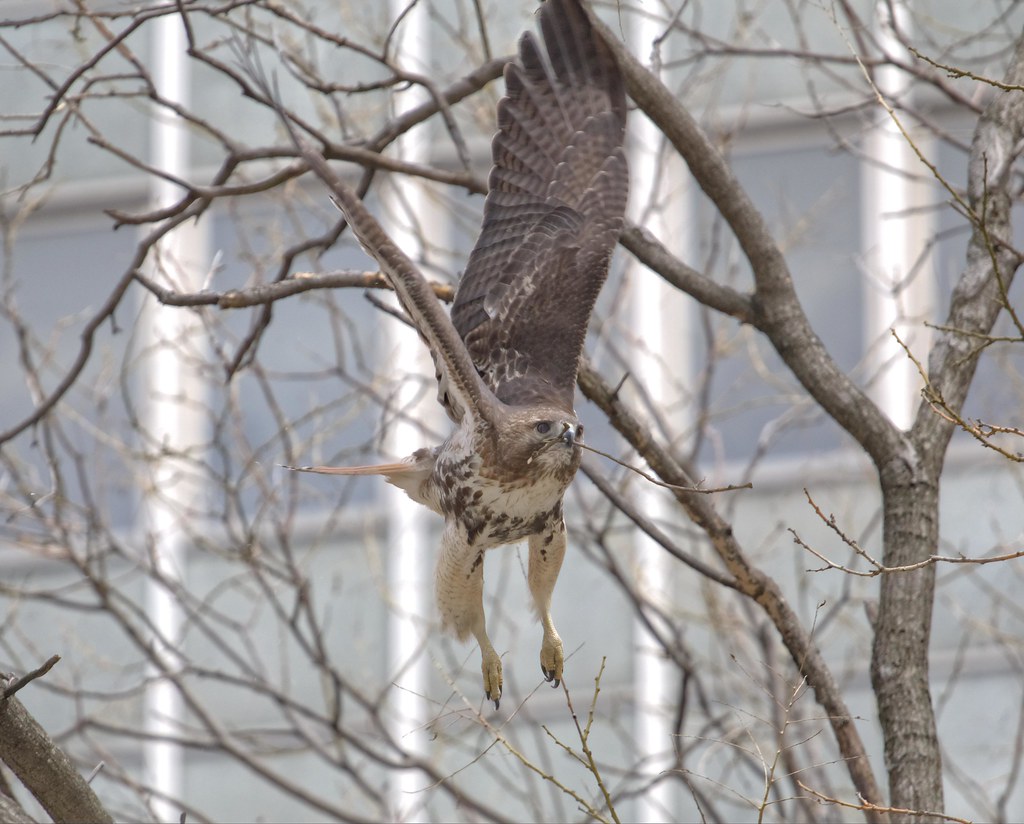 March 21:  Flying with a stick over Hogan Place in the early morning. 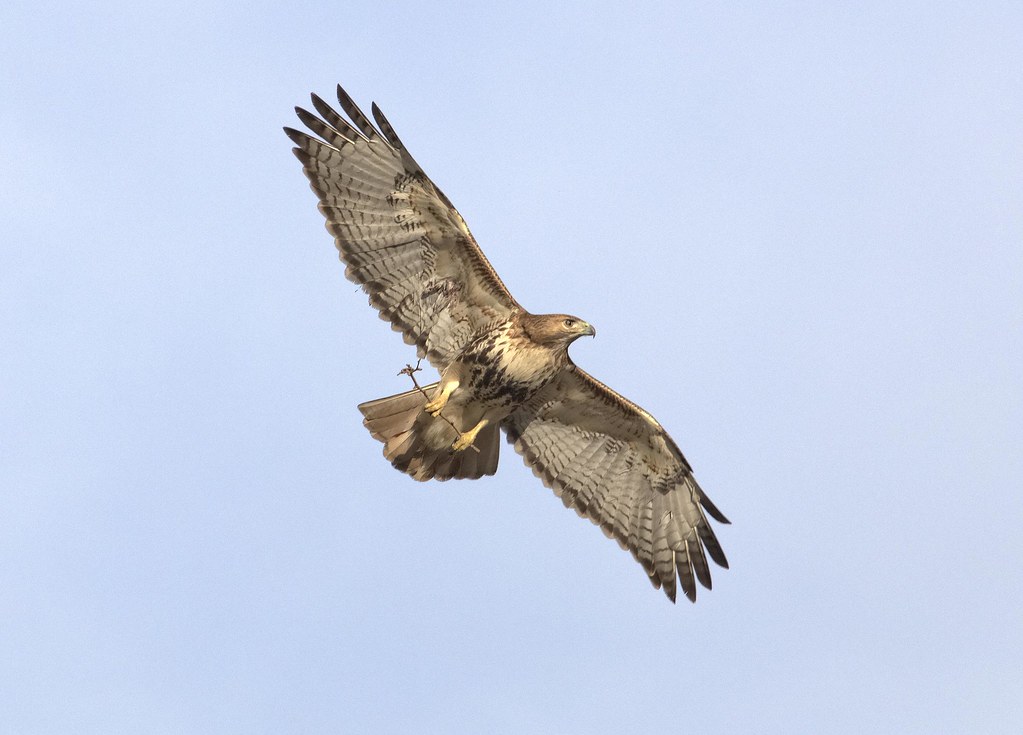 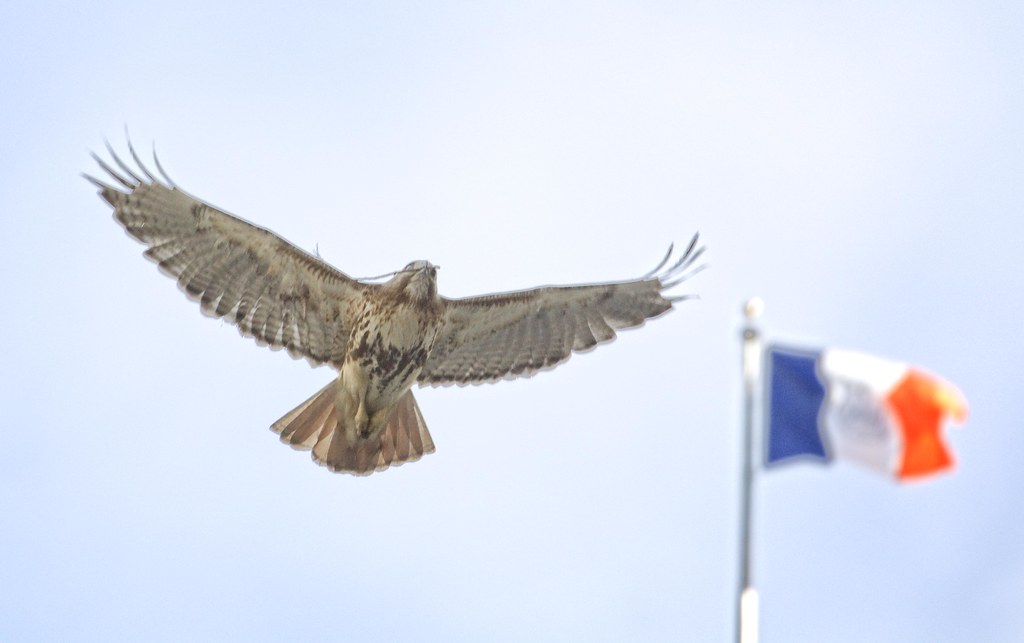 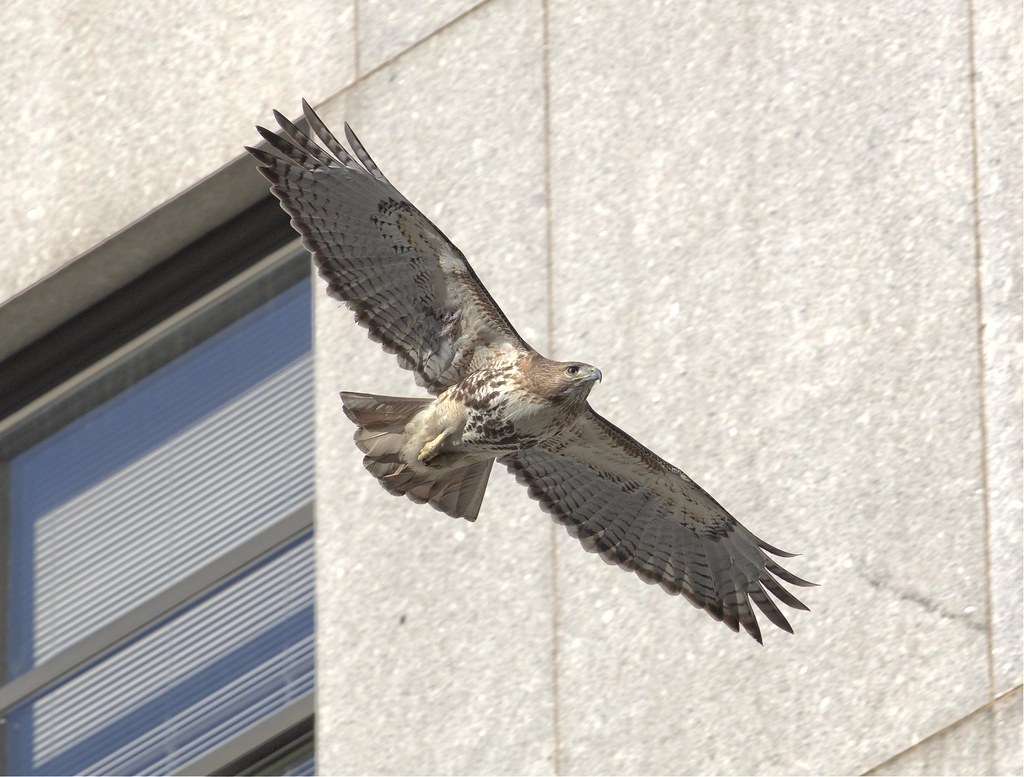 March 25:  Mating right above the entrance to the Criminal Court Building.  At the time, I thought this was hilarious. 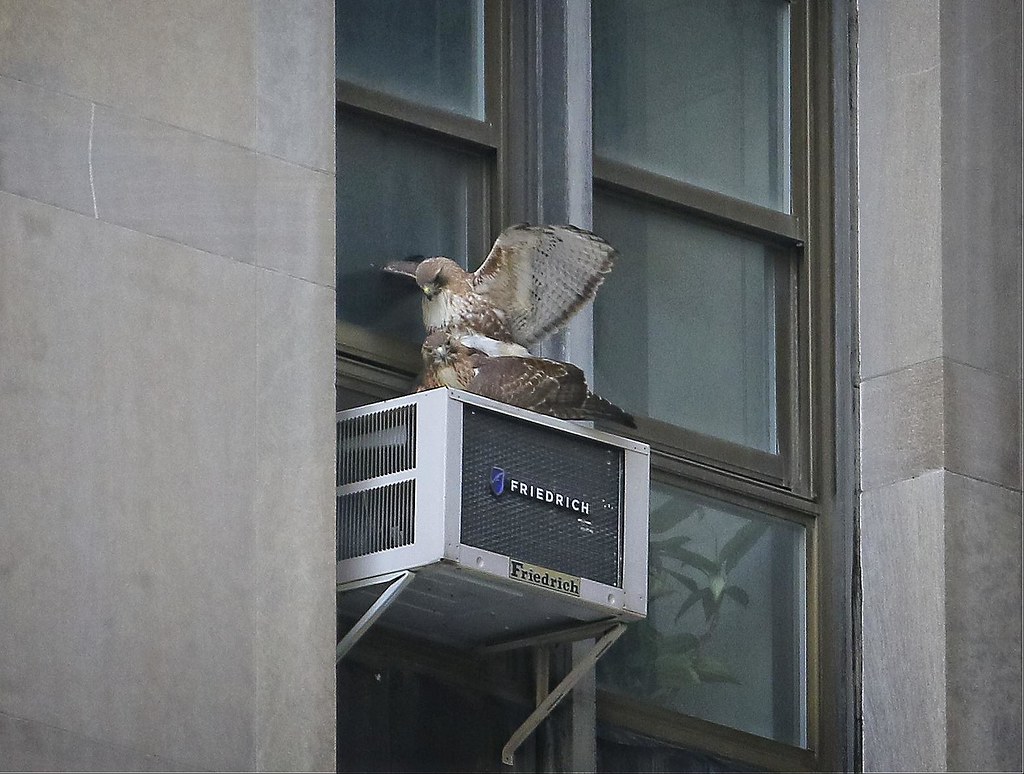 March 30:  Late in the evening, the hawks mated for one last time in Collect Pond Park, then sat together for a few minutes (he is on the left, she's on the right).  This was the last time I saw the pair together like this.  He ended up flying off to roost in Columbus Park, while she remained in the tree. 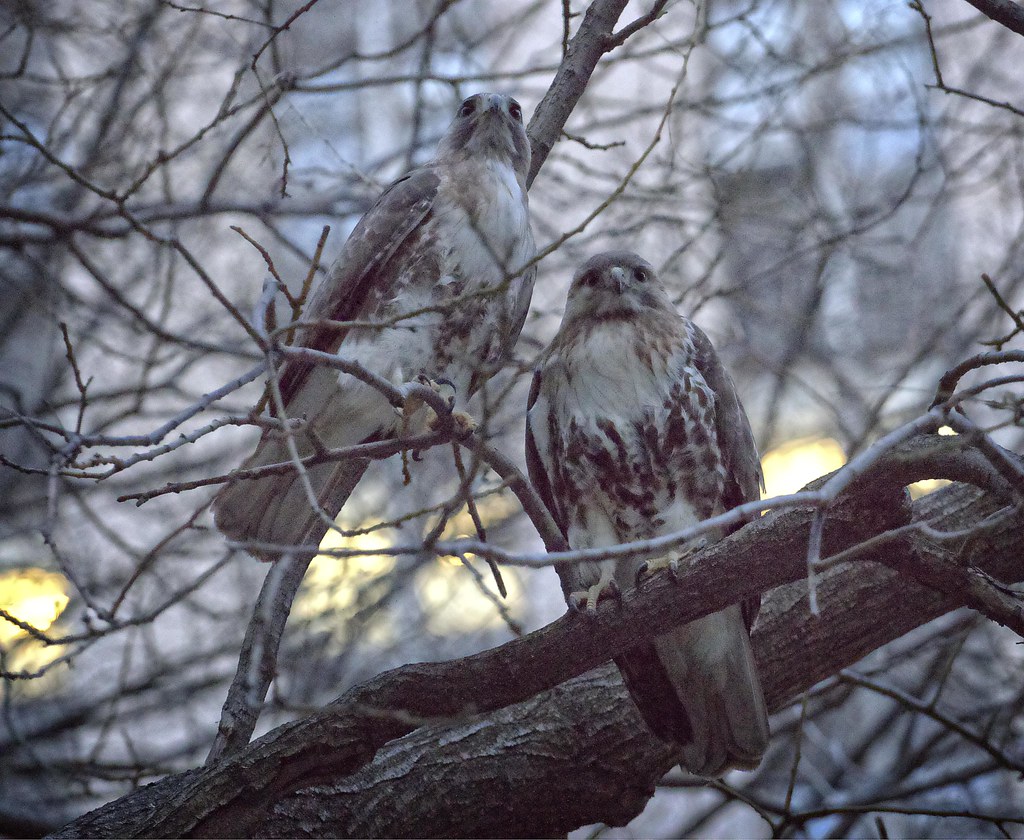 Update:  The male was seen taking sticks to an a/c across the street from Collect Pond Park today, so he is still in the area and appears to still be in nest-building mode.

As far as I know, there is no plan to stop baiting for rats in the area.  Rodenticide is a public health issue.  Please email Council Member Margaret Chin (chin@council.nyc.gov) and demand the city use alternative methods of pest control in our public parks.
Posted by Laura Goggin Photography at 9:01 PM