Busy hawk week with Christo, Nora and a youngster

I am just catching up after several days of hawk activity in and around Tompkins Square.

First, though, an update on Dora:  as of this week, her wounds have healed, but she is still unable to fly.  She is still in the care of WINORR and we are hoping she can exercise her wing and regain strength.  I really miss her and I think maybe Christo does, too.  I try not to anthropomorphize and project my feelings onto him, but he has been acting sullen and surly since she's been away.

We do still have the new girl, Nora, and she's still a mystery to me. I found her last Friday perched on a fire escape on Avenue A. 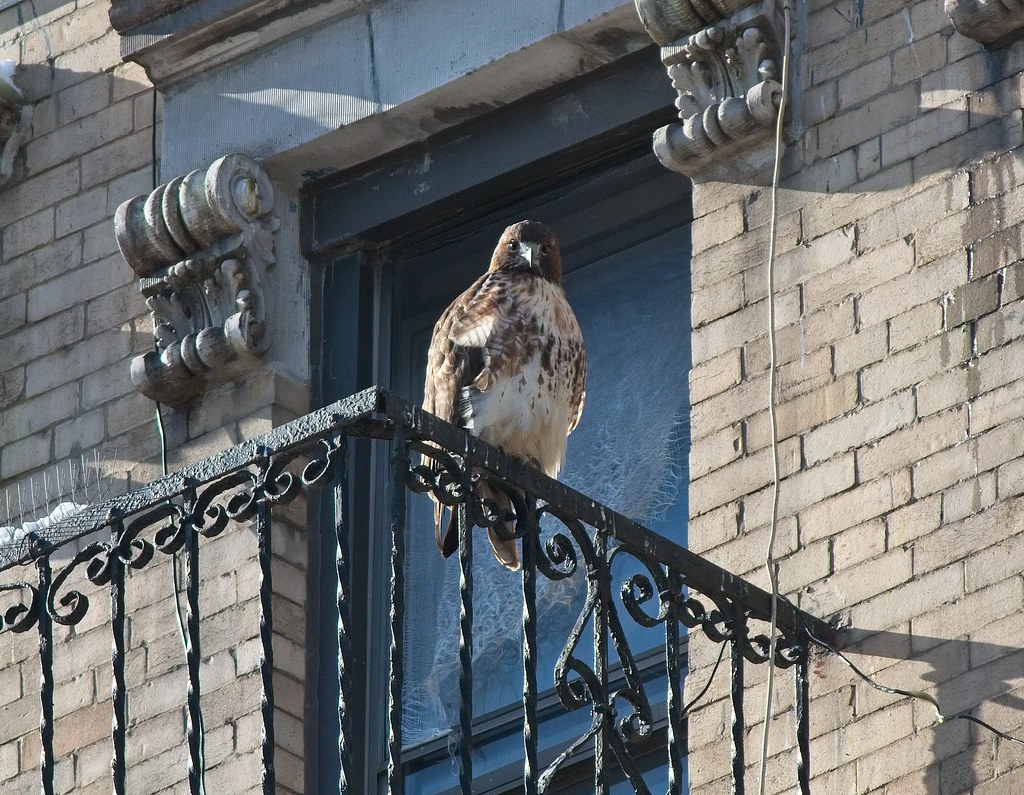 She actively watched the pigeons that flew up and down the street. 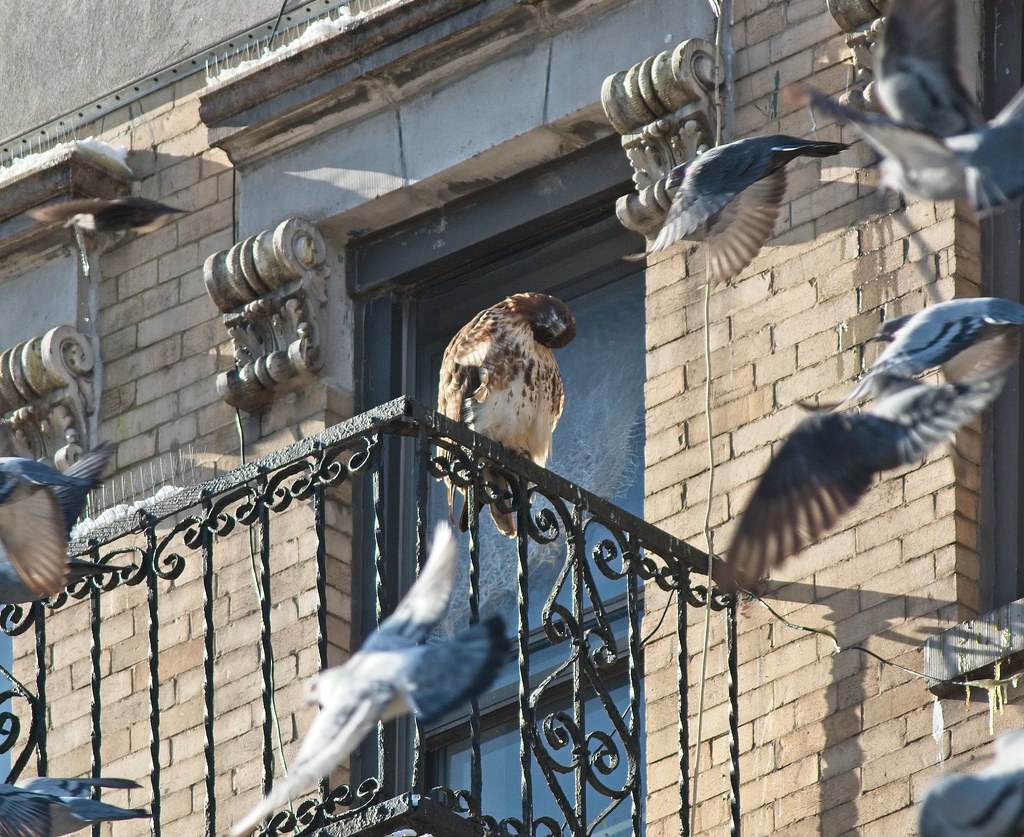 She also paid a lot of attention to me and everyone who walked by. She then demonstrated how lightning-fast she is when she shot off the fire escape without warning and chased after a flock of pigeons.  I was impressed. 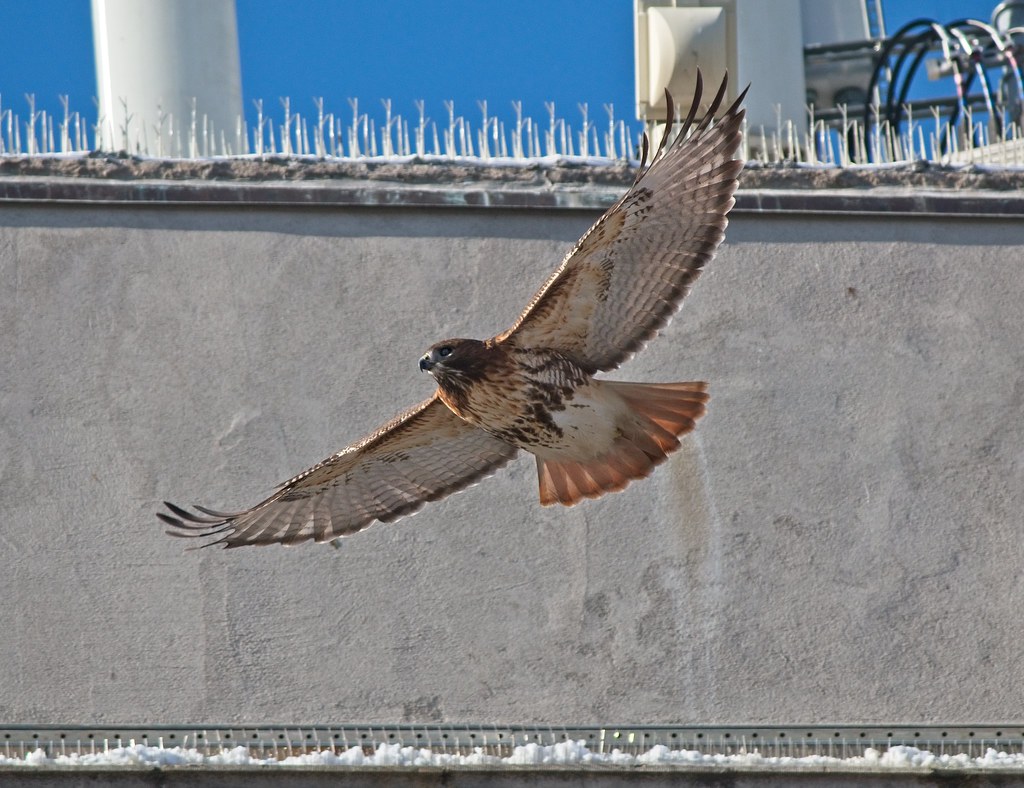 She disappeared down Avenue A, so I opted to go into the park and look for Christo.

I found him on the east side of the park perched in the sun and showing some leg. 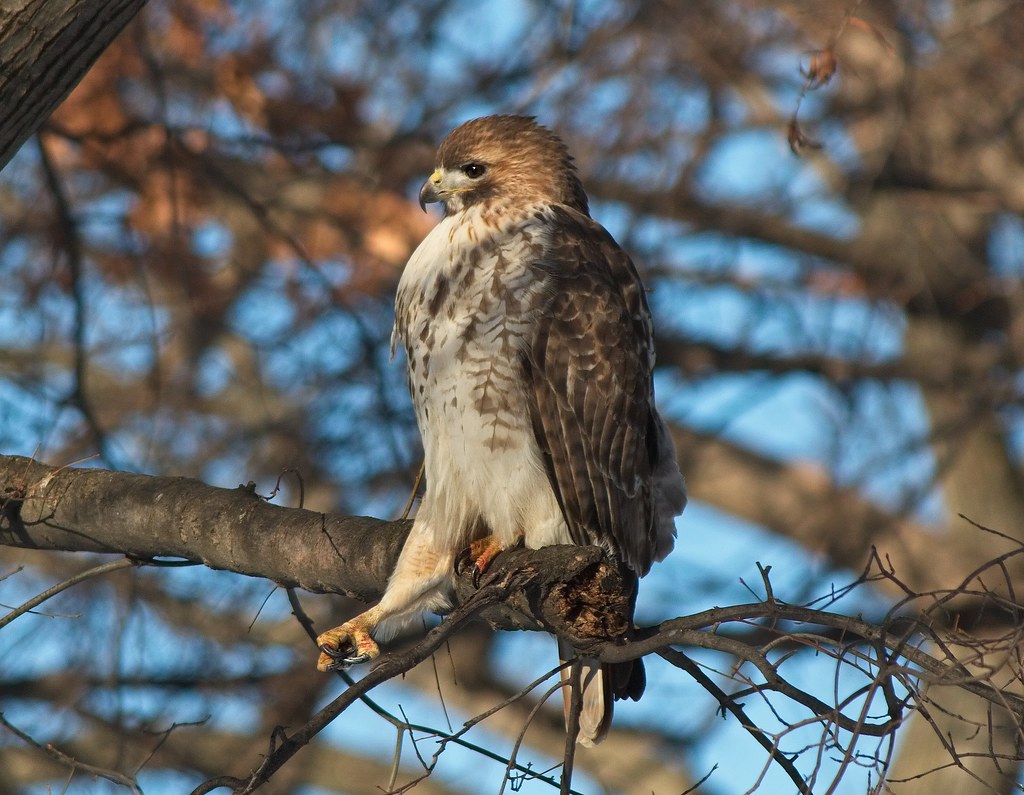 What happened next was interesting, although I don't have any good photos because it happened so fast.

Christo caught a rat and took it to a tree near the ginkgo nest.  I saw Nora fly into the park from the east and she landed in a tree about thirty feet from him and began to eat something.  Christo, still holding the fresh rat, put his head down, fluffed up his back, and took on an aggressive stance.  He remained frozen like that for about two minutes before suddenly screaming and lunging at Nora.  She took off so fast, she still had food in her beak and in her talons as Christo chased her in a circle, and then north to the basketball courts and out of the park.  I followed them, but snow on the ground prevented me from getting there fast enough to see where they went.

About ten minutes later, Christo reappeared in the same place and went looking for his rat, which was gone (it must have fallen from the tree).  He perched on a light pole and appeared to be hunting rats that ran around in the bushes beneath him, but too many people crowded around to look at him and he had to abandon his meal plans. I feel terrible for him when this happens as it must be so frustrating for him. 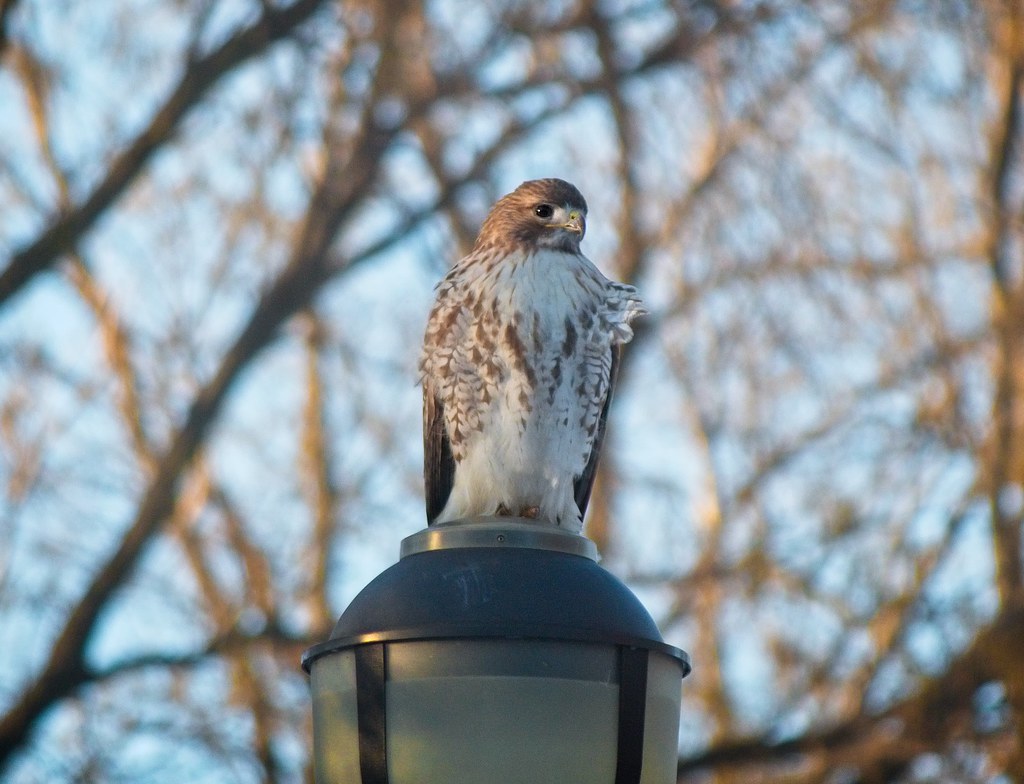 On Sunday, I found an immature red-tail perching in nearly the very same place Christo had been previously.  This one has remarkably bright eyes. 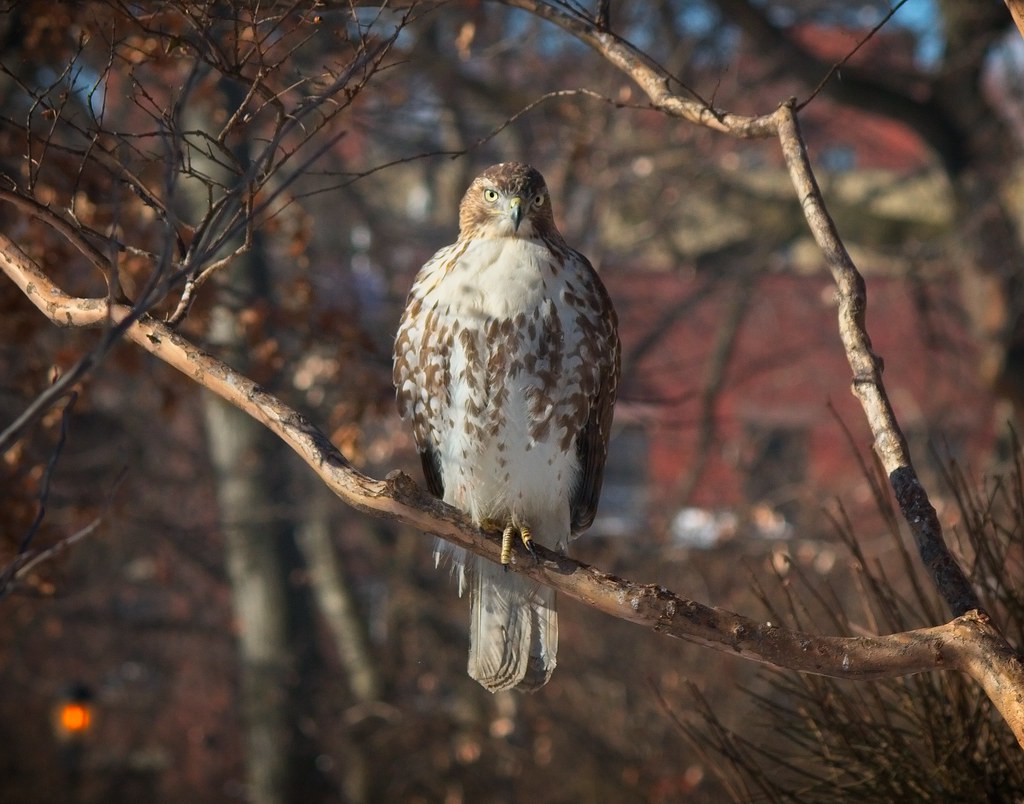 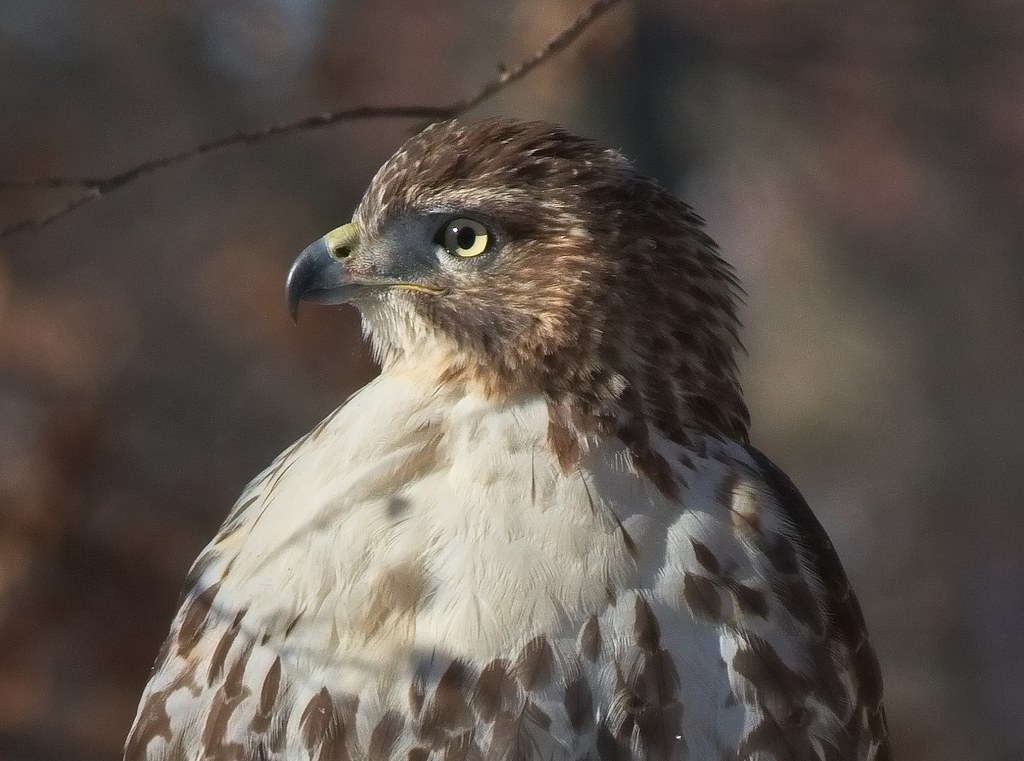 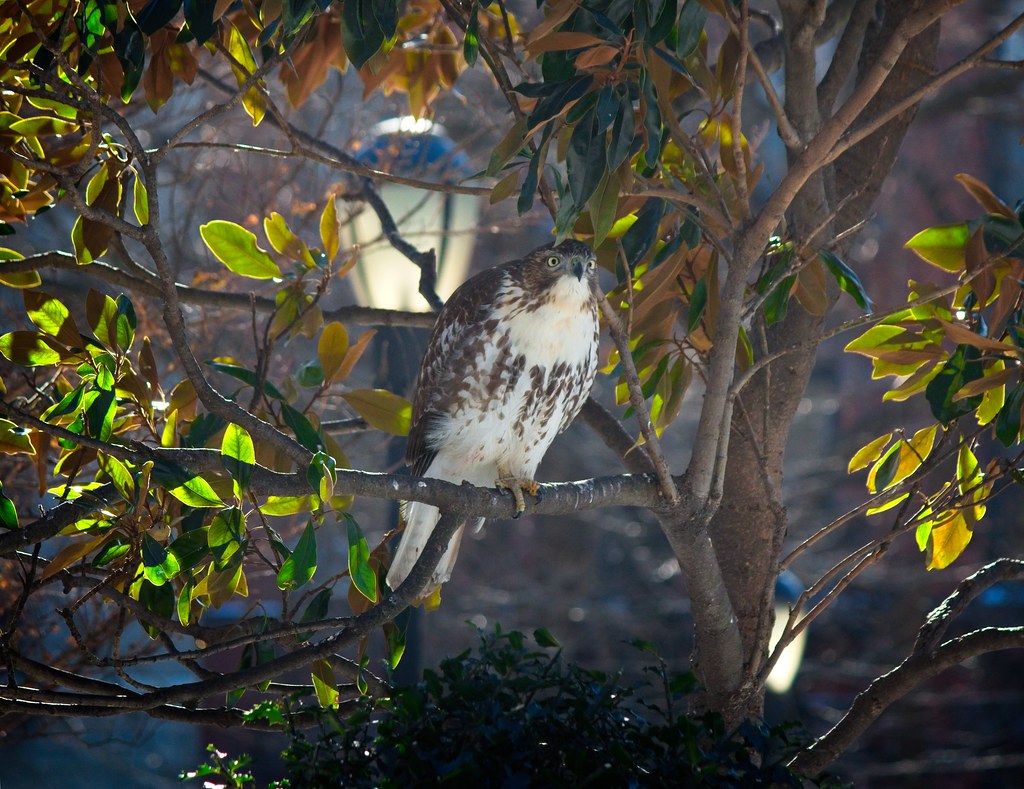 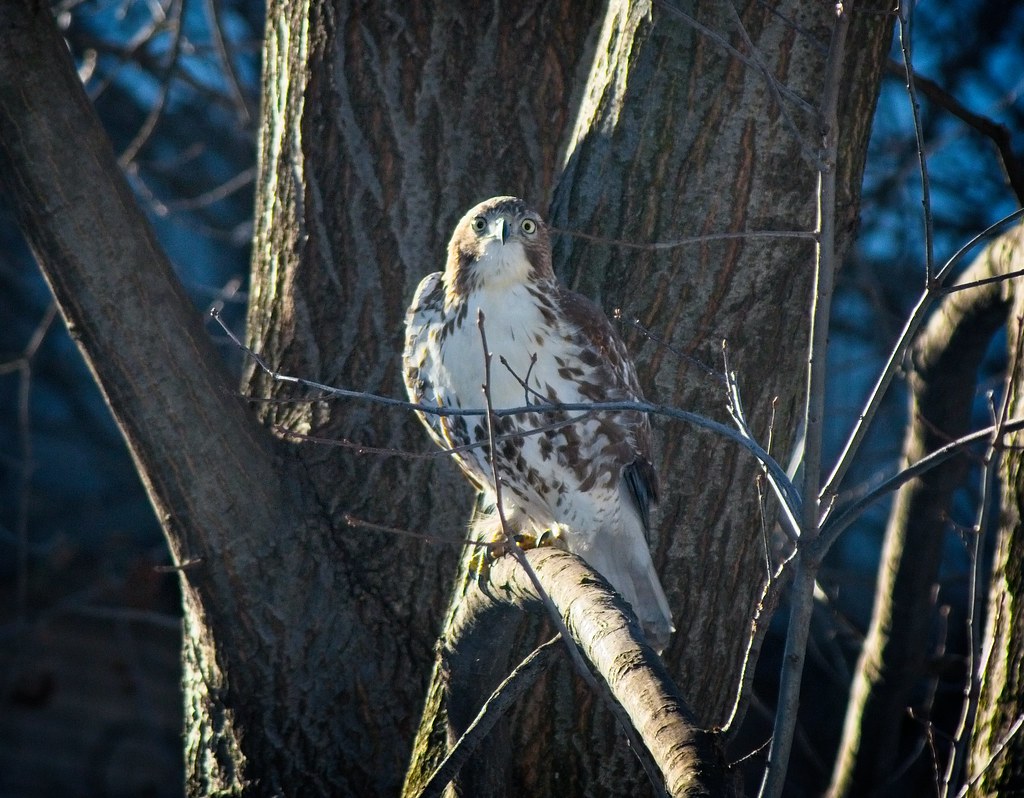 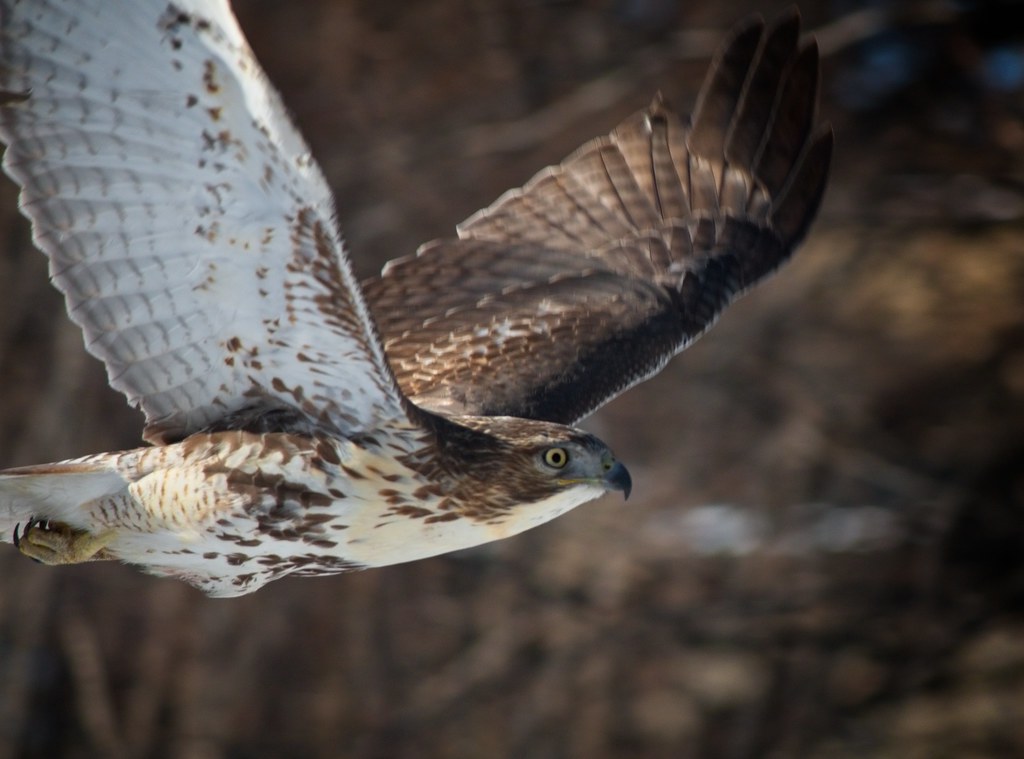 The hawk flew all over the park, chasing after pigeons, starlings, rats and squirrels.  It came to the ground near the St Mark's Place entrance and poked around rat holes under bushes before resting on a fence. 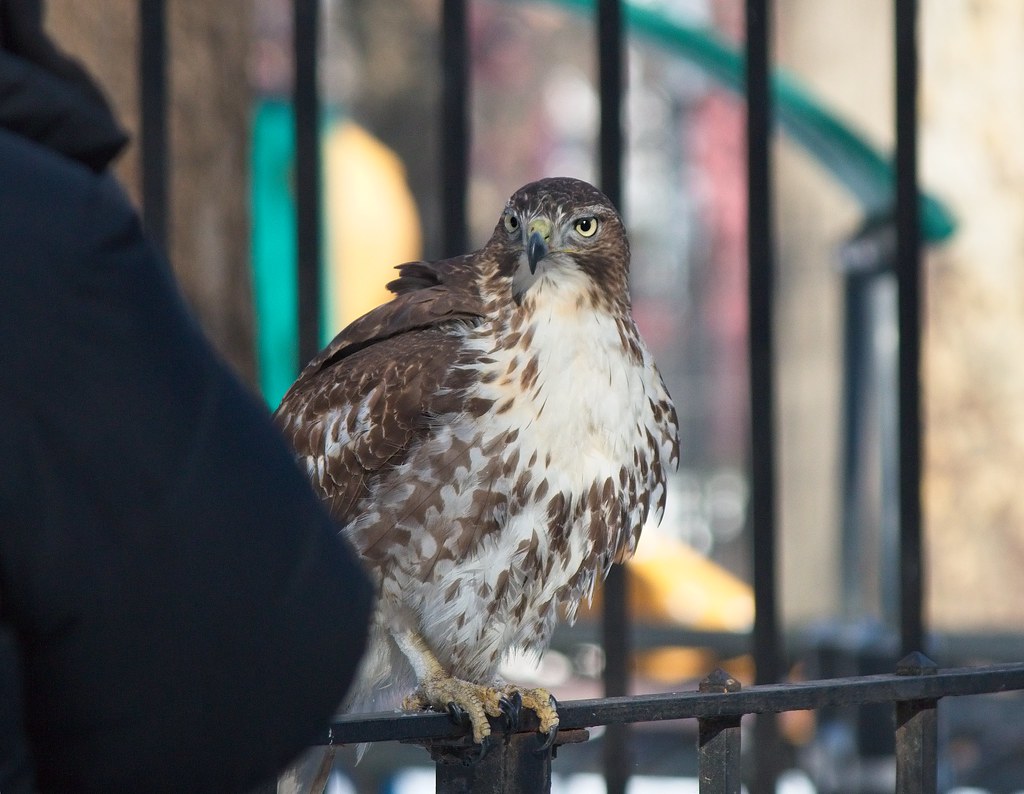 Eventually, it flew up to a cornice on 10th Street and Avenue A, scaring up a flock of pigeons. 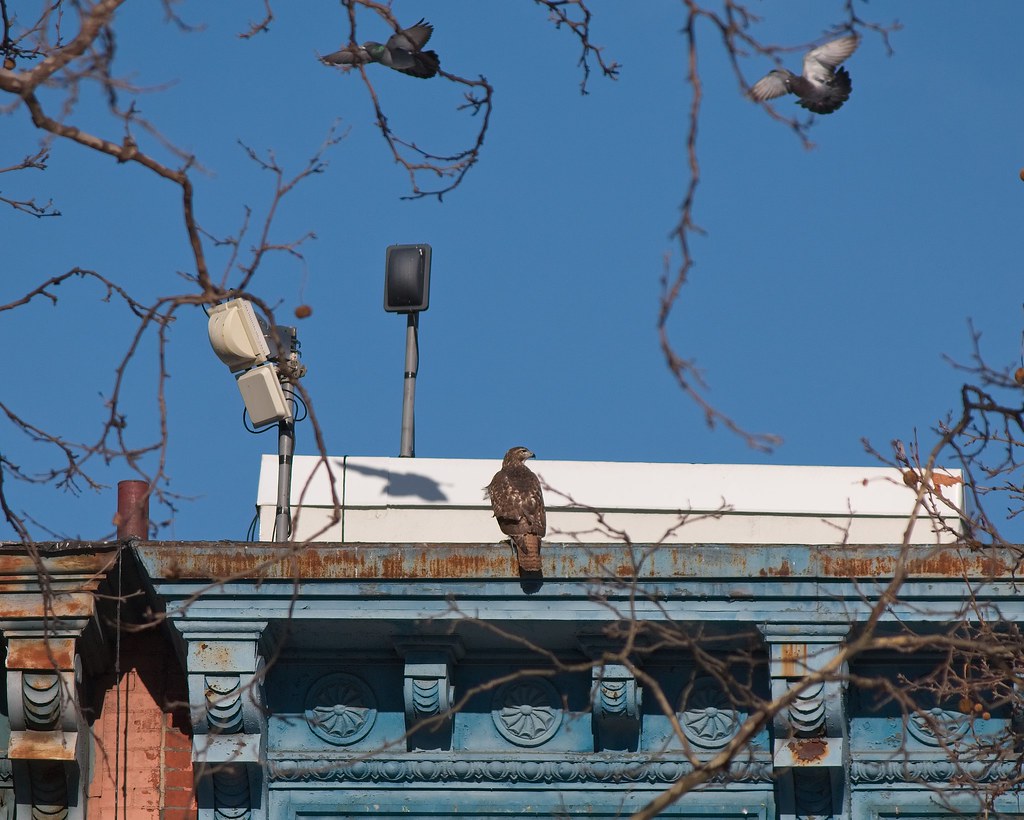 Just when I though the hawk would fly off, it nailed a pigeon who lingered on the roof and flew it to a tree by the skateboard/hockey area. 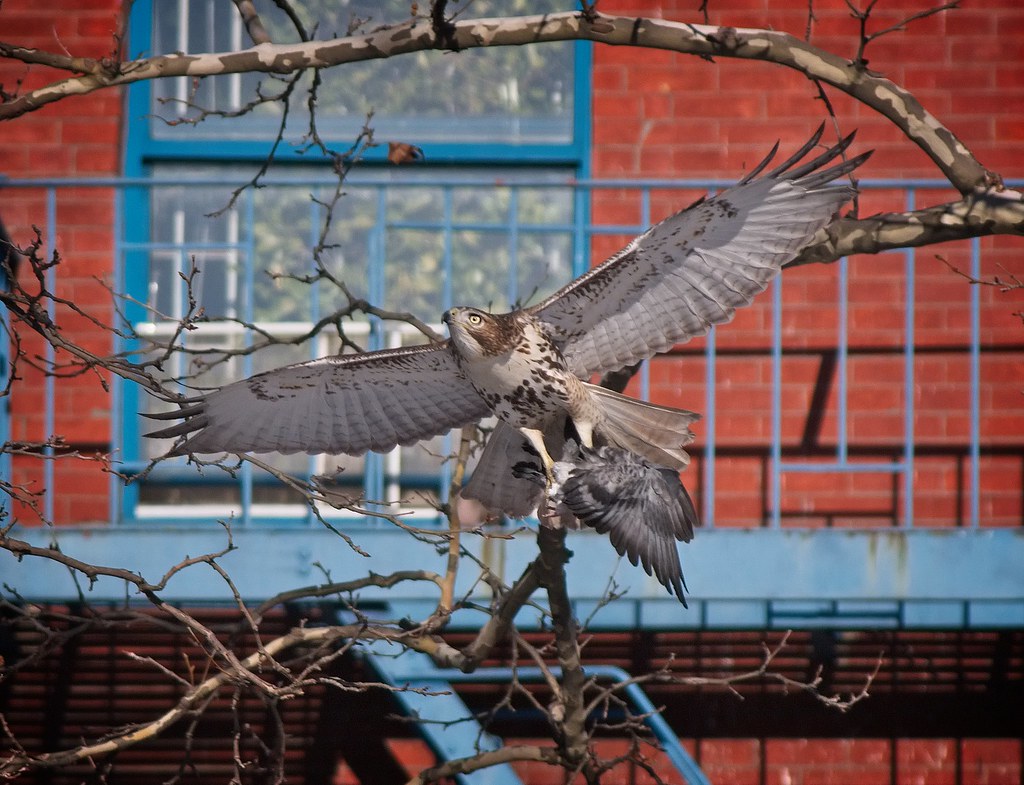 As the young hawk ate the pigeon, Christo appeared a block away atop the Christodora.  I expected him to come swooping over to chase the young hawk away.  However, he flew in an arc around the north side of the park and went up to the cross at St Nicholas of Myra on Avenue A and 10th Street, and took a closer look at the intruder from there. 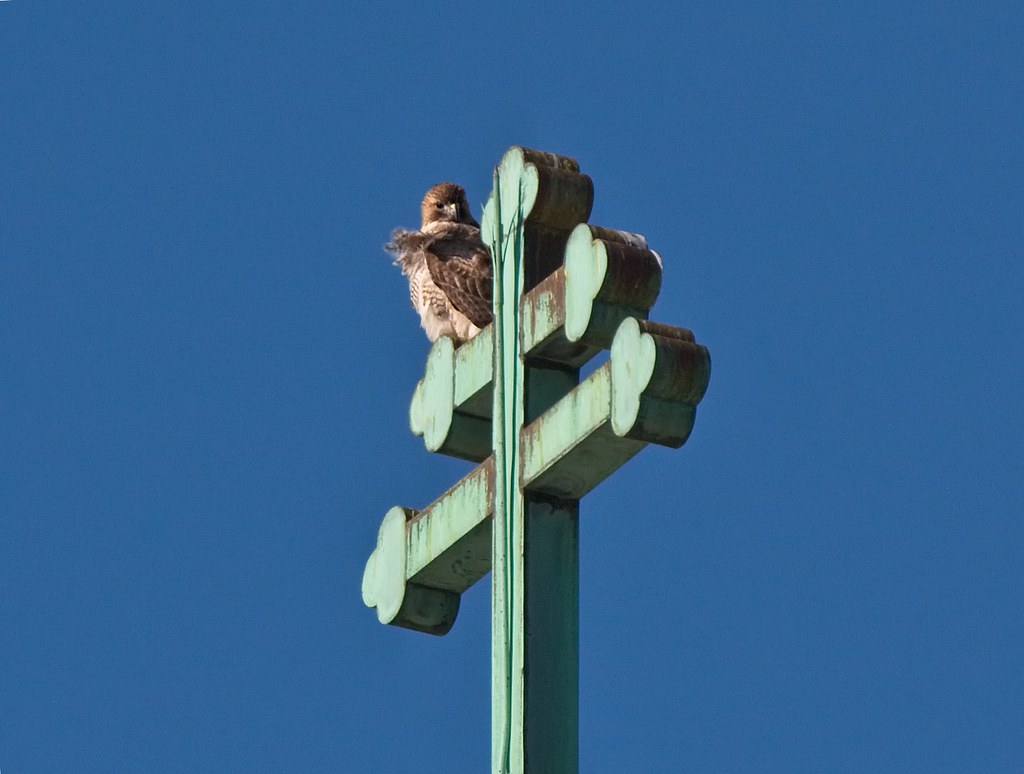 Again, I expected Christo to chase after the young hawk, as he'd done to another one in the same area a few days before, but Nora happened to fly by and he chased after her instead.  The two of them circled around before flying off towards First Avenue.

The bright-eyed hawk was left in peace, so spent about an hour digesting its lunch before taking off again. 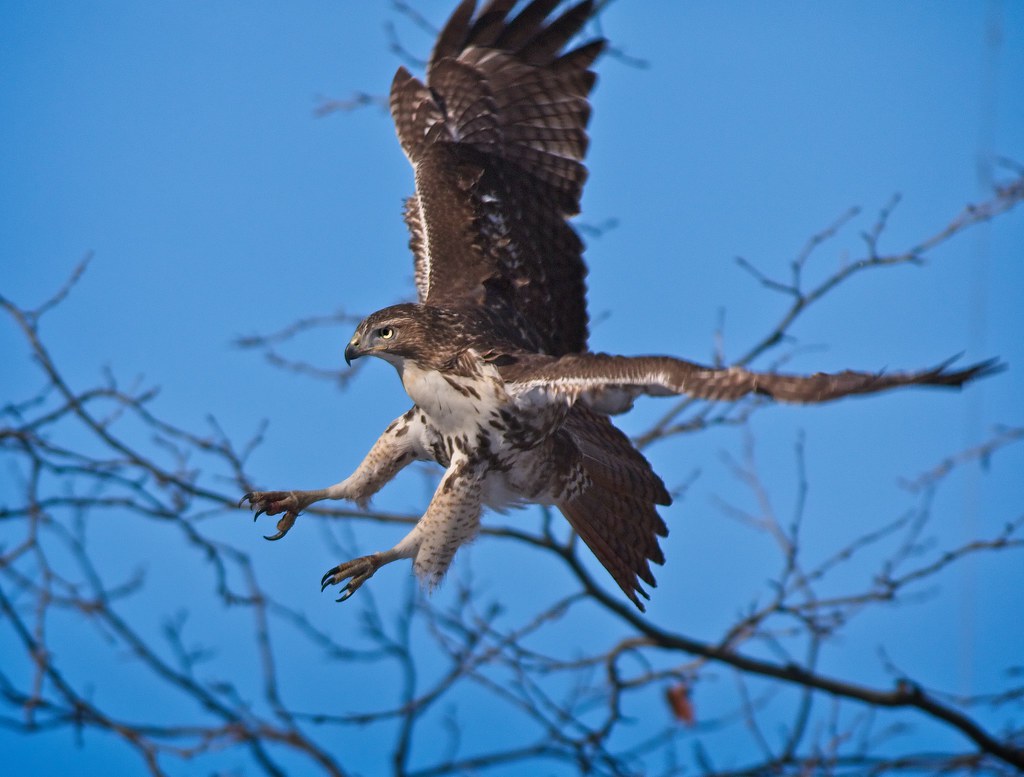 The hawk dropped down to the cyclone fence behind home plate in the play area and I got s good look at its tail.  I wondered if this could be Ten, which could explain why Christo was okay with it hanging around. This hawk has a distinctively reddish brown tail with two rusty feathers on the left side.  It also has brown barring on the legs.  Ten had dark spotted legs and a different tail, so this is not her. 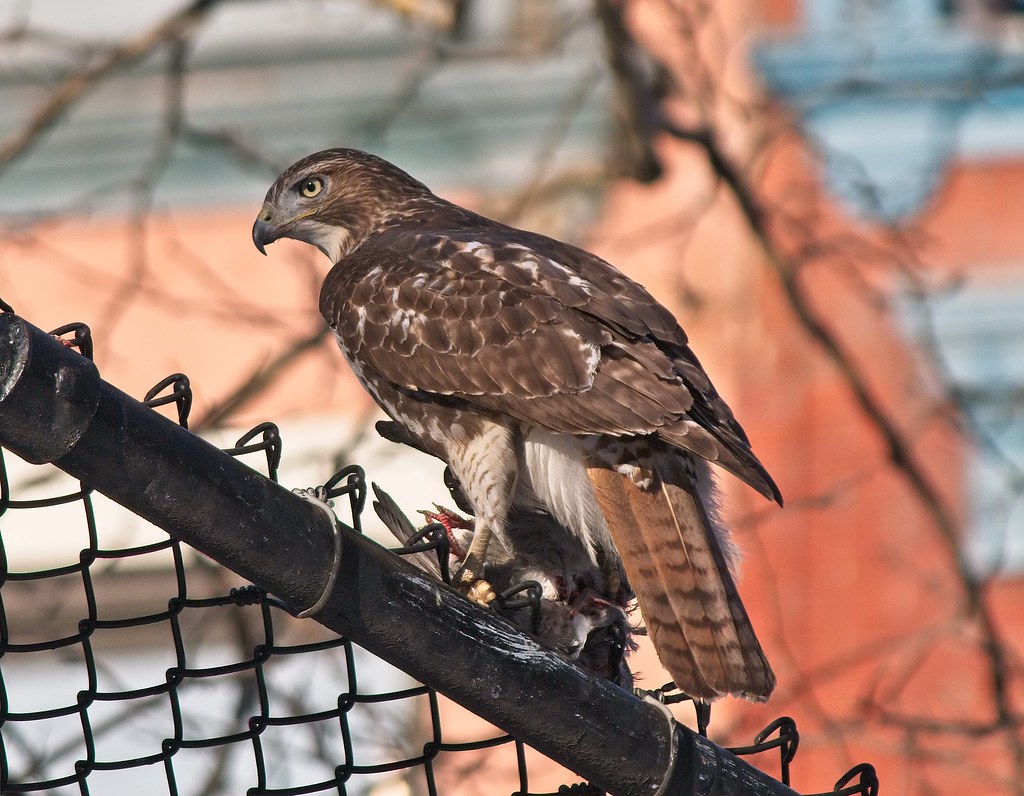 As it turns out, there was a dead pigeon on top of the fence, which is what the hawk was after.  It was so cold out, the pigeon was frozen to the fence and the hawk had to work hard to free it.  Note the pigeons on the rooftop in the background in the photo below.  One of their own had been snatched from there an hour before, but that didn't deter them from resuming their lives. 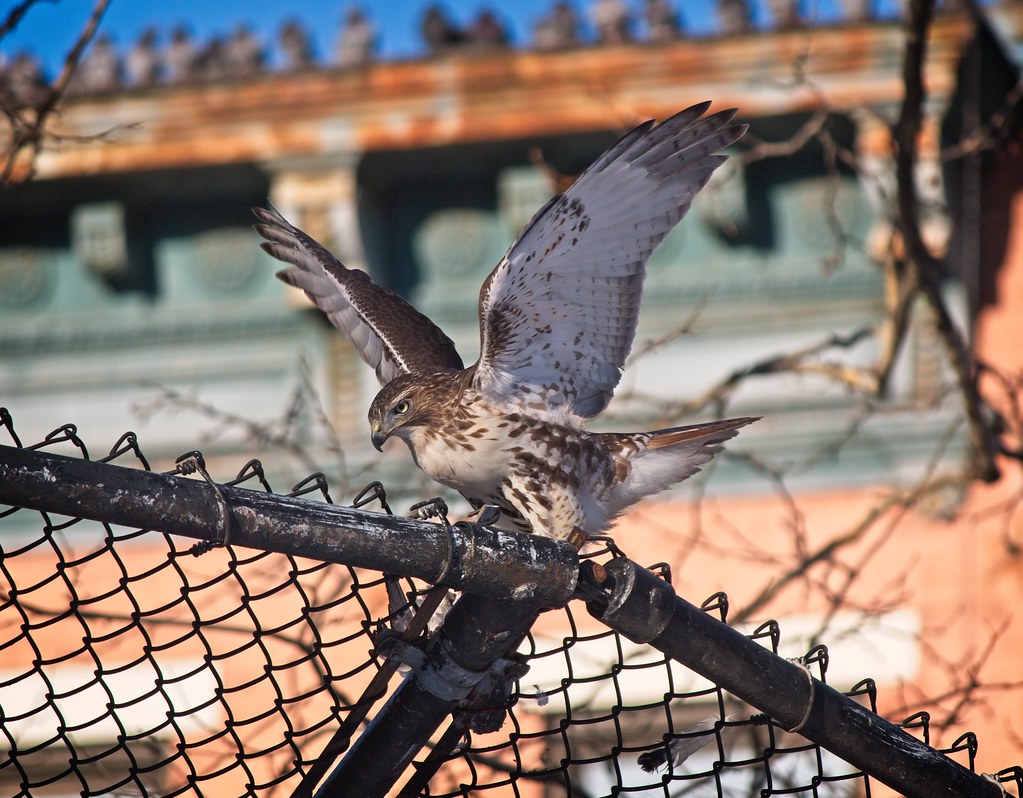 When the hawk finally took off, I could see the pigeon had no head.  Where did it go?  Is it still stuck to the fence??? 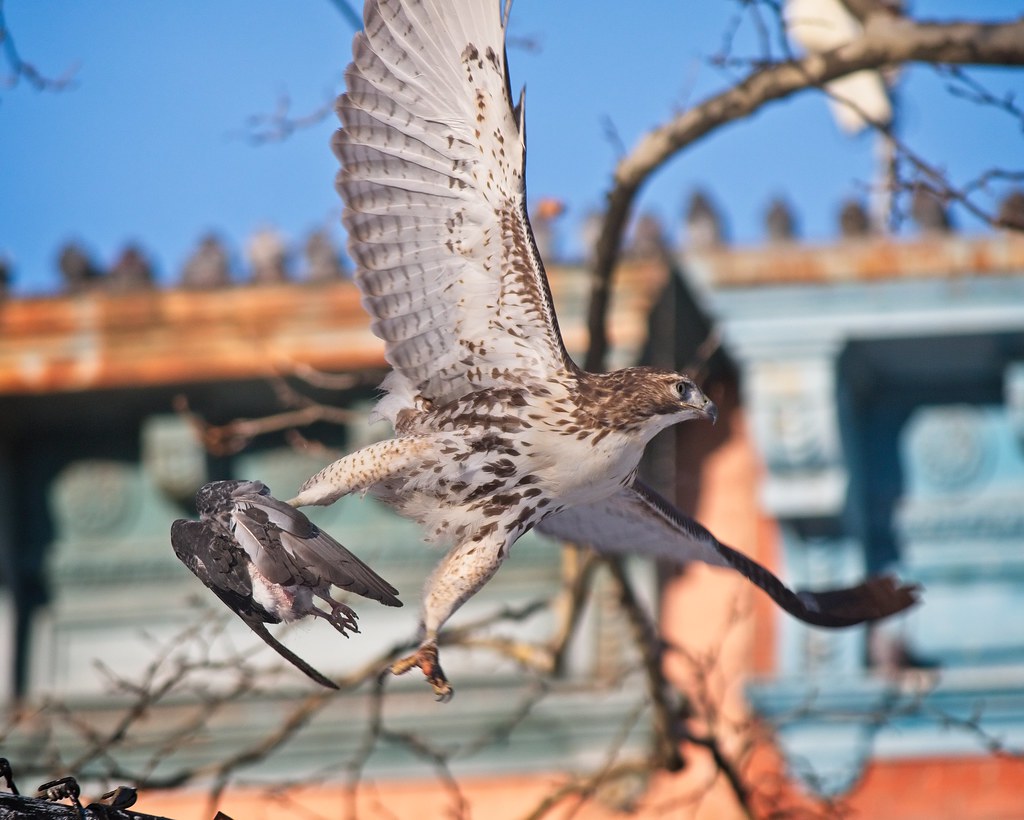 The young hawk had a second pigeon meal before settling in on a tree along 10th Street where I presume it went to roost.

As the sun was going down and I was freezing, I decided to make one more pass through the park before heading home.

I arrived just in time to see Christo catch a rat near the 7th Street playground.  He took it to a tree and popped the head in his mouth. 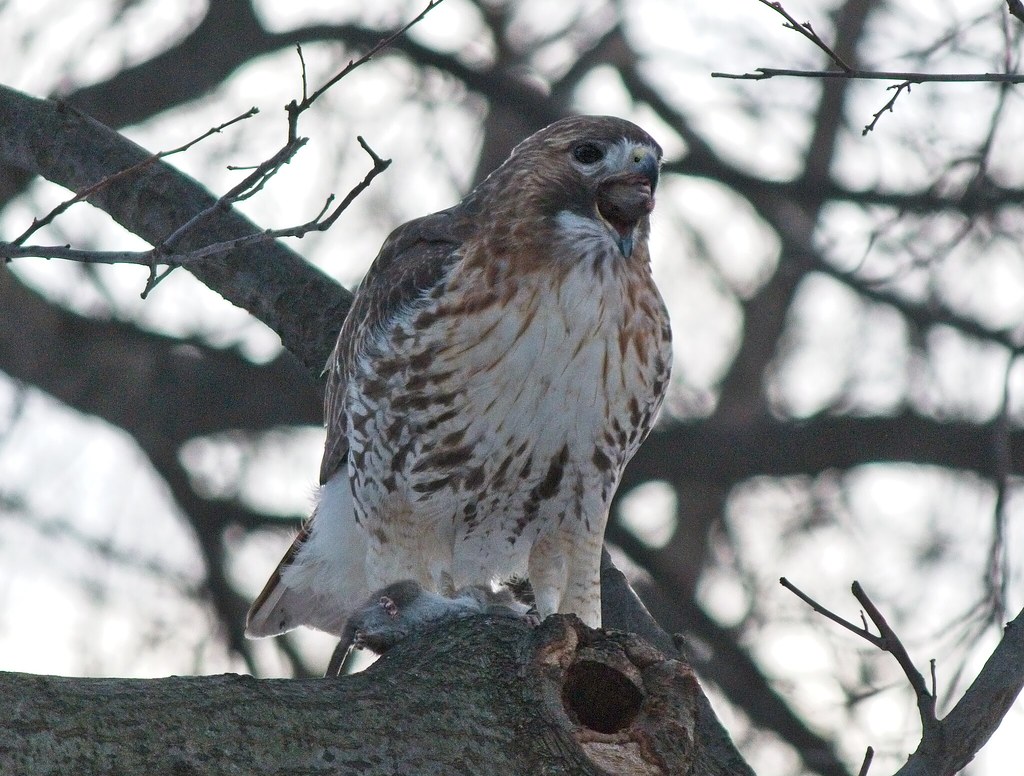 As Christo ate, Nora perched atop the Christodora, but did not come into the park.  After the rat was consumed, Christo went to work on the ginkgo nest, but she did not join him. 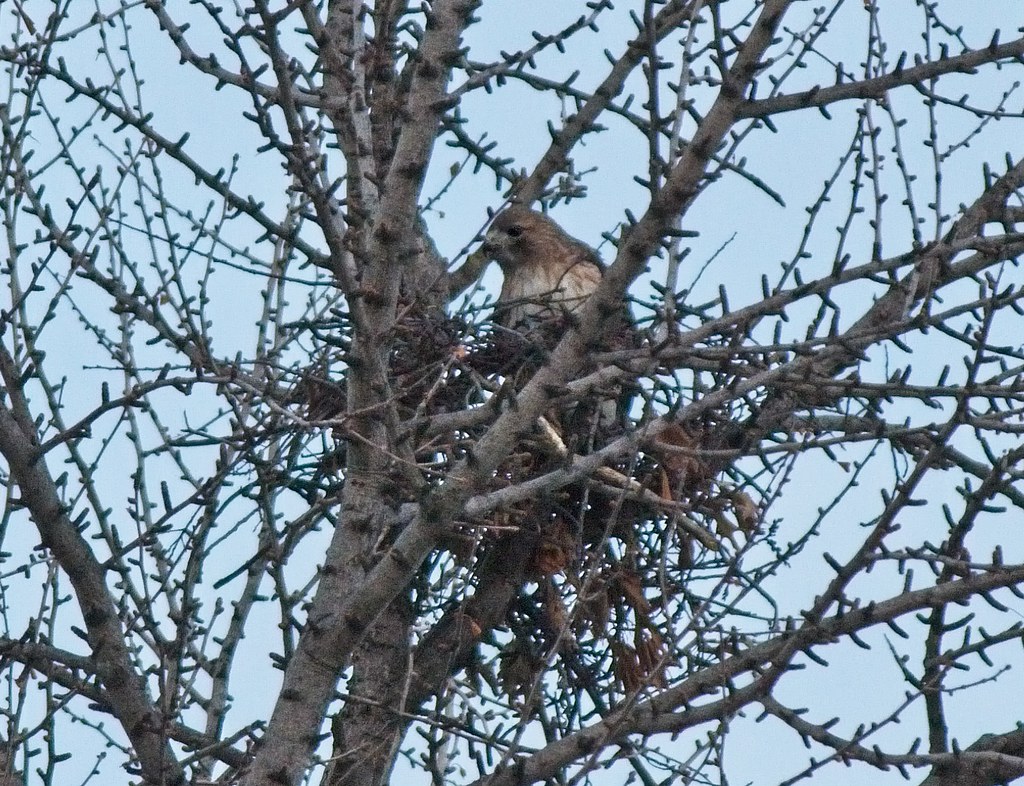 As my feet were frozen, I had to call it a day.