On Friday (March 9), I went down to the Baruch Houses south of Houston where I found two red-tails engaged in nesting activity.  One was flying around with sticks and taking them to an air-conditioner on a high-rise.  The other was on a nearby building vocalizing loudly.  The two hawks met up with each other, and I was able to get a good look at them.

In the photo below, the hawk on the air-conditioner was calling and the one on the roof was the one flying around with nesting material. 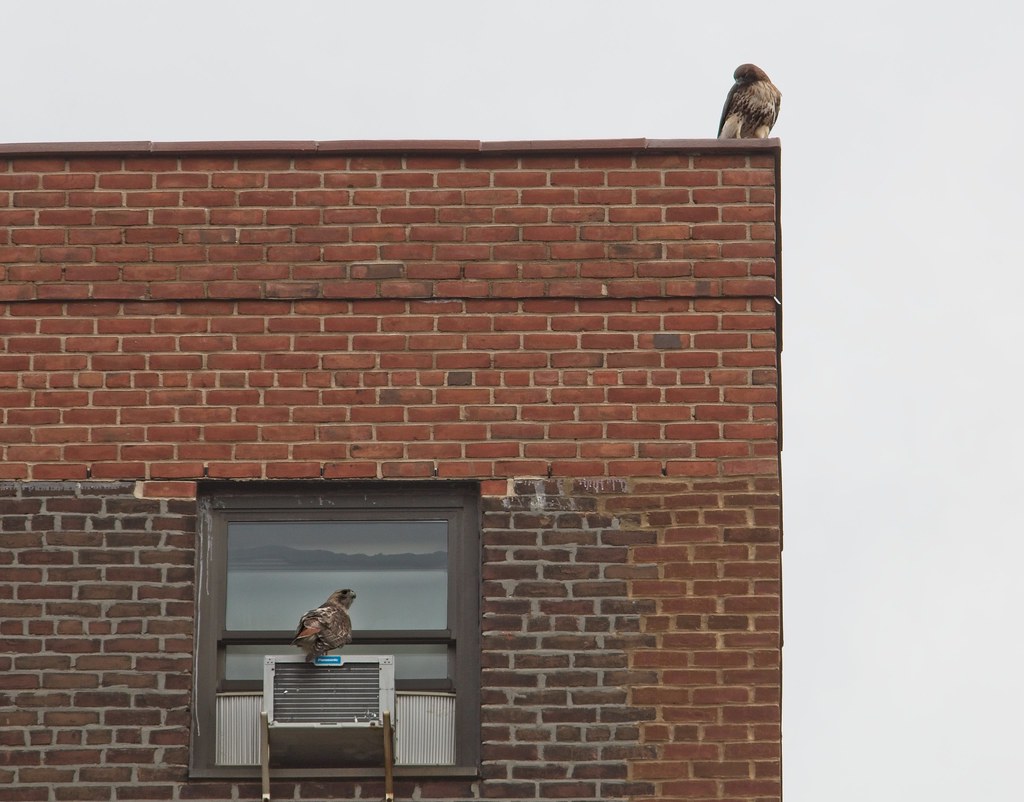 When I zoomed in, I could see the hawk on the roof was definitely Nora.  She has a distinctive face with gray feathers lining her eyes.  She's also large, with a lot of rusty brown pattern on her shoulders and down her flanks. 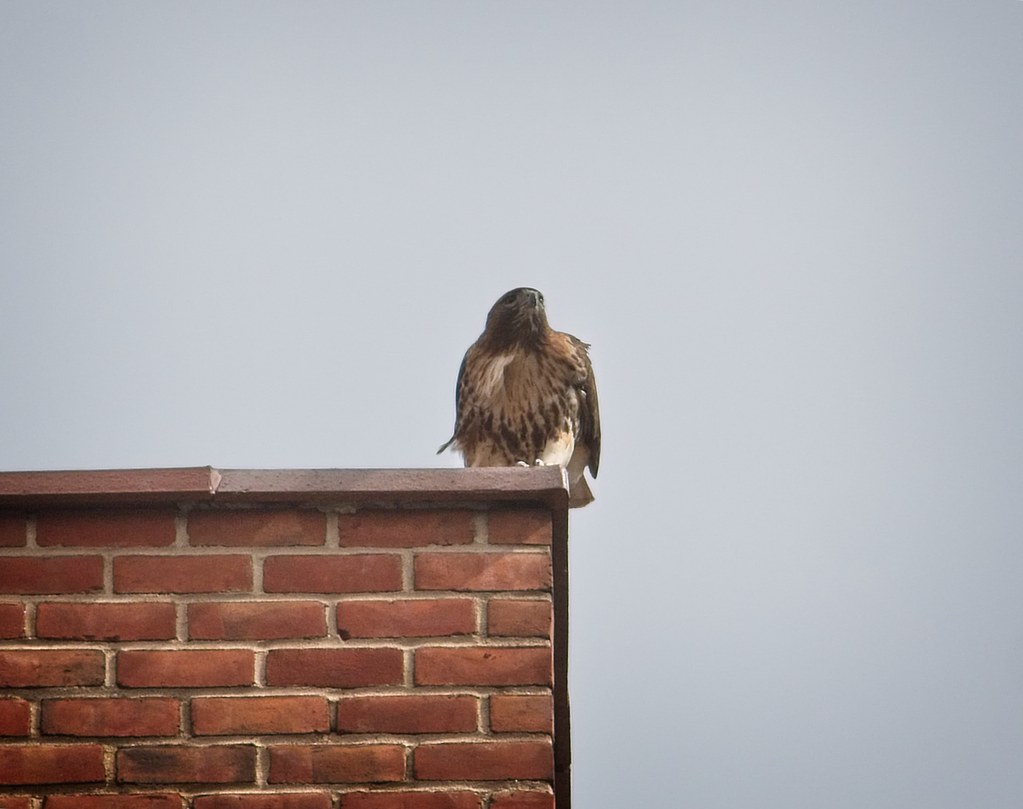 When I zoomed in to the other hawk, I was shocked to see it was clearly Christo! 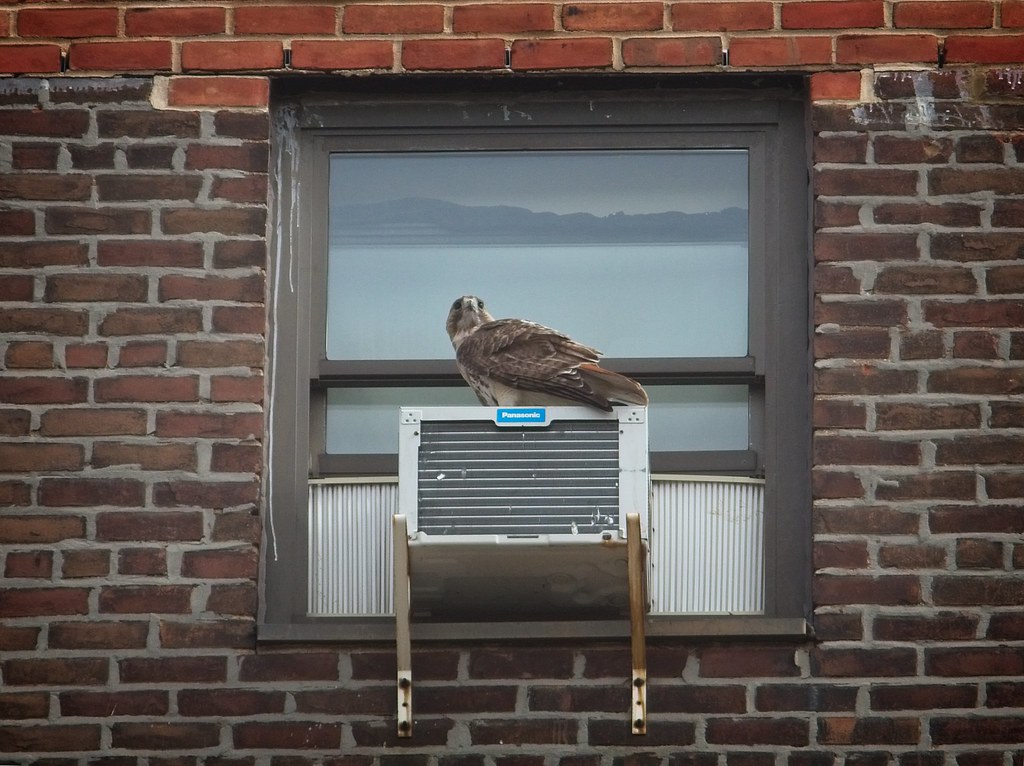 There's no mistaking his voice, golden square head, white throat and light chest.  When he took off, I could see his legs which have light brown barring.  He was carrying a small rat and was calling to Nora to come get it. 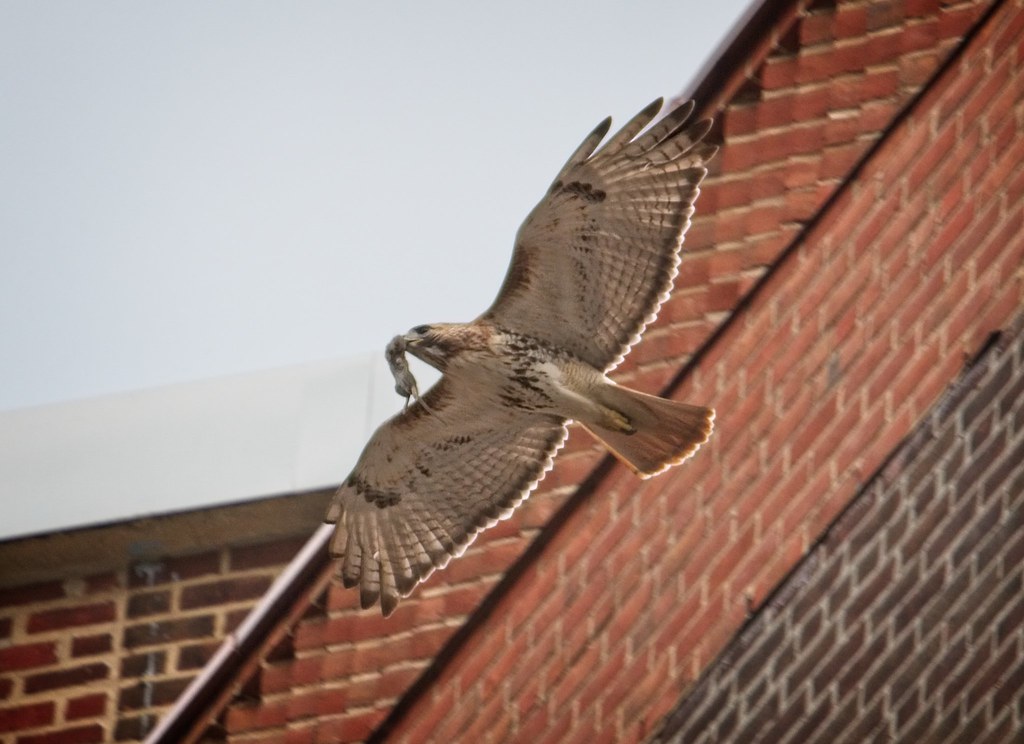 After flying the rat around to a few locations where Nora refused to go, he ended up taking it to her as she perched on an antenna on top of a water tower. 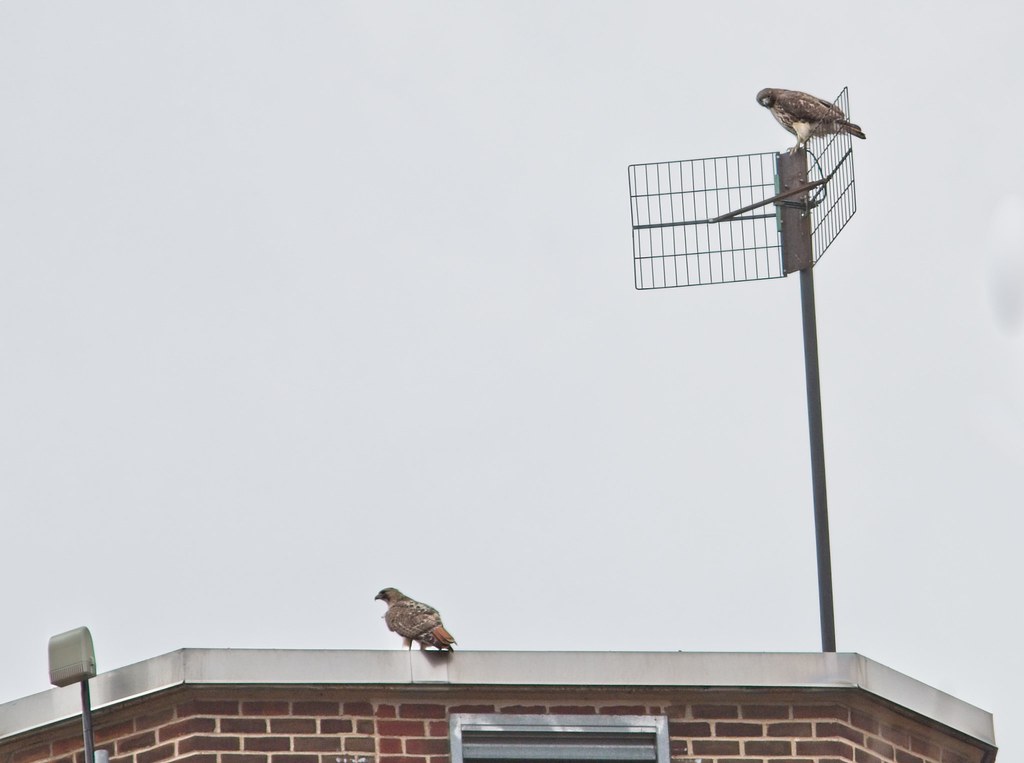 Christo left the rat on the rooftop and then flew up to Nora and mated. 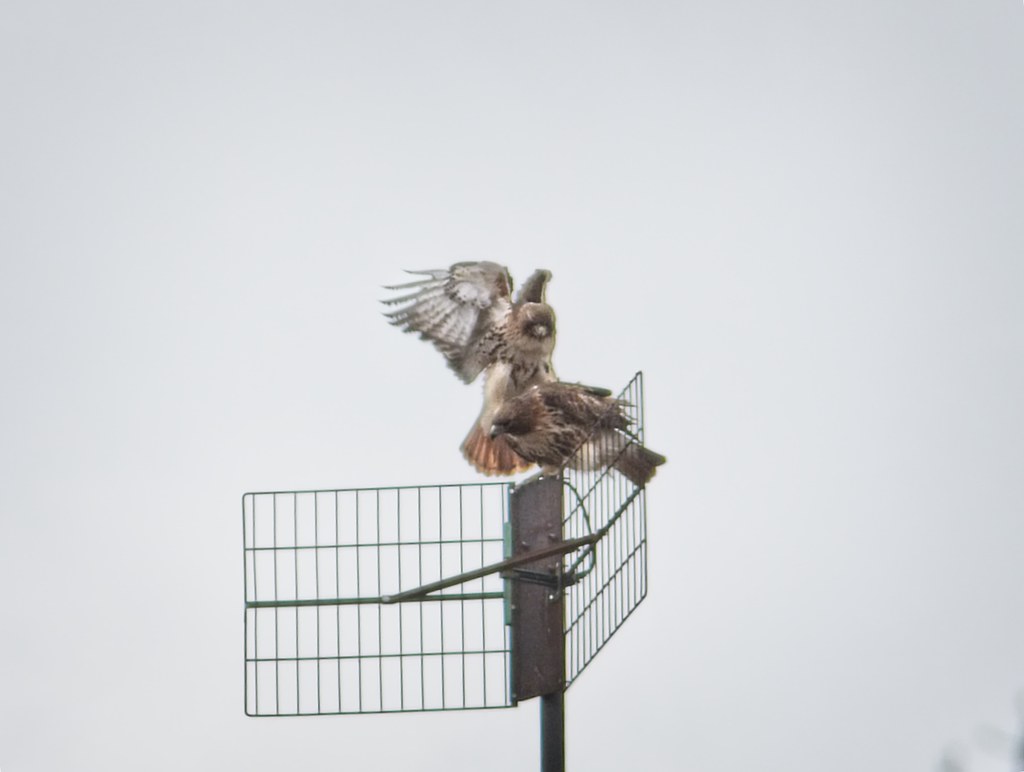 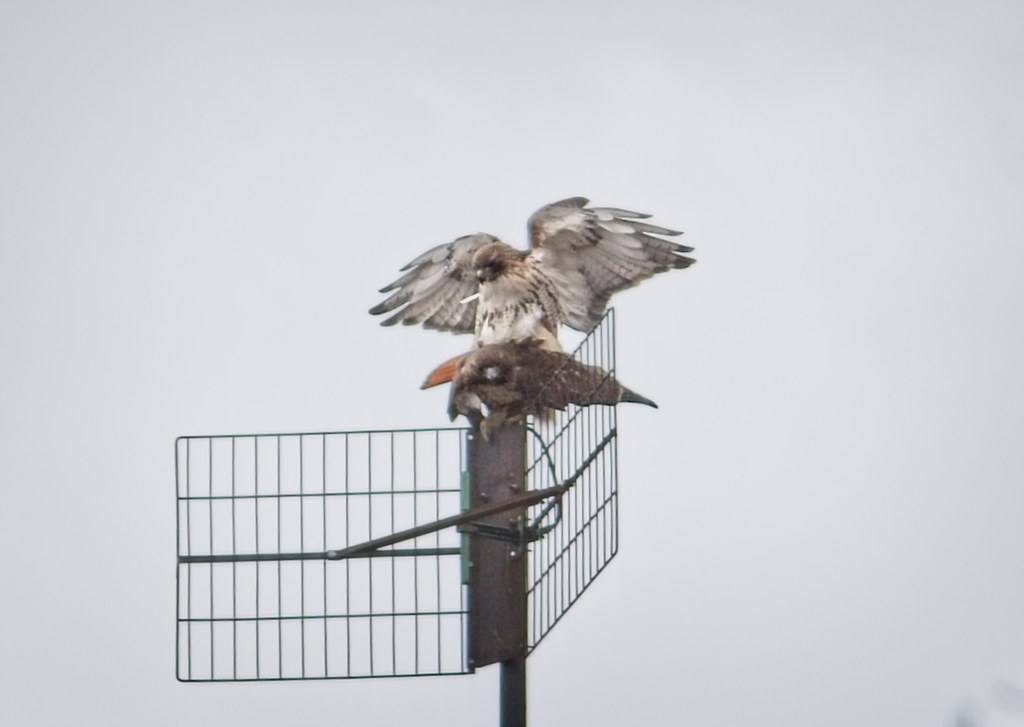 Afterwards, he took off and she ate the rat.

I don't know why I was so shocked to see Christo in this location. I guess I expected to find another pair of hawks.  Seeing Christo and Nora together got me thinking and I now have a theory about how they came to be together -

In addition to Christo and Dora, there has been a second pair of red-tails on the Lower East Side for quite some time, at least a year.  I don't know if they nested last year, but they were definitely around. A few months ago, there were reports of a dead hawk on an air-conditioner at PS188 on East Houston.  I think that hawk may have been Nora's mate.  Around the same time, or a short while later, Dora went into rehab, so Nora and Christo were suddenly single neighbors.  I think they were close enough to be acquainted and it was convenient for them to team up.  This would explain Nora's odd behavior, being so uninterested in spending time in Tompkins Square and her reluctance to participate in building the ginkgo nest with Christo.  She already had her own territory in the Baruch Houses and preferred to spend her time there. 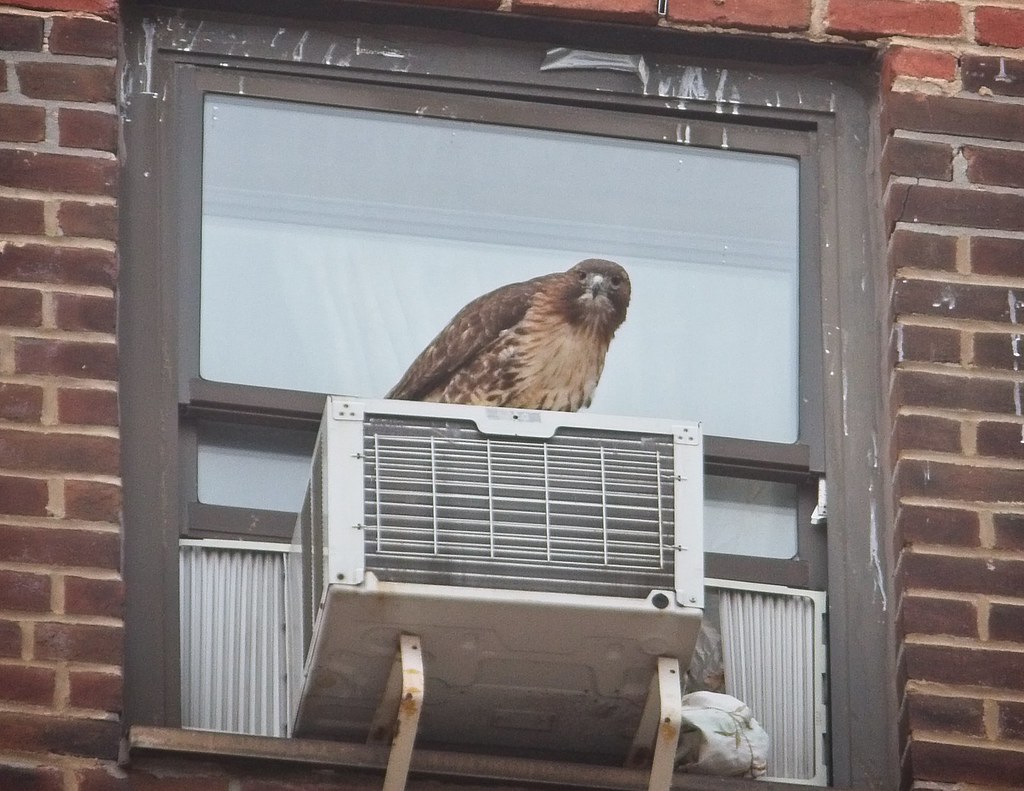 Nora/Barucha eating lunch on an air-conditioner.

This is just a theory, but it makes sense to me.  Nora seemed to prefer perching on buildings and seeing her in her element in the housing complex, she looked much happier and 'normal' than she did in Tompkins Square Park where she appeared glum.  When Dora was returned to the territory, there probably wasn't any violence between the two females because they likely already knew each other and knew they each had separate territories.

I'm thinking of calling Nora "Barucha" since it reflects her territory.  She is much more than "Not Dora" and Nora/Dora can be confusing in conversation.  The people I spoke with in the area didn't seem to be calling her anything, or I would use that name.

Let's put it to a vote!  If you have a preference between Nora and Barucha, cast your vote here -

On Sunday, after fulfilling his commitments with Nora/Barucha, Christo returned to Tompkins Square, triumphantly landing on top of the Christodora. 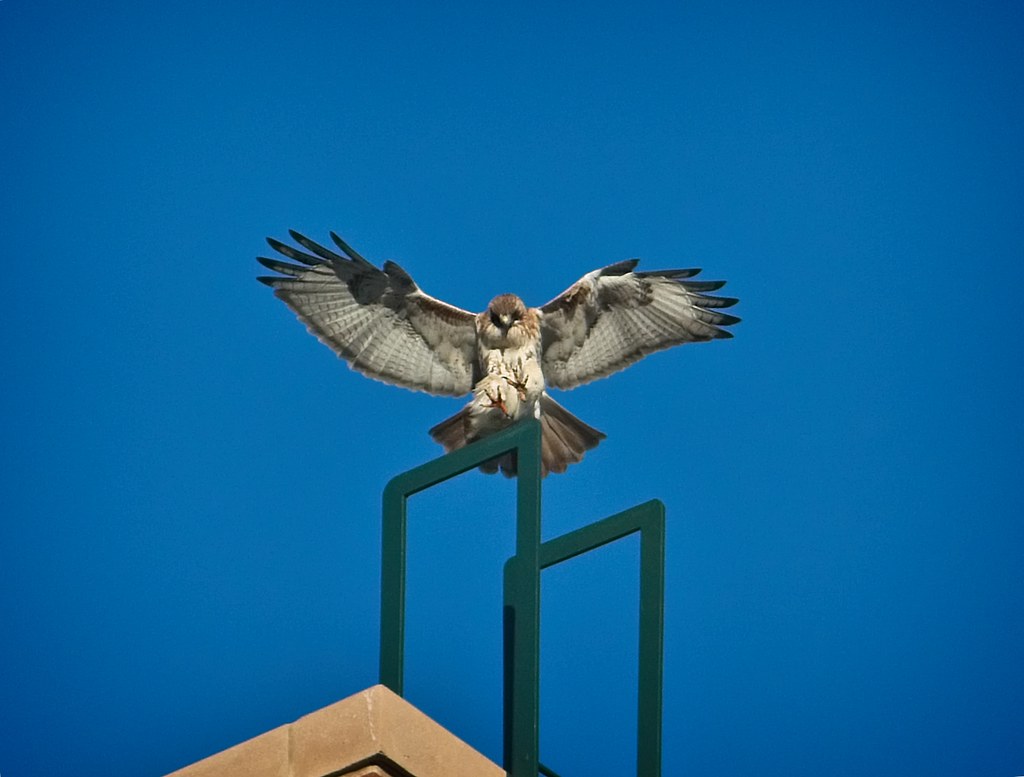 Below him in the park, Dora perched low in a tree and watched people as they passed by.  Seeing her so close is definitely a new phenomenon.  Before going into rehab, Dora kept her distance, preferring to stay high in the trees and not very visible.  Since being away, her tolerance of human activity seems to have increased. It's nice to see her so relaxed. 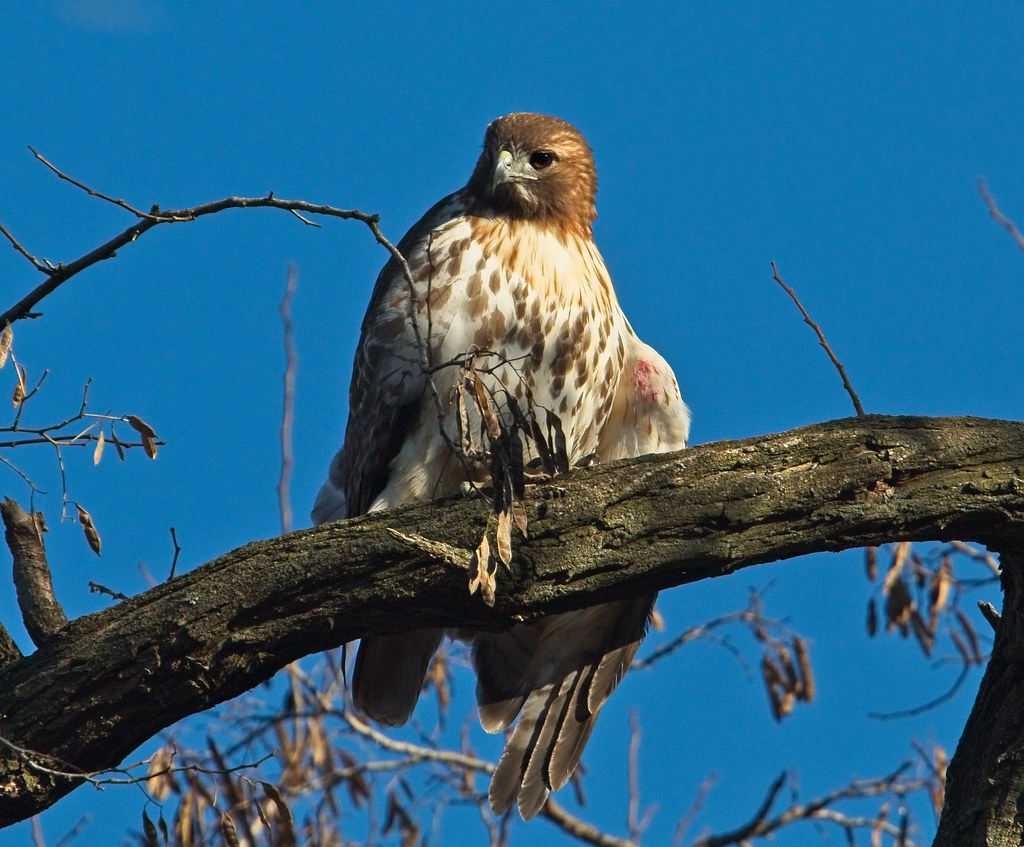 As a small gathering of people watched, Dora surprised me by diving down to the ground and catching a rat.  I've only seen her hunt a handful of times in the last 4.5 years, so I was shocked to see her nab something so publicly.  Her strength and skill levels are great and her wonky wing is not preventing her from taking care of herself. 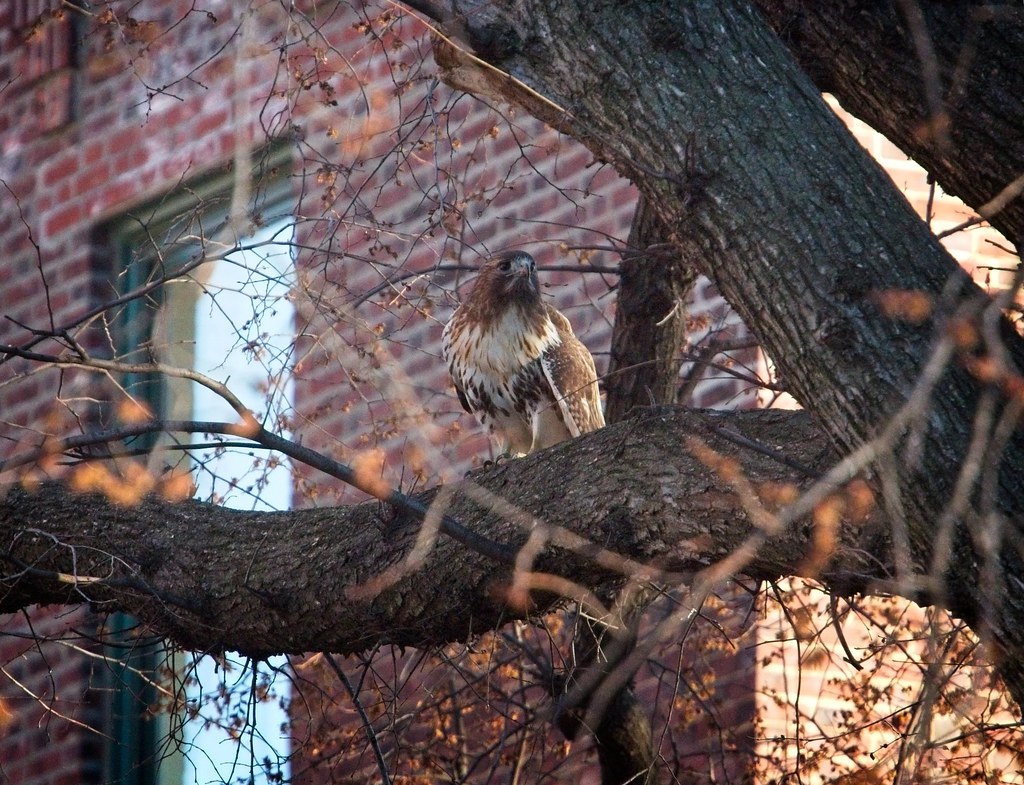 Dora took the rat to a tree where she quickly ate it.  She and Christo did some late afternoon chores at the nest, then both went to roost - he stayed in the park while Dora went to a nearby fire escape. 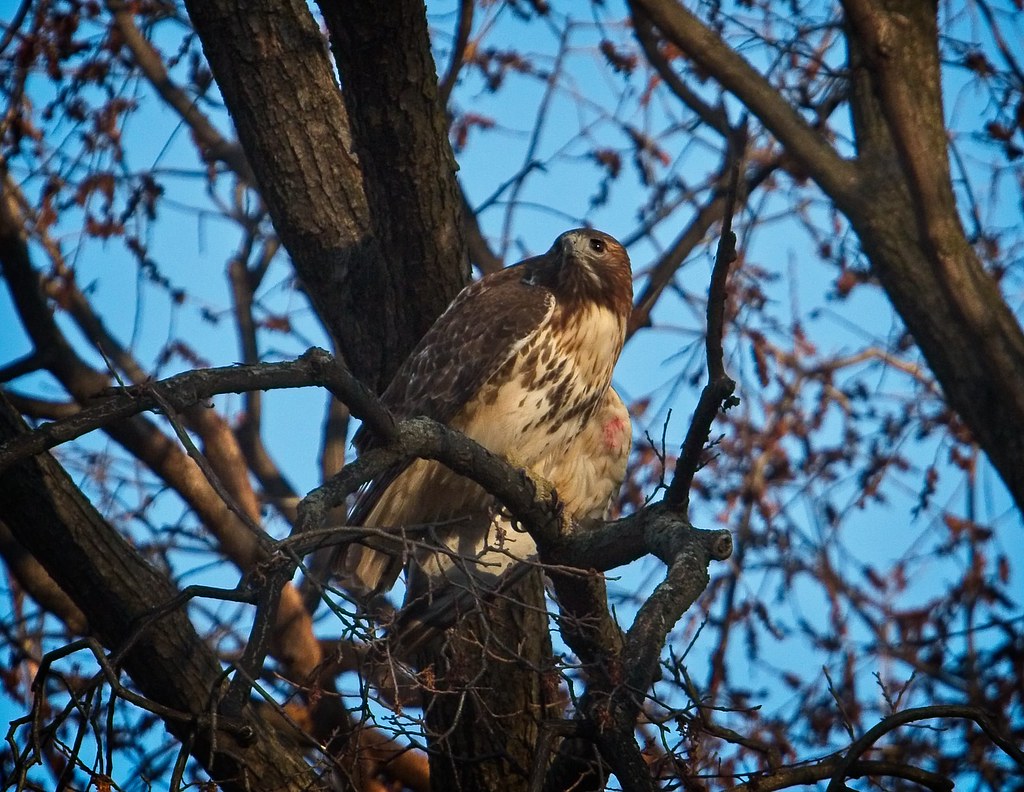 The exciting news, however, is that fellow hawk-watchers saw Christo and Dora MATING in the park on Saturday evening.  This gives us hope that Christo and Dora will have another brood this year.  It's still too early to know for sure, but things are progressing as they should. 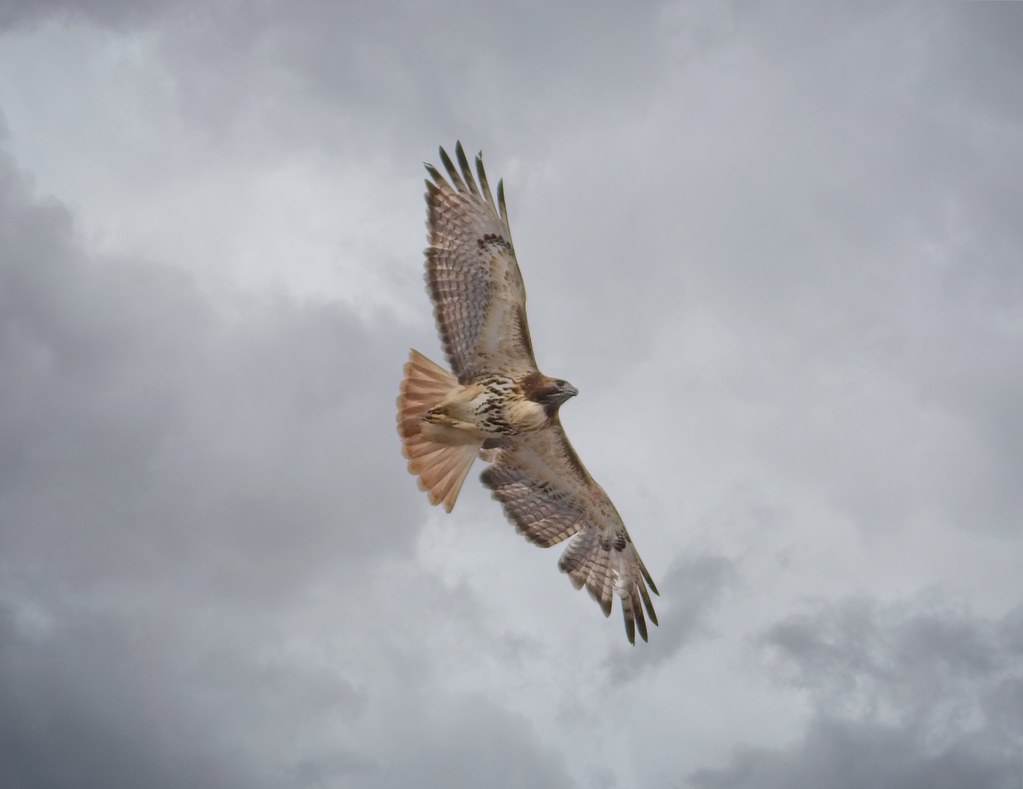 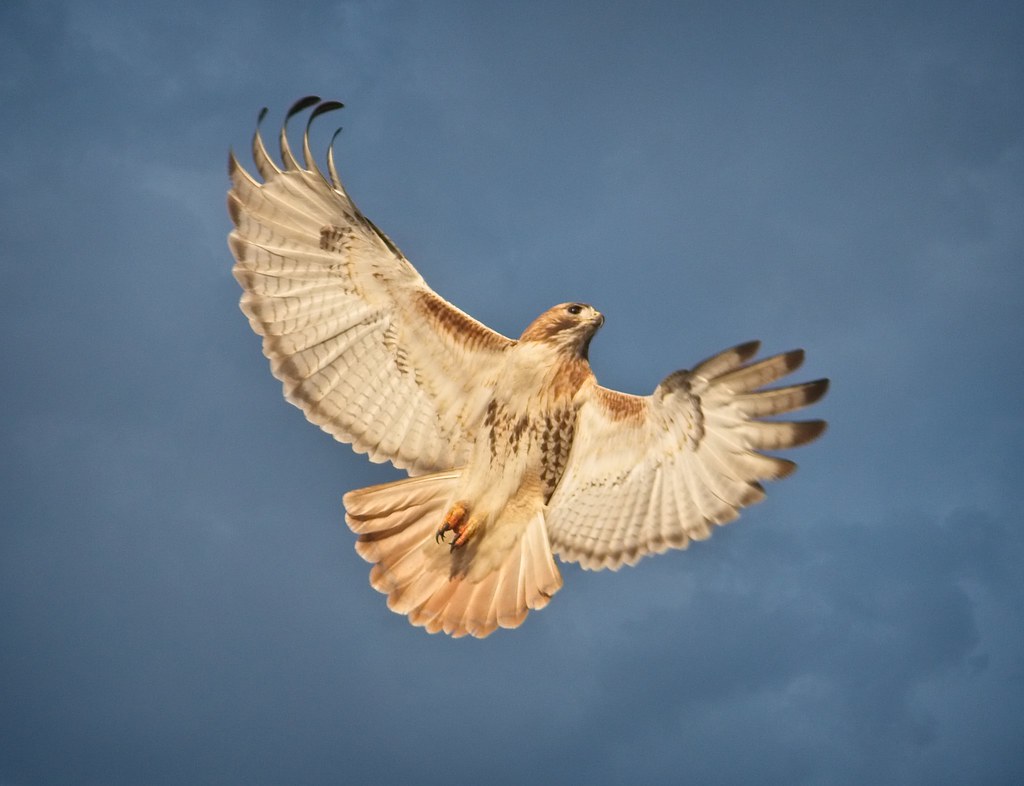 Posted by Laura Goggin Photography at 10:09 AM