We're on egg-watch for Christo and Dora in Tompkins Square

The Washington Square Park hawks have two eggs so far, but we are still waiting for eggs in Tompkins Square.

Last year, Dora laid their first (perhaps only) egg on or around March 14.  It seems all the city hawks nests are running a bit late this year, but Christo and Dora also went through the extra trauma of Dora's injury, subsequent absence, and then the introduction of Barucha/Nora.  Christo and Dora seem to have settled into a routine of nest-building, mating and eating together, so we can expect egg-laying any time.

On Monday, I caught up with Dora who was perched on the cross of St Brigid's church on Avenue B, just across the street from her nest. 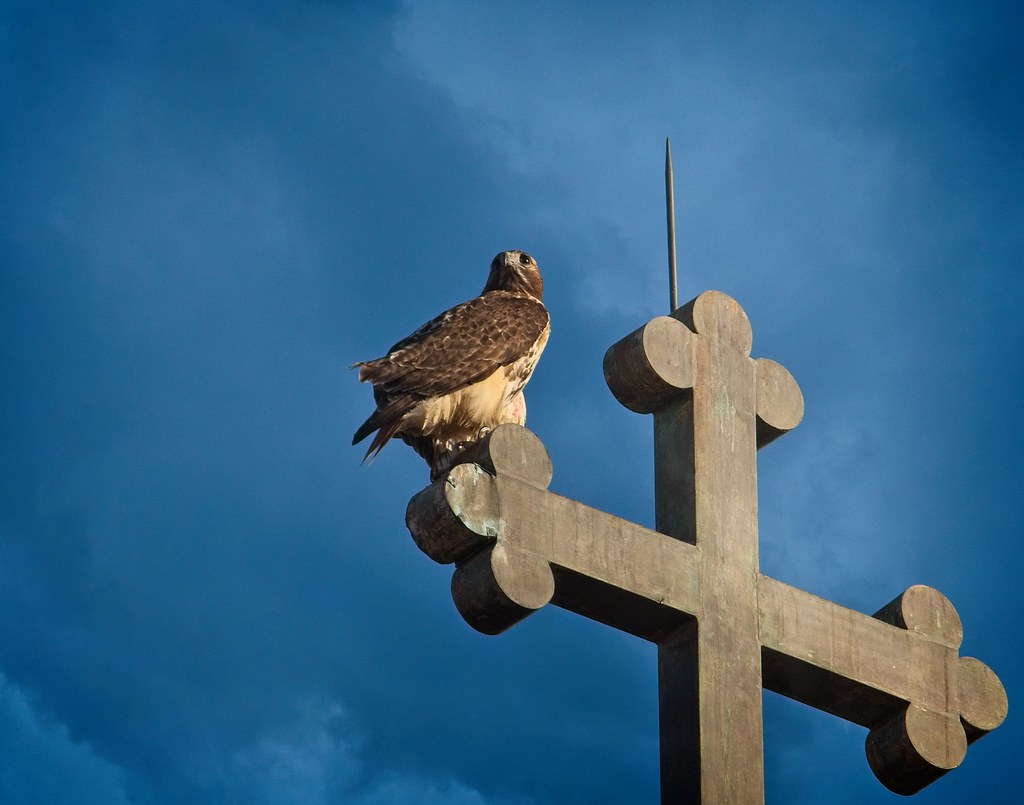 As Dora relaxes, her wonky left wing flops out, but it doesn't seem to bother her or affect her flying ability.  It's become an easy way to identify her at a distance. 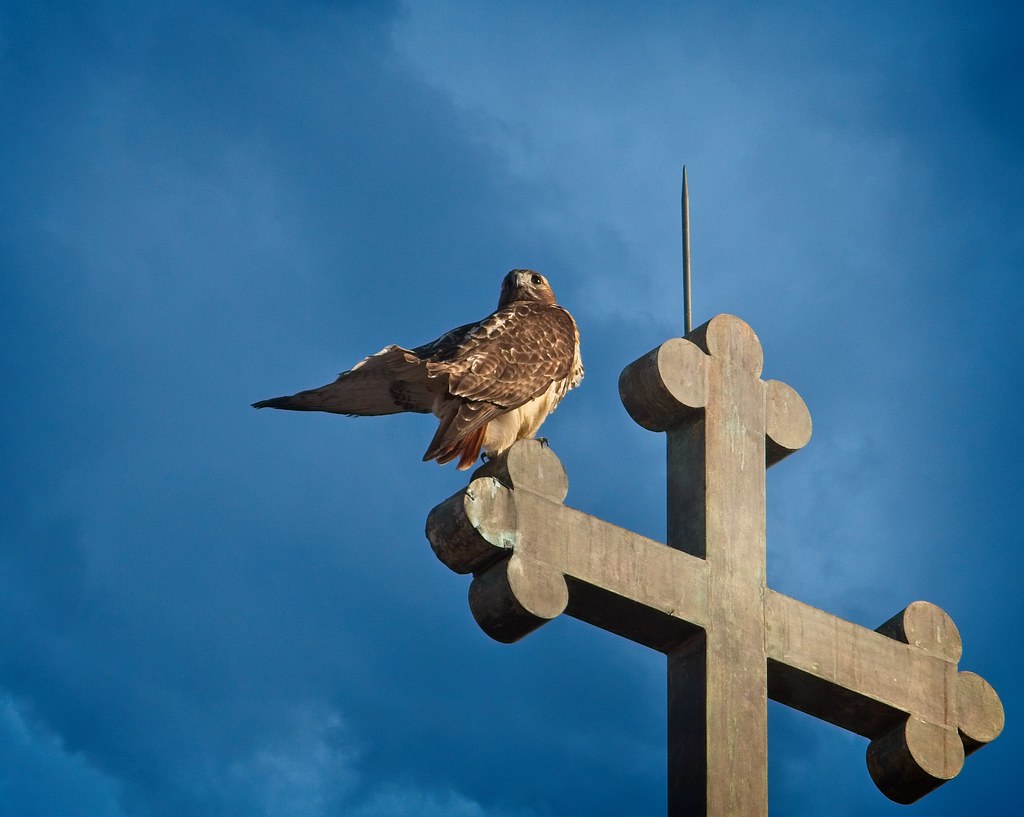 As she perched, Christo dropped in for some mating. 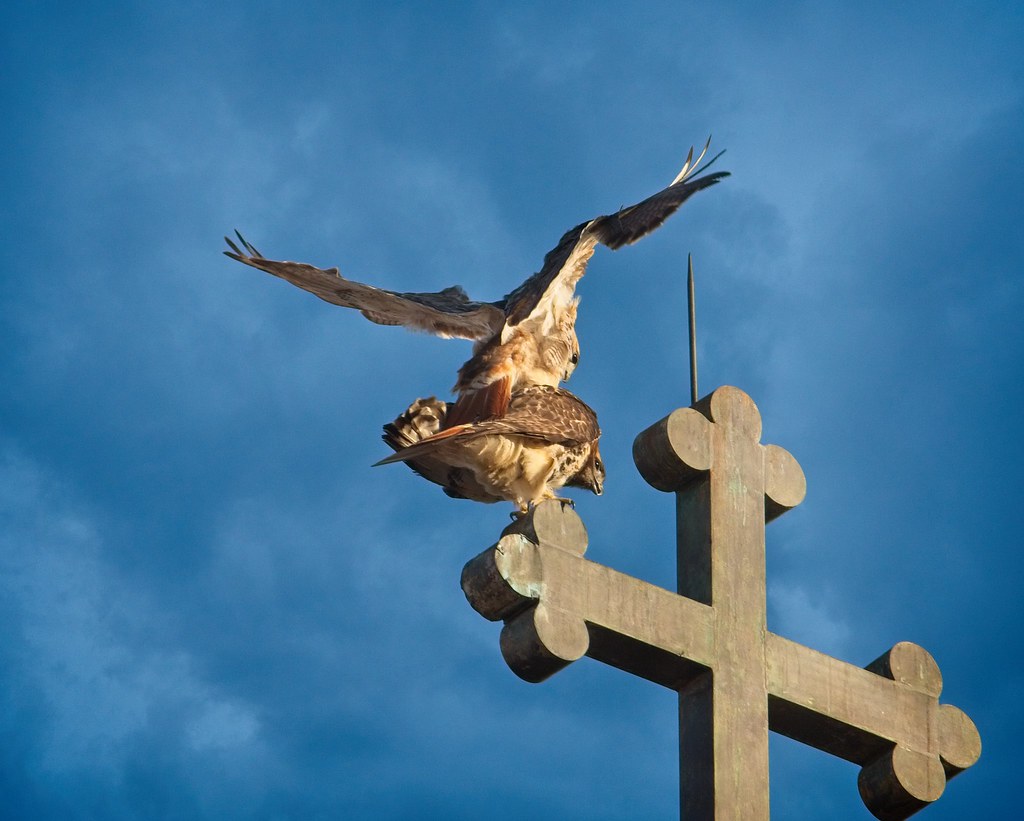 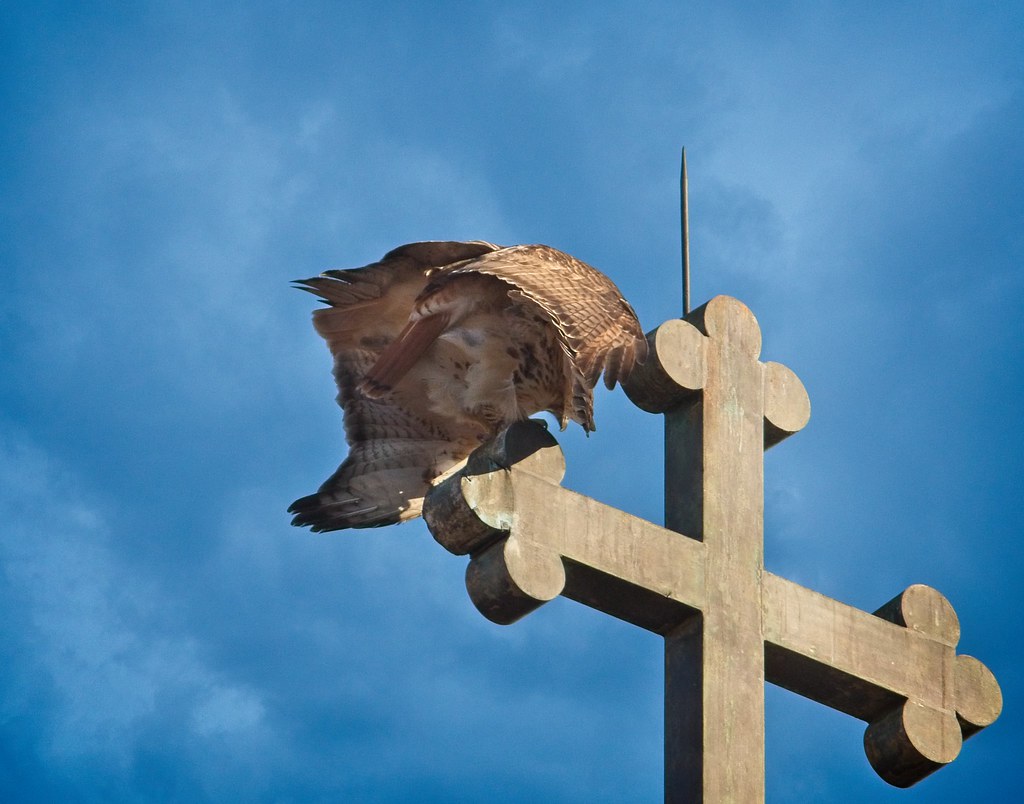 If this scene looks familiar, you may remember that Christo and Barucha/Nora made their first mating attempt in this same location in early February. 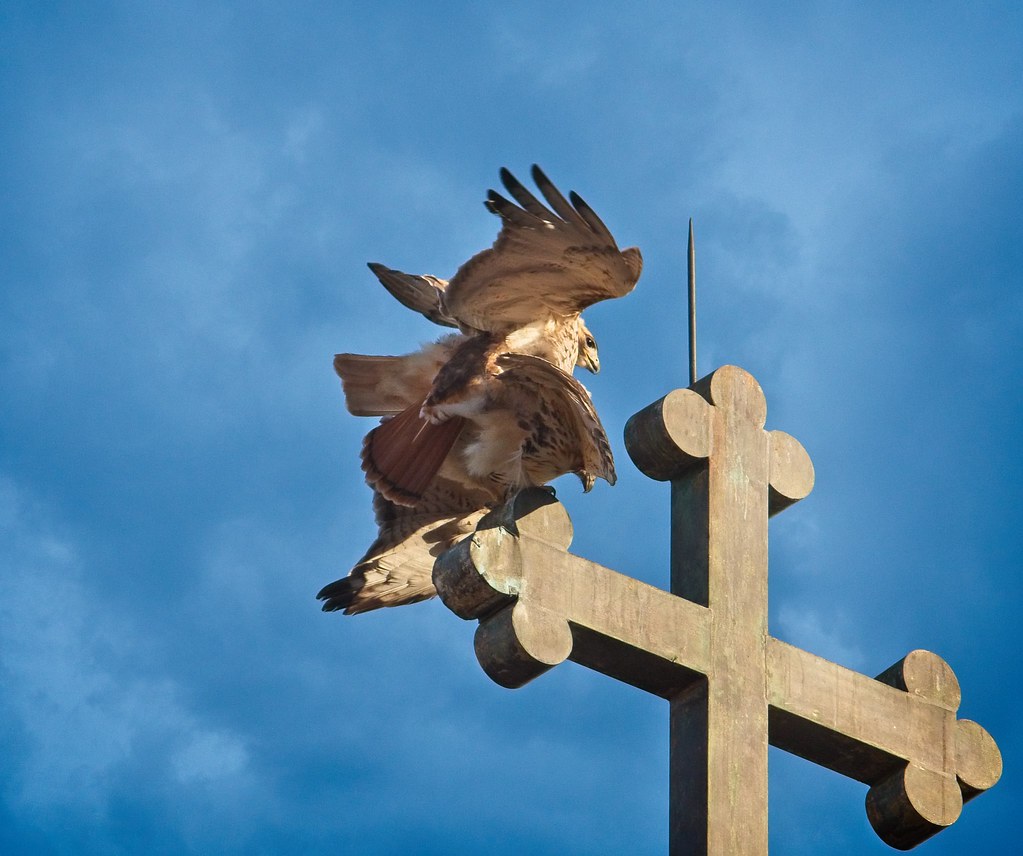 After mating, Christo left to go work on the nest and Dora rested a few minutes before taking off. 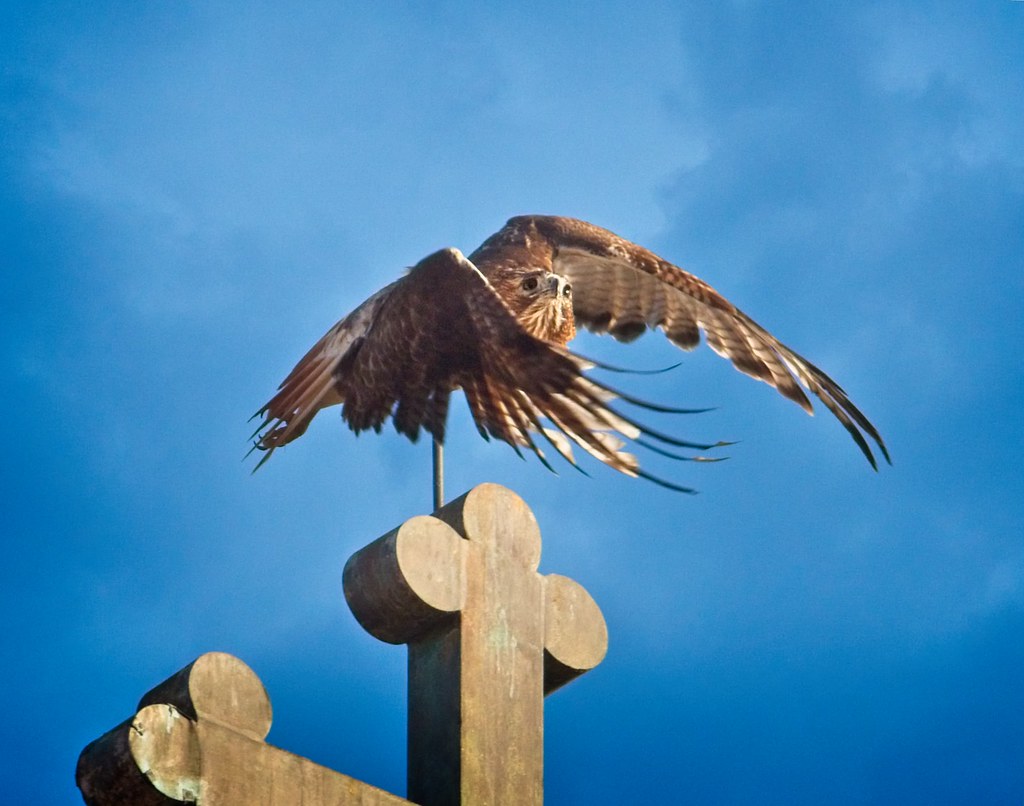 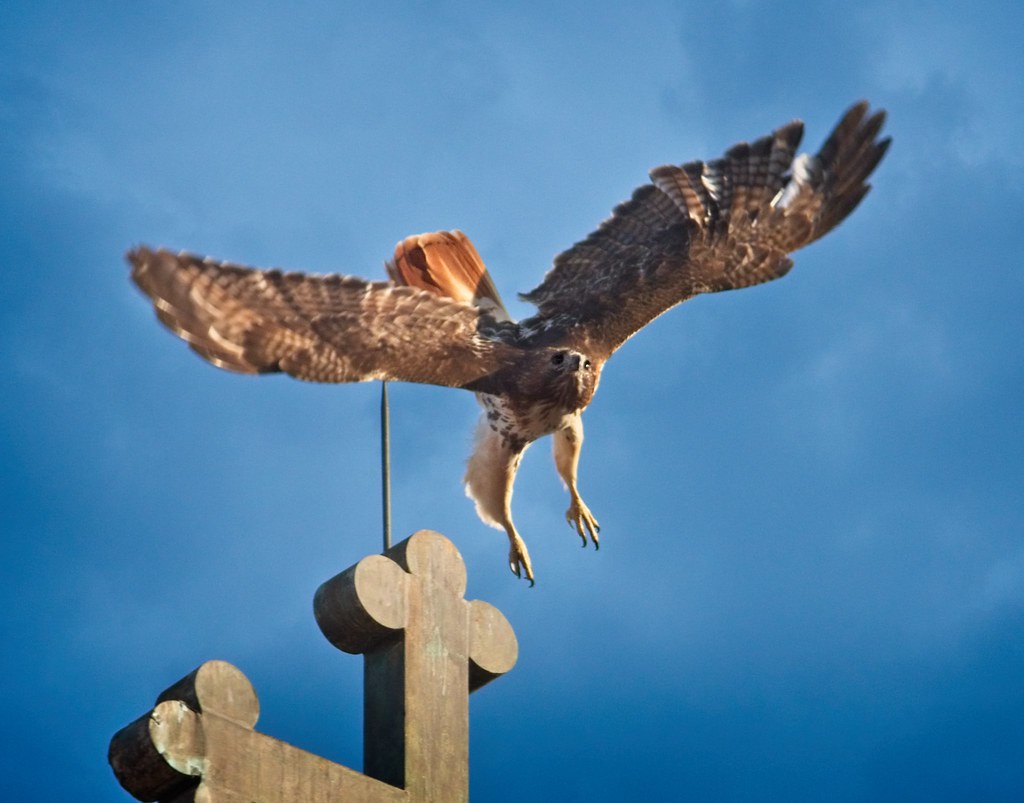 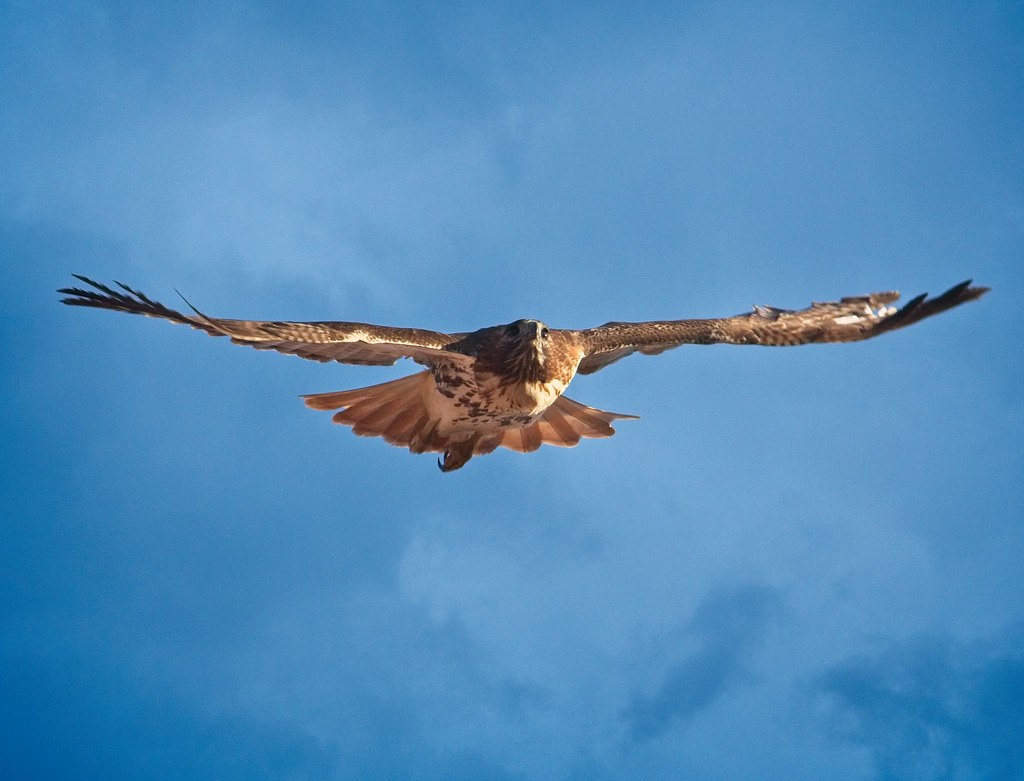 In addition to nest maintenance, Christo has been busy feeding both Dora and himself.  I watched him take a pigeon to Dora as she perched on a Village View building at First Avenue and 4th Street.  They shared the pigeon, but decided to fly all the way back to the park with the leftovers.  Below, Christo carries the remains to a tree where the two of them finished it off. 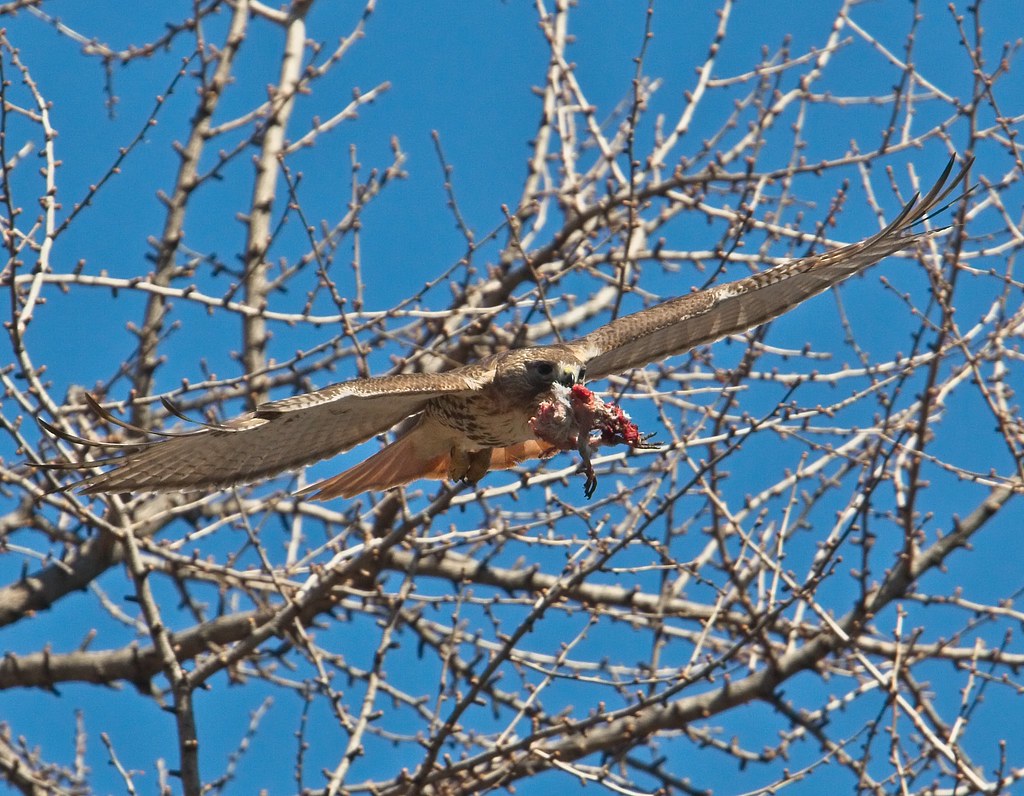 Not long after they ate the pigeon, Christo went hunting again within the park.  He posed nicely from atop a lamp post. 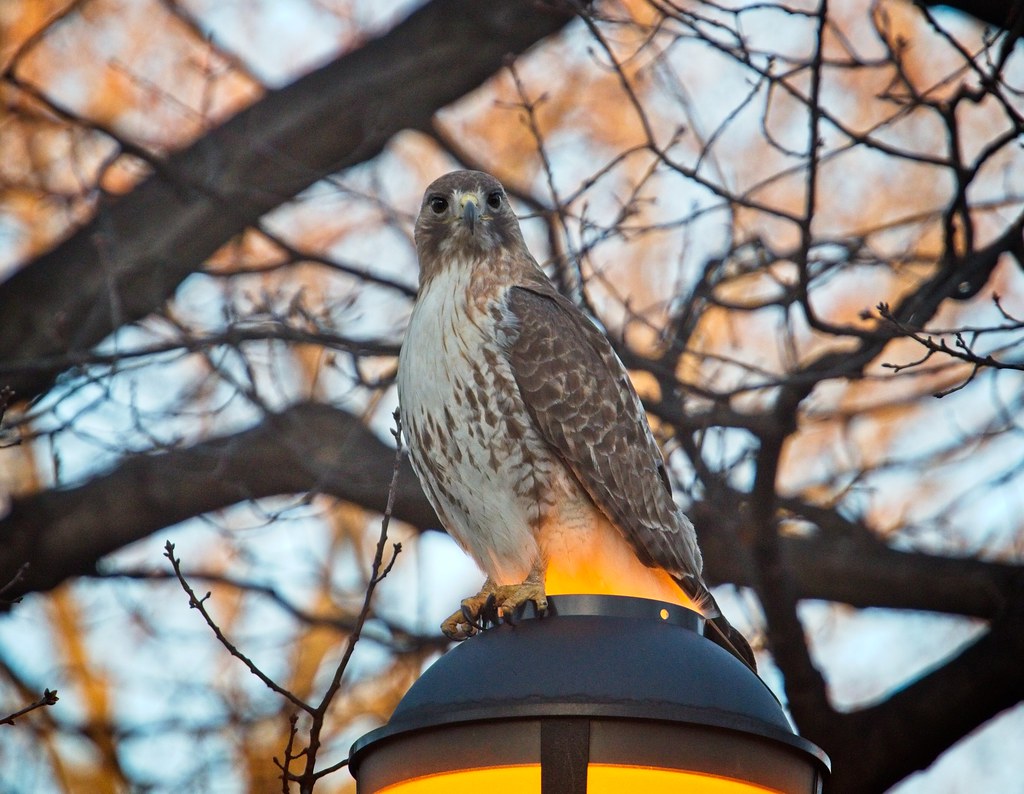 And then flew up to his favorite hunting lookout, the flag pole. 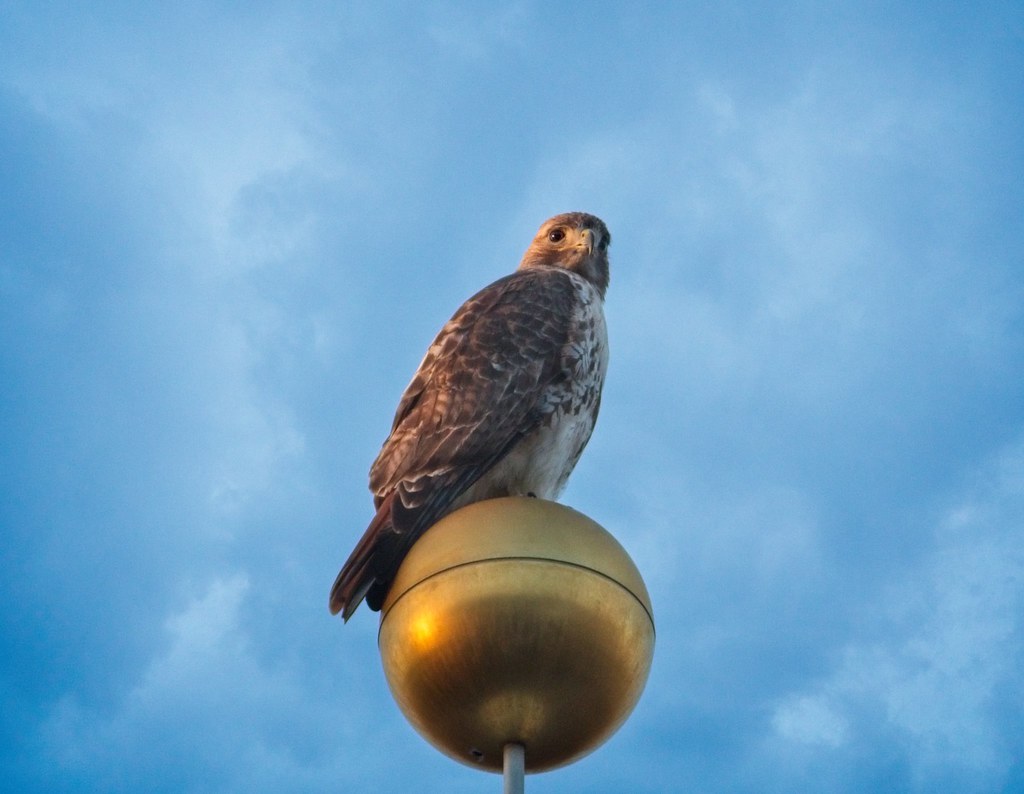 From there, he dove down to some bushes next to the men's room and quickly came up with a rat. 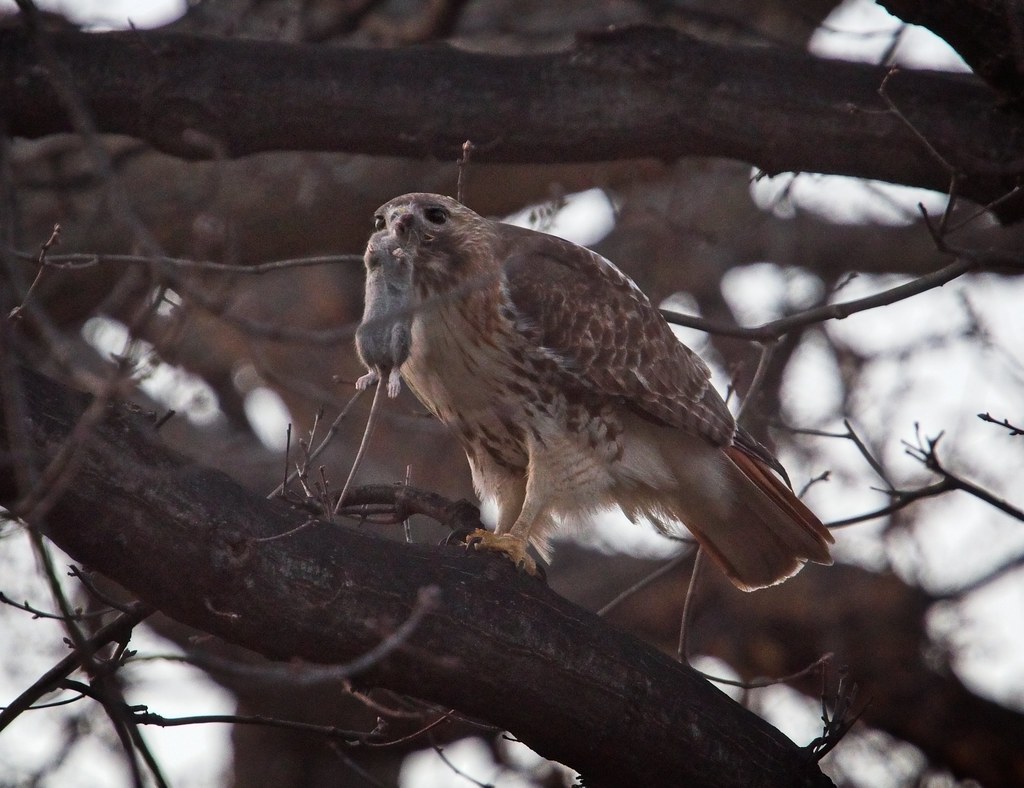 Dora and Christo together.  You can really see the difference in their size (she's bigger) and coloring. 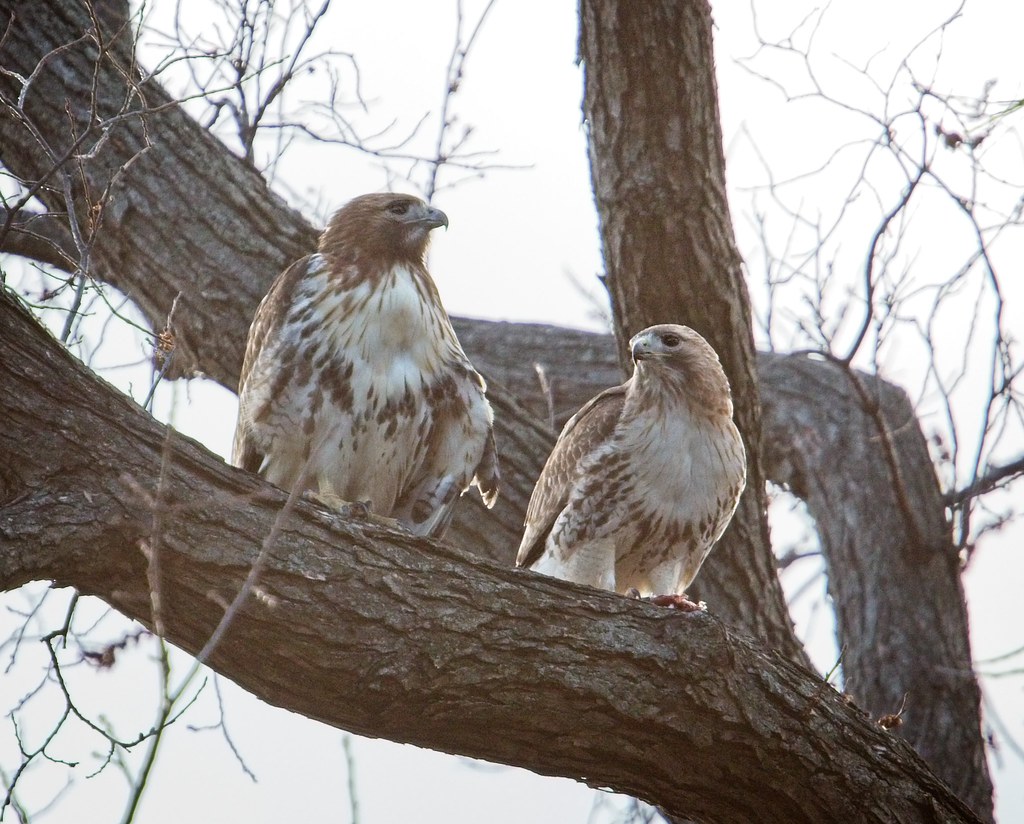 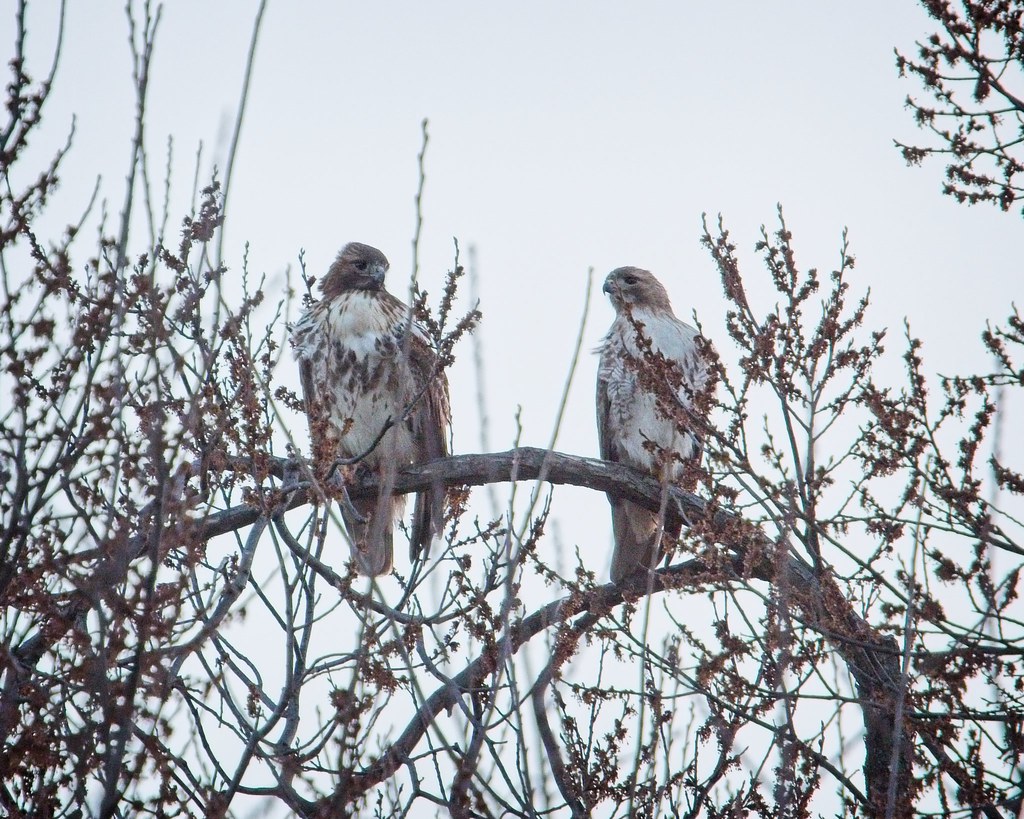 When the hawks perch on the Village View building on First Avenue, we can just barely see them from the park.  When the leaves grow in on the trees, we'll lose this vantage point. 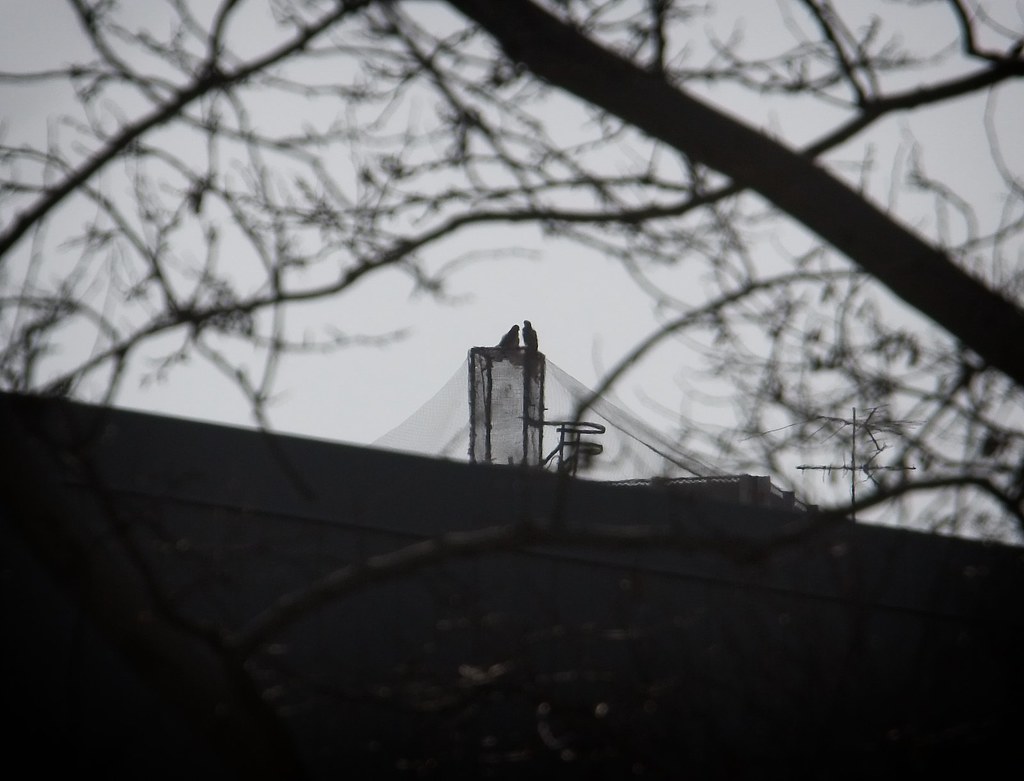 I'm still on the lookout for Barucha/Nora.  Today, around 3pm, I saw a red-tailed hawk soaring over Delancey and Essex, but it was too high and the sky too dark to make a positive identification. I want to believe it was Barucha, but I can't be sure.