Immature red-tail hangs out in Tompkins while Christo, Dora and Nora sort themselves out

I'm still catching up on all the hawk excitement of this last week.  After Dora's return to Tompkins Square on Monday, there hasn't been any conflict between the three adult hawks.  Christo and Dora have been working on the ginkgo nest together each morning and I suspect Christo is leaving food for Dora in the nest.  No one has seen her hunt yet, but she seems to be eating, so I think he is taking care of her although I haven't actually caught Christo making a food delivery.

Nora has not been seen since Tuesday, but I'm sure she's still over in the Avenue D area.  Christo is still shuttling back and forth between Avenue D and the park, so he's worked out a schedule for managing his time.  When I left the park tonight, Dora was in the ginkgo nest and Christo was in a tree in the park near Avenue B and 7th Street.

Meanwhile, as the three adult hawks have been the focus of all the attention, an immature red-tail has been camped out in the park.  It showed up Tuesday afternoon and has spent at least two days in Tompkins under the noses (or, beaks) of Christo and Dora.  In the below photo, you can tell it's an immature hawk by its yellow eyes. 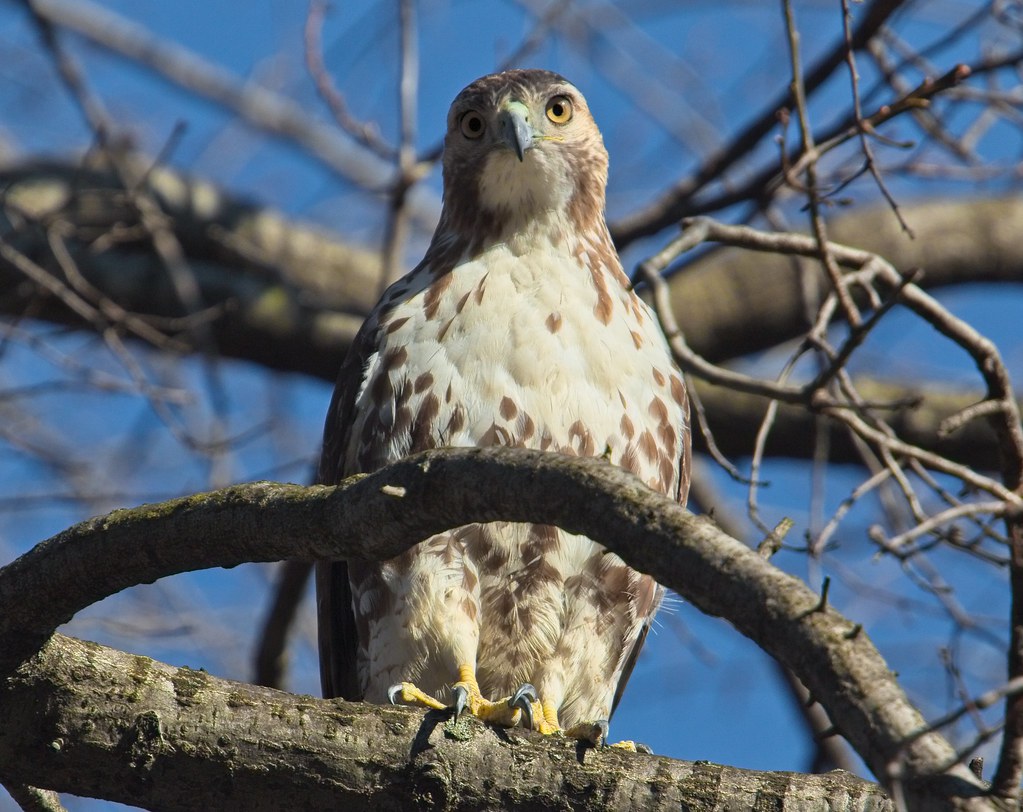 As all three adult hawks were out of the park Tuesday afternoon, this young one flew around and spent at least a couple of hours attempting to catch a rat near the ginkgo nest. 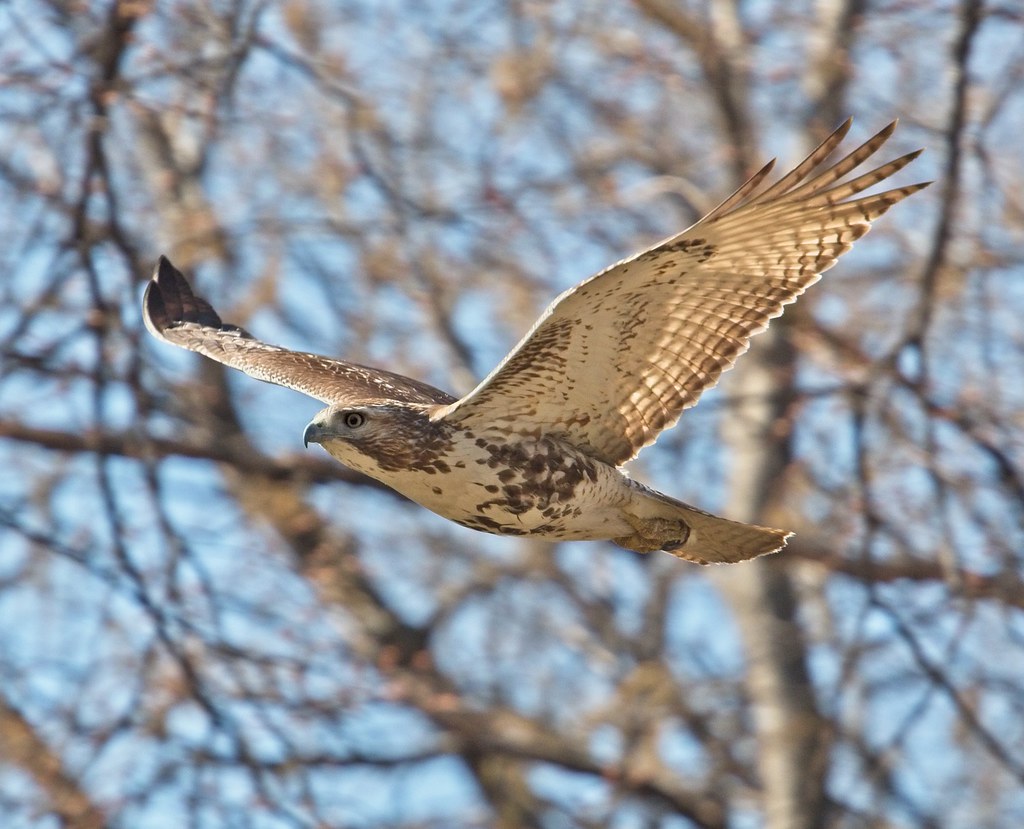 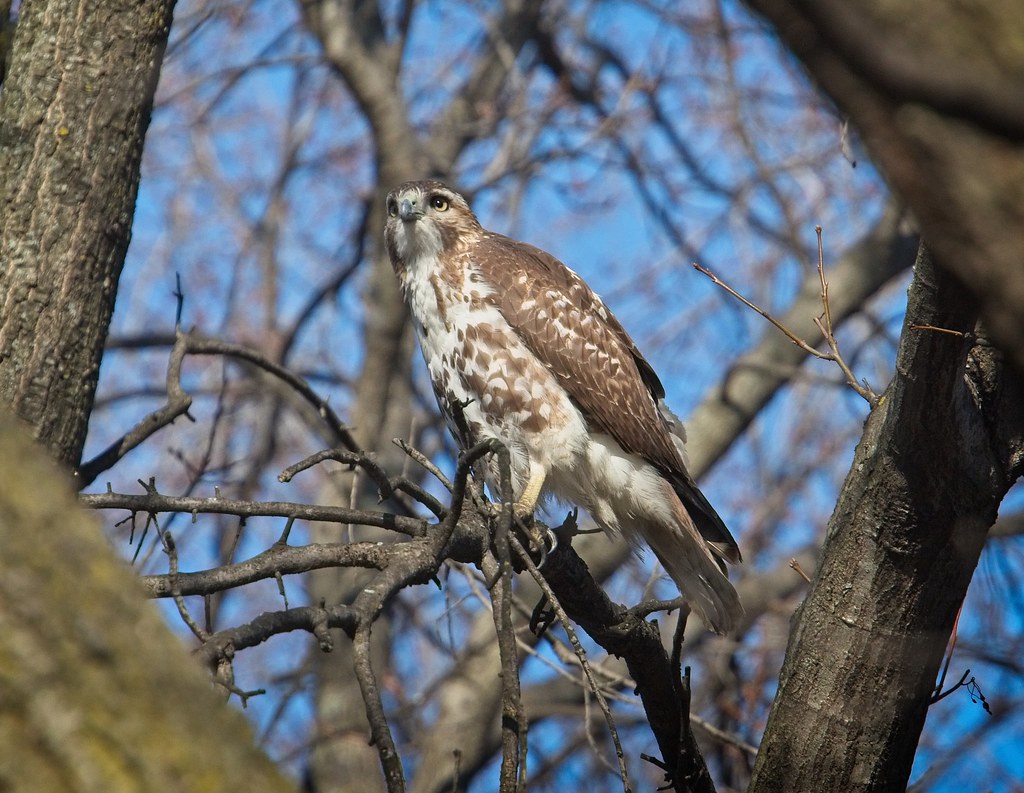 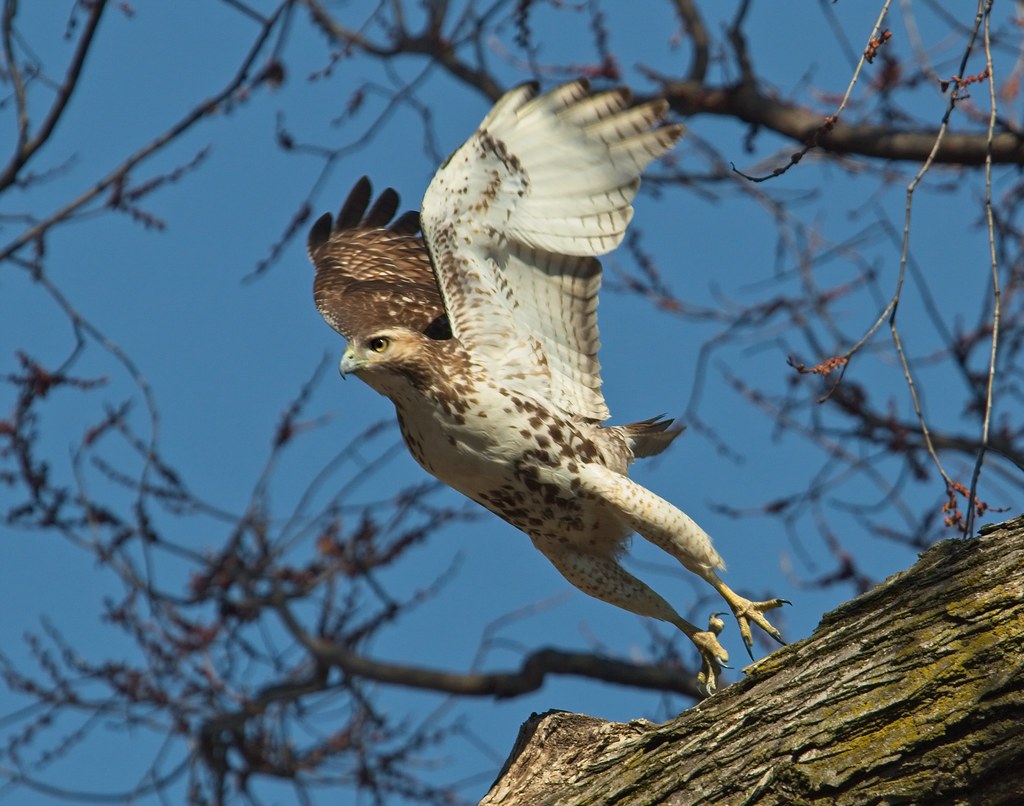 Finally, it made one last dive... 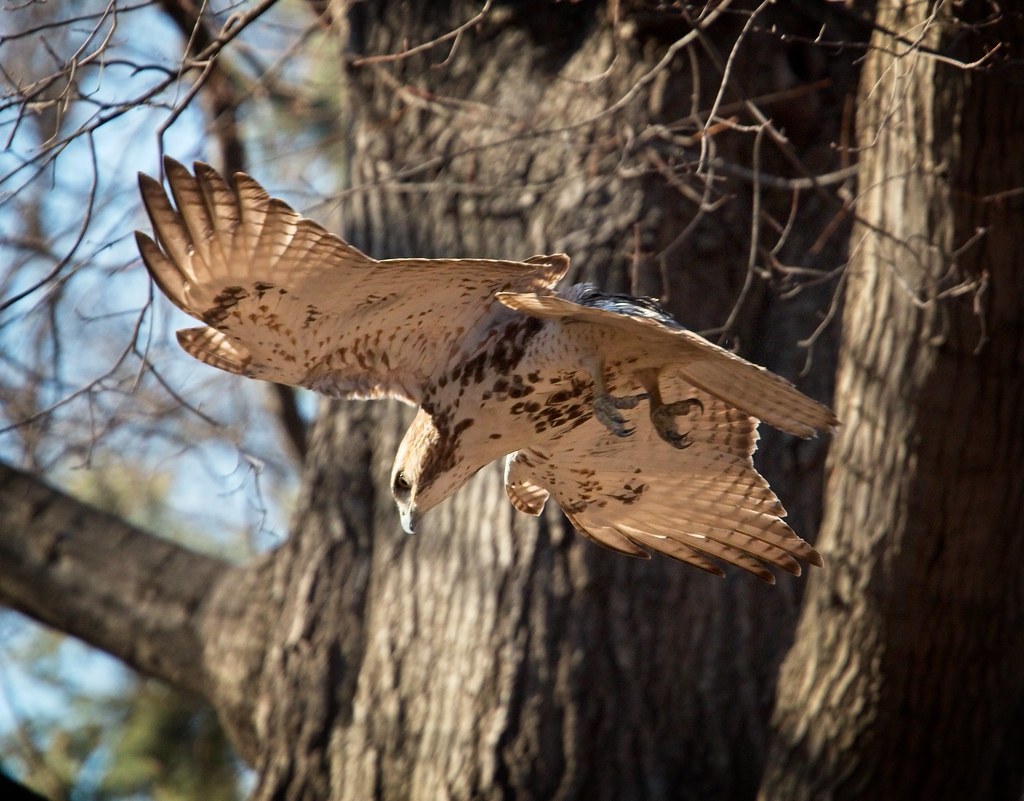 ...and nabbed the prize. 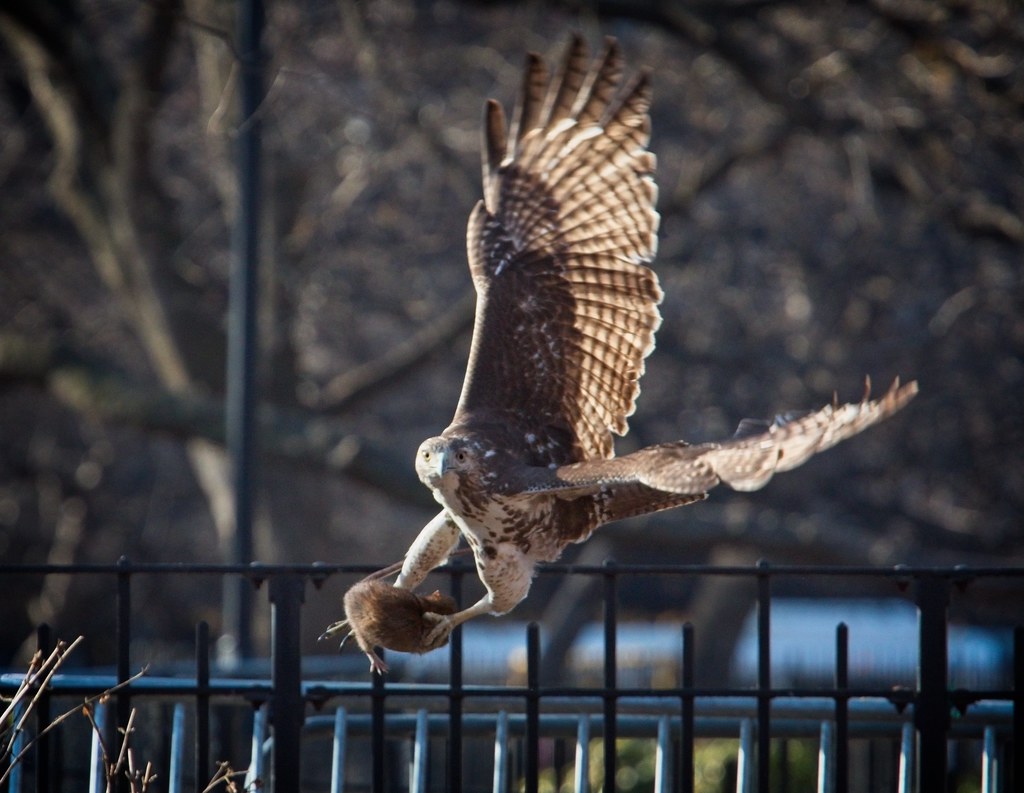 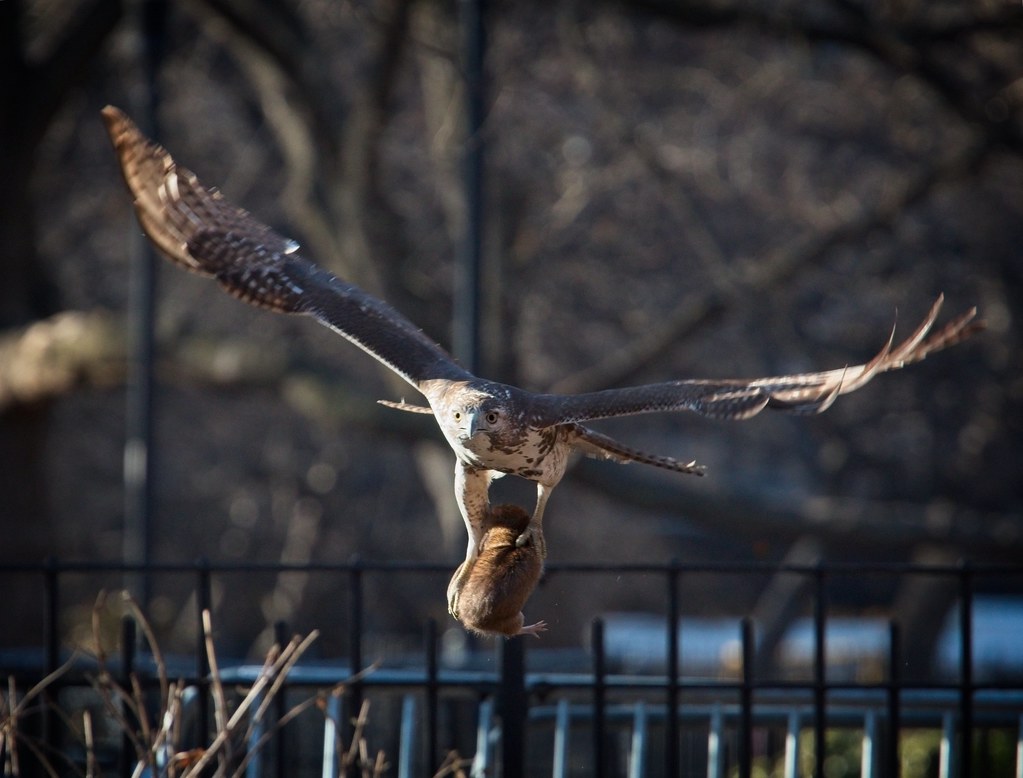 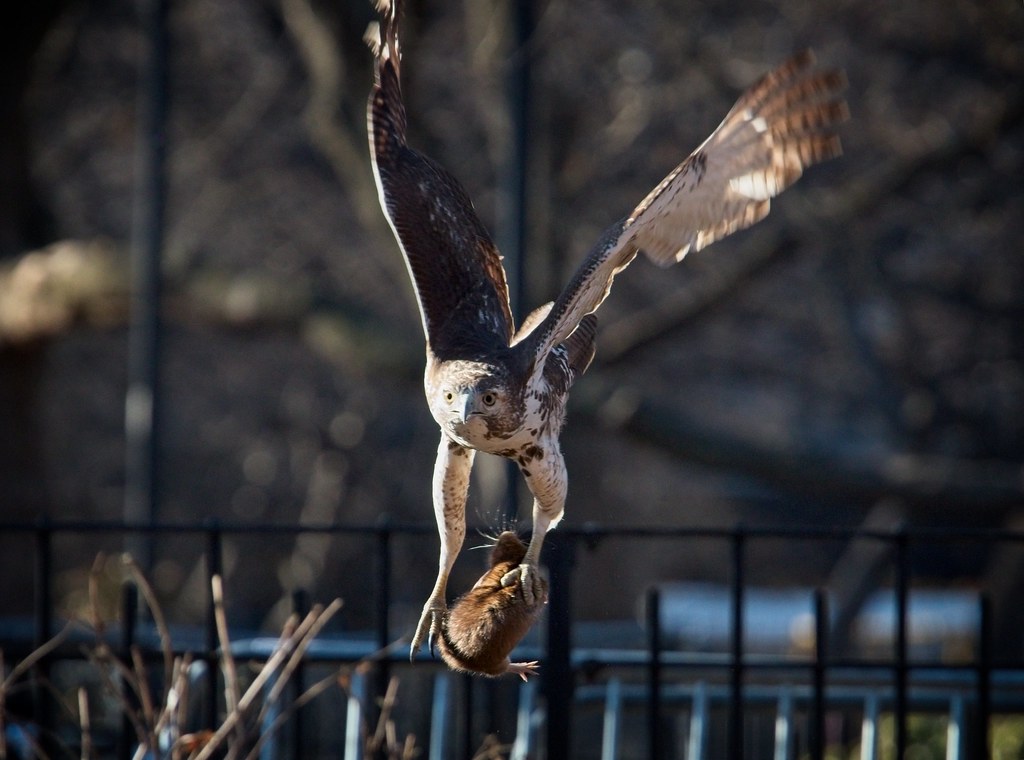 The hawk perched with its rat right next to the Avenue B playground, where all the children screamed with delight. 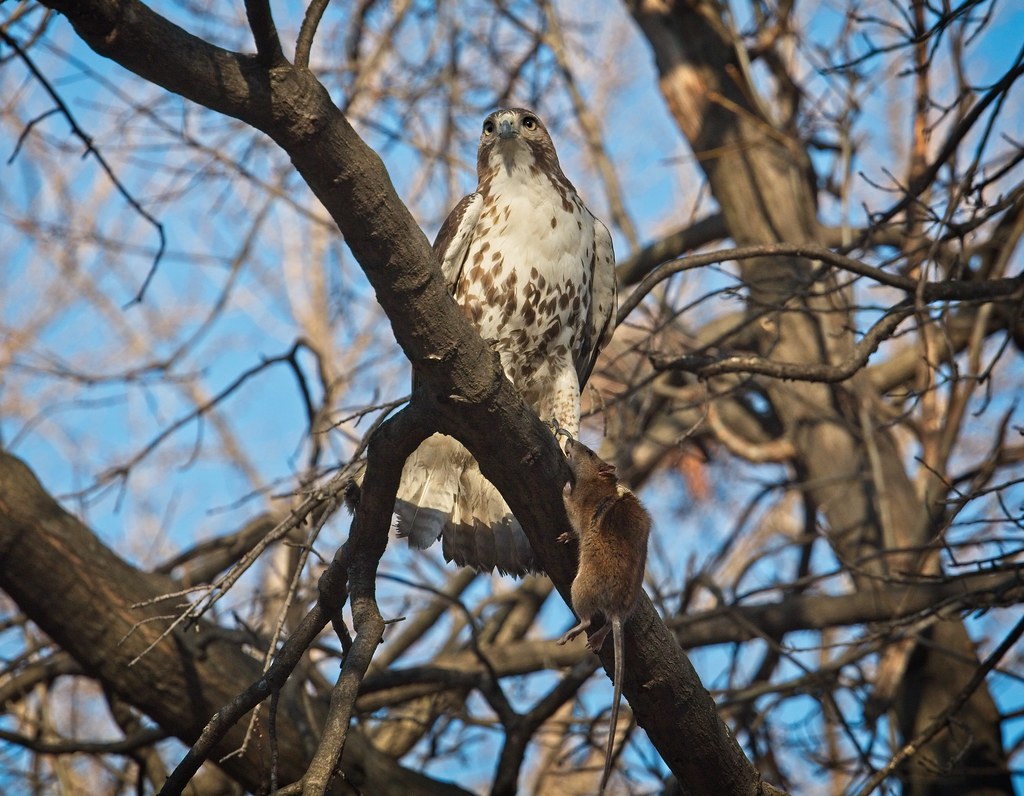 Then it flew its meal to a bigger tree on the east side of the park where it spent the remainder of the day eating, then eventually going to roost. 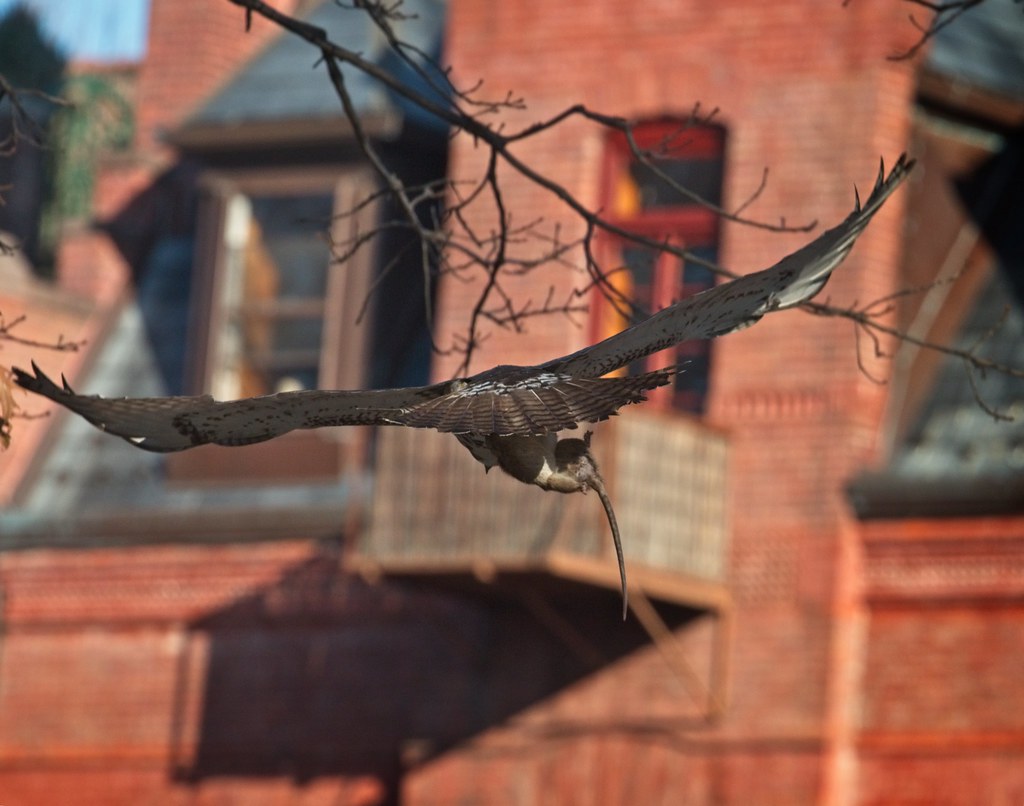 Normally, Dora would not let any other hawk, especially another red-tail, into her territory let alone the park.  I kept waiting for her to appear and chase the young hawk off and steal its food, but she never did.  I think she's still resting up and getting her strength back.

Where was Christo when this was happening?  He was on top of the Christodora, of course, supervising the construction on the roof.

Is that knot tied correctly? 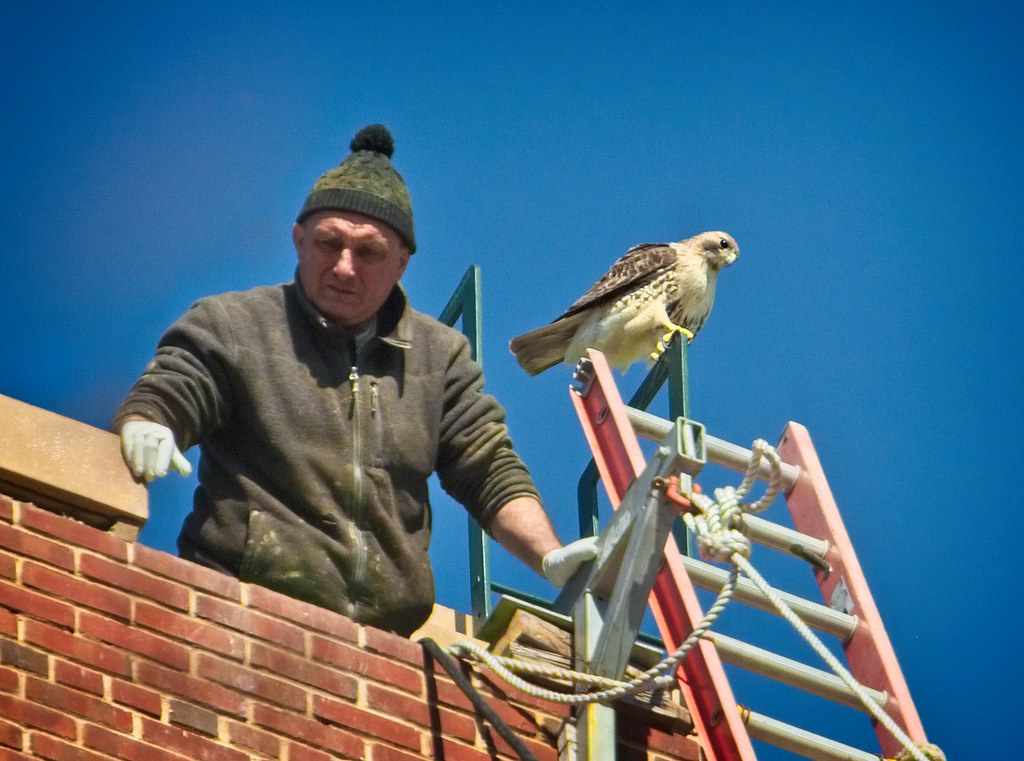 I thought Christo might chase off the young hawk and steal its food, but he never did.  Instead, he caught his own rat, ate some of it, then flew around with the rest calling for either/both Dora/Nora to come get it, but no one ever responded. 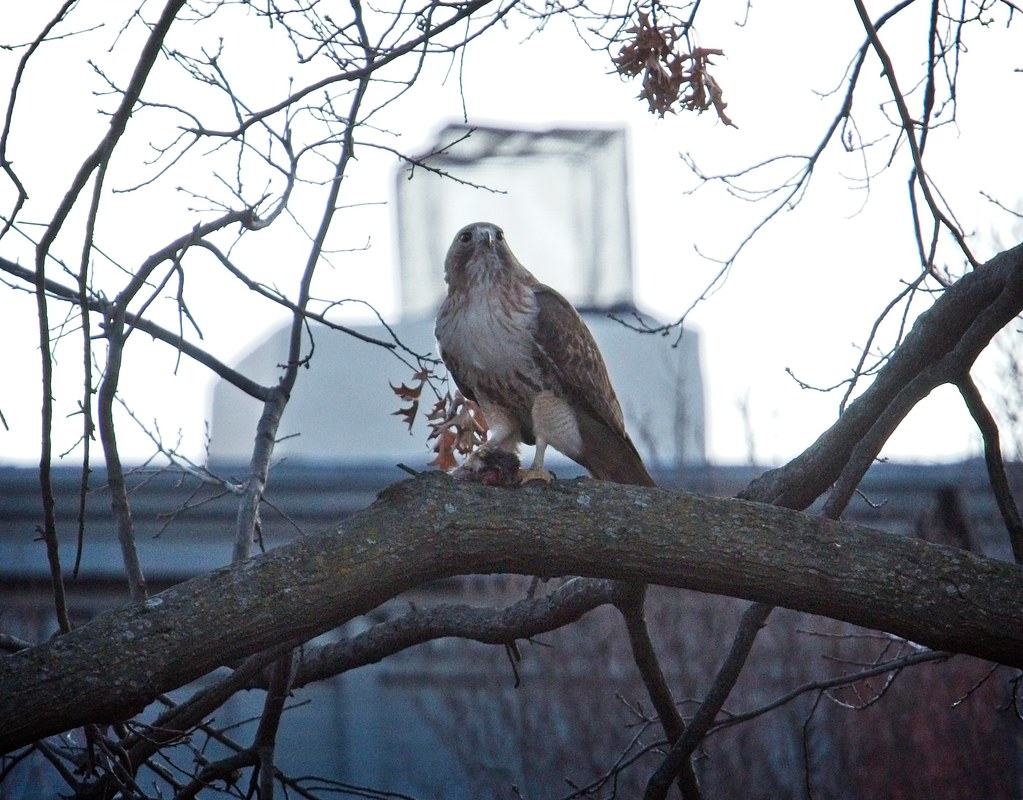 Christo ended up taking the rat to the cross at Most Holy Redeemer church on 3rd Street and ate it, then returned to the park where he went to roost in a tree not far away from the immature hawk.

The immature hawk also spent the following day in the park, catching and eating a pigeon behind the park offices. It perched in a tree over the eastern birdbath and didn't move for hours.  At the time, Dora was on a cellphone repeater on Avenue A and never showed any concern for the young intruder.  There is currently enough food to go around, so everyone is well-fed and content.