We're a week into January, and red-tails Christo and Dora are doing well.  They've been defending their territory against other raptors, and have been keeping watch over the nest they inexplicably built in October.  We're nearing the time when nest-building should start, so it will be interesting to see if the hawks decide to use their new creation.

When I entered the park on Saturday, I found Christo perched above the nest in the ginkgo tree near the Avenue B & 8th Street entrance. 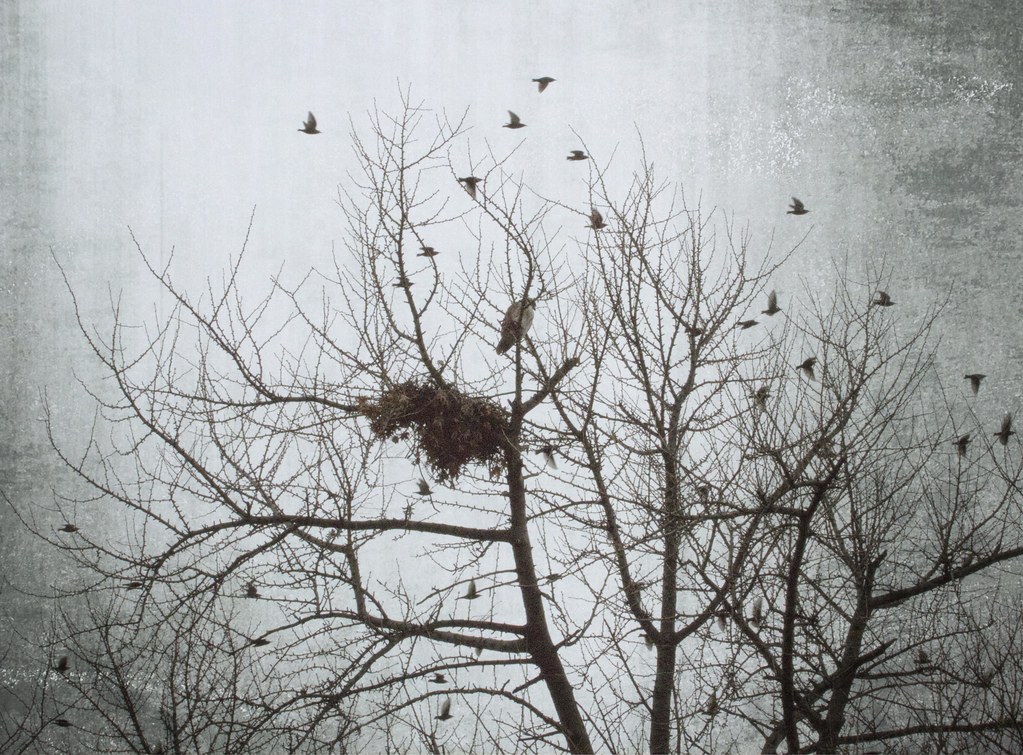 Dora was nearby in some trees along Avenue B. 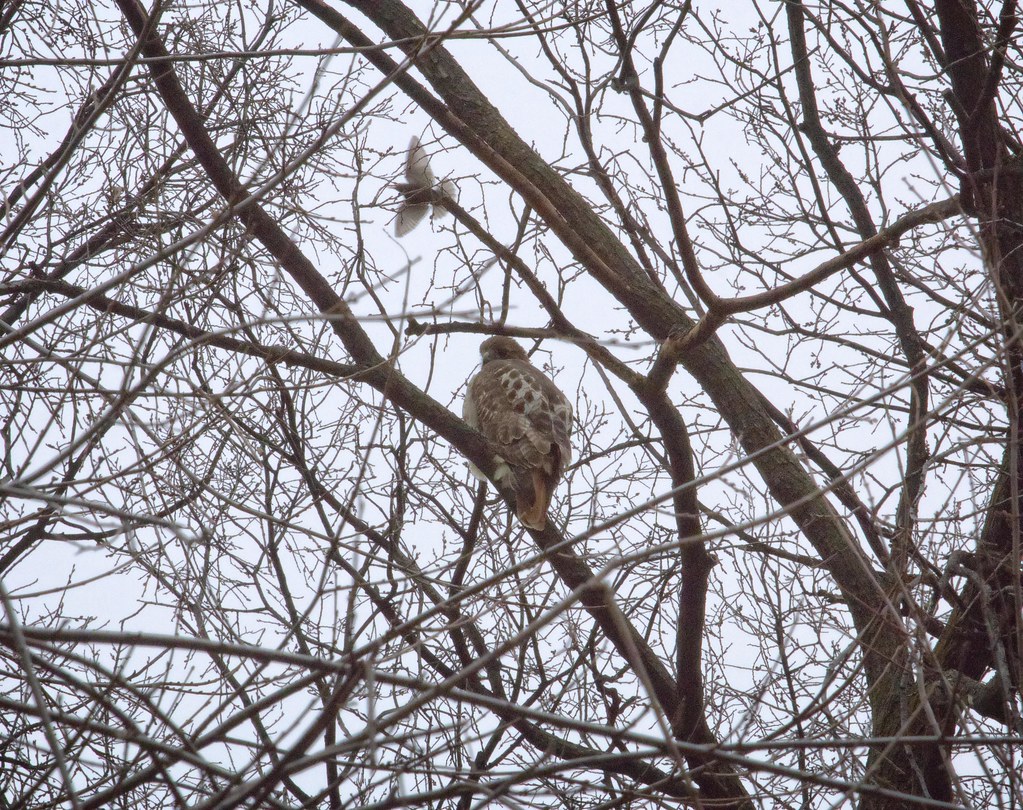 After a few minutes, they both flew to the west side of the park and perched in the sycamore at the St Mark's park entrance. 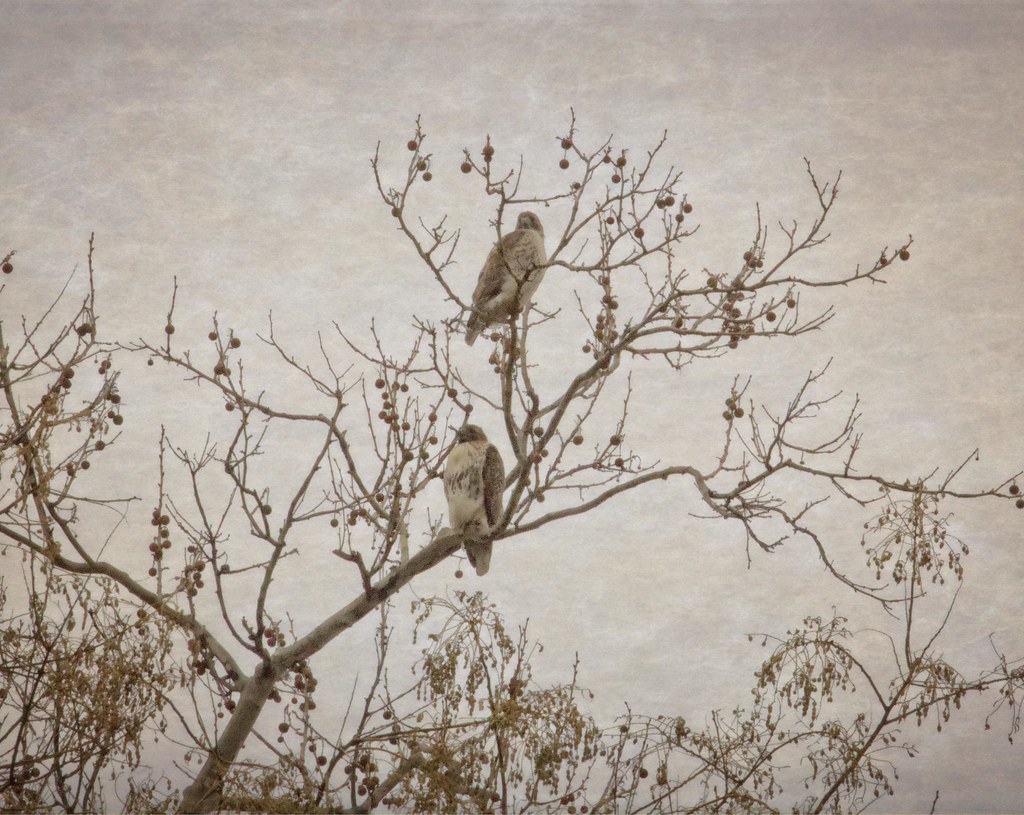 Christo flew off, leaving Dora to be entertained by starlings. 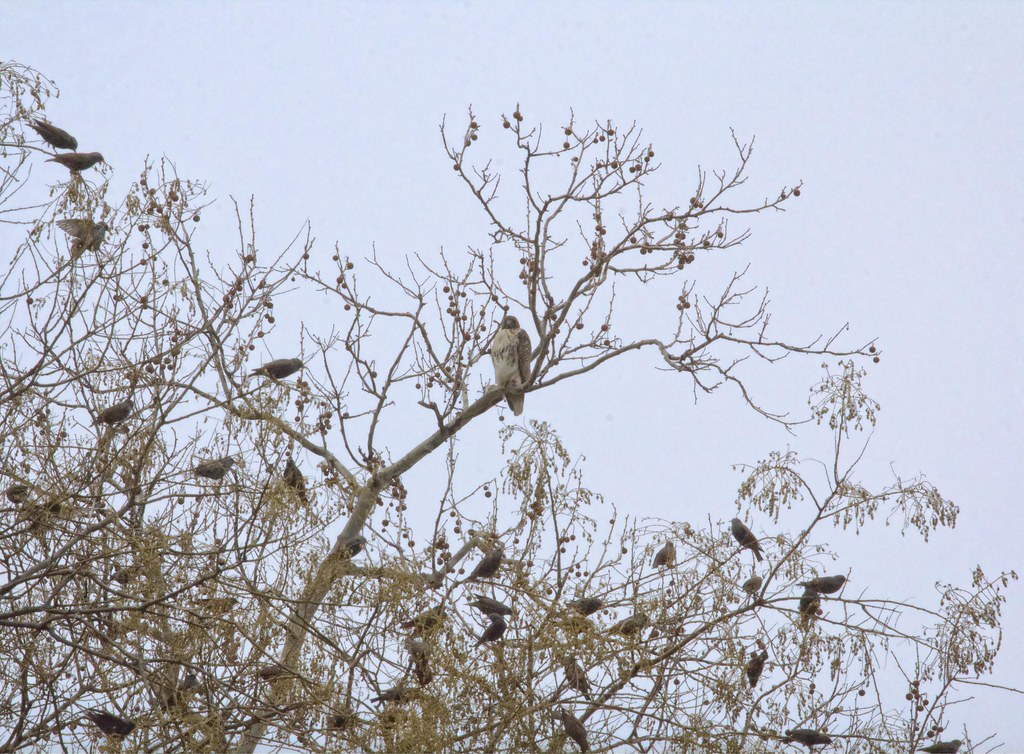 During this time, while both hawks were in the park, a peregrine falcon was perched atop the cross at Most Holy Redeemer on E 3rd Street.  This has been a favorite hangout for the hawks, and it's right in the middle of their territory, so I was surprised the hawks didn't chase it away.

Late in the day, Christo went hunting for dinner.  He had his eye on one particular area near the Avenue A playground and spent about an hour intensely watching the rodents in the underbrush. 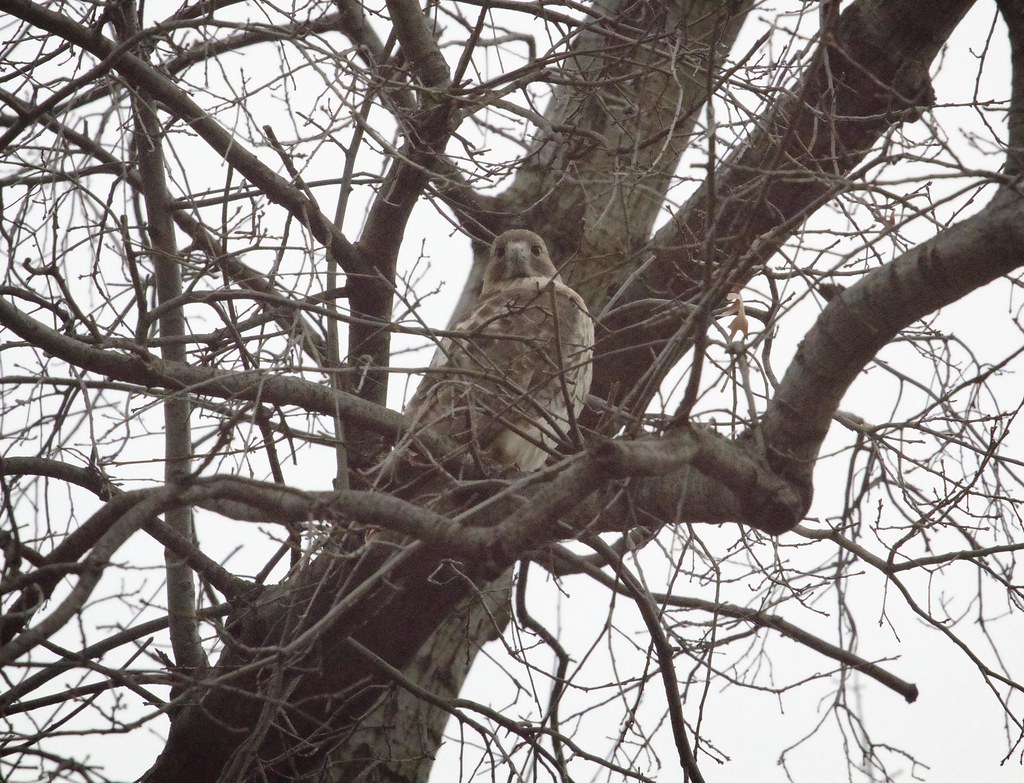 Just as it was getting too dark for my camera, he made his move. 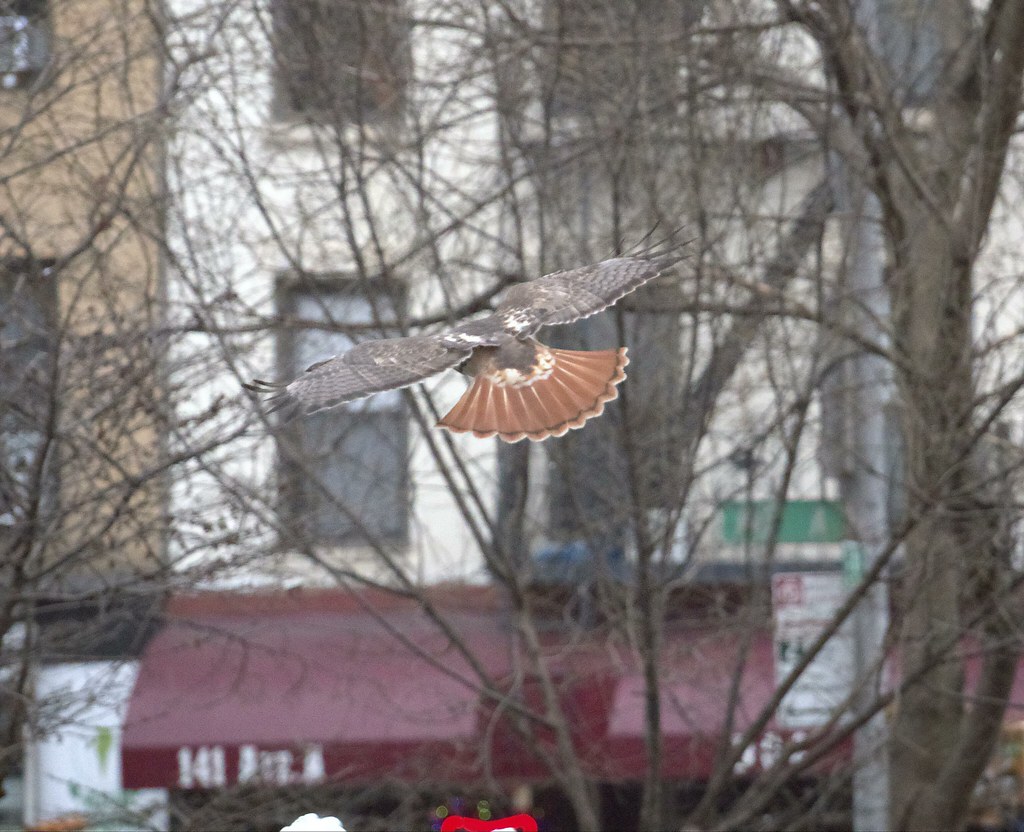 He dove head-first into the bushes... 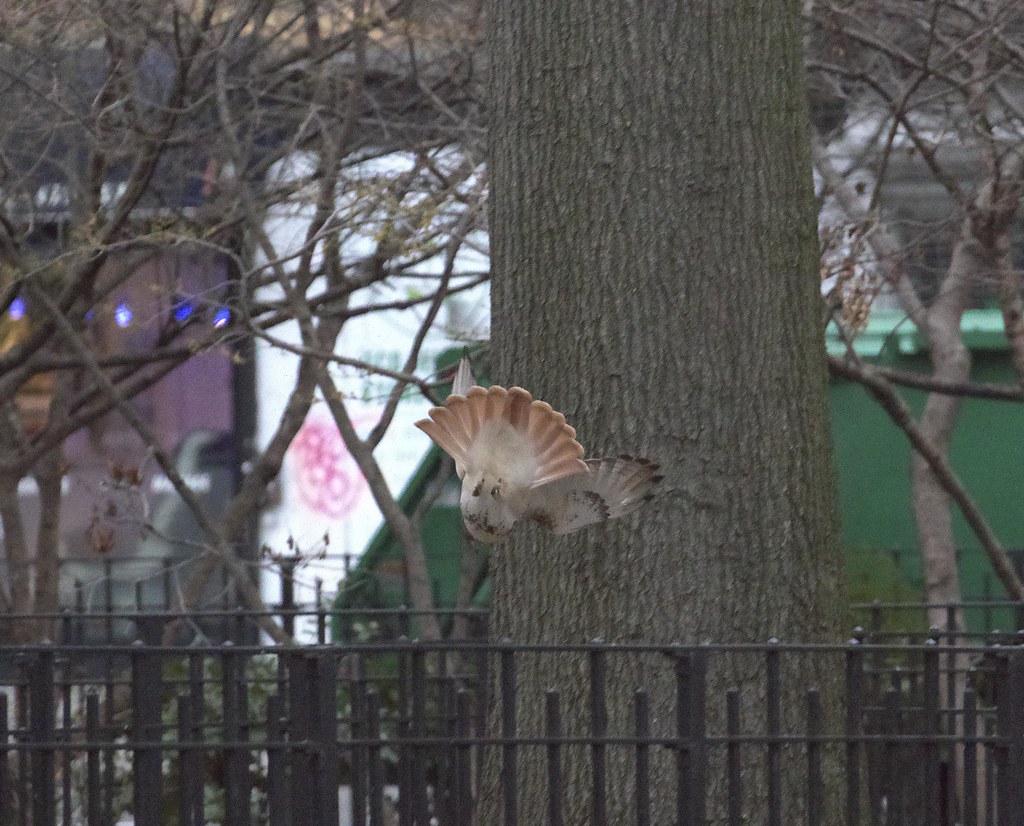 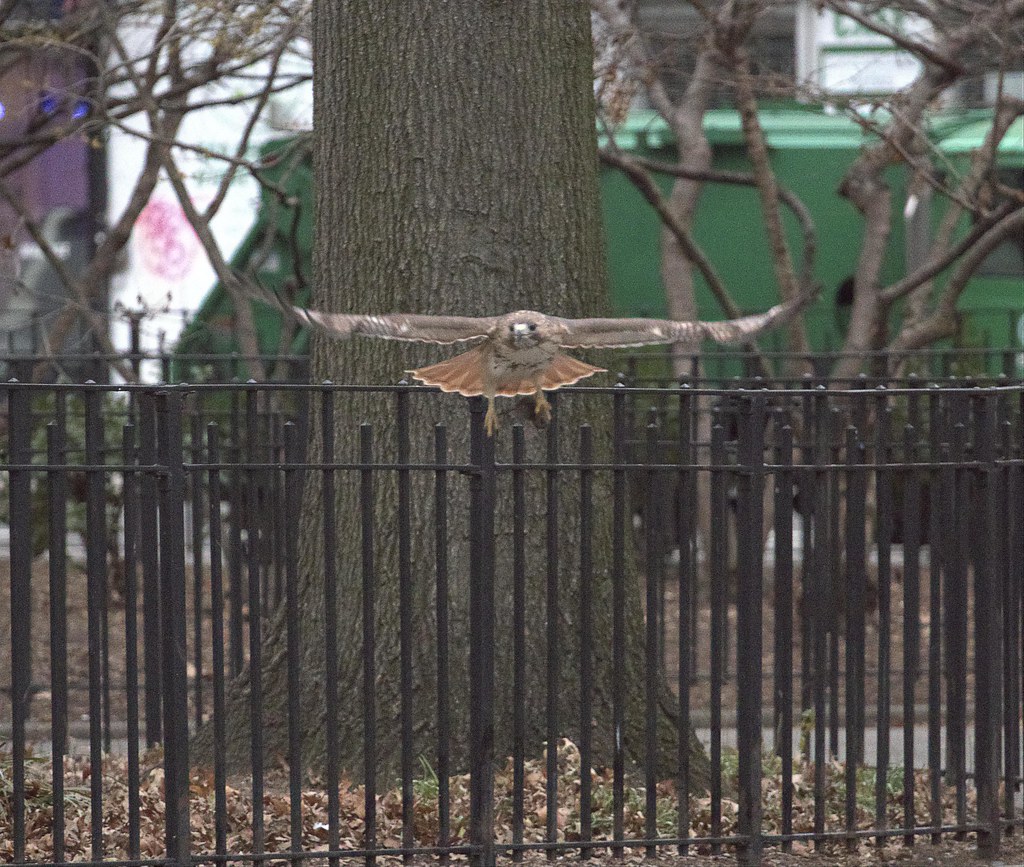 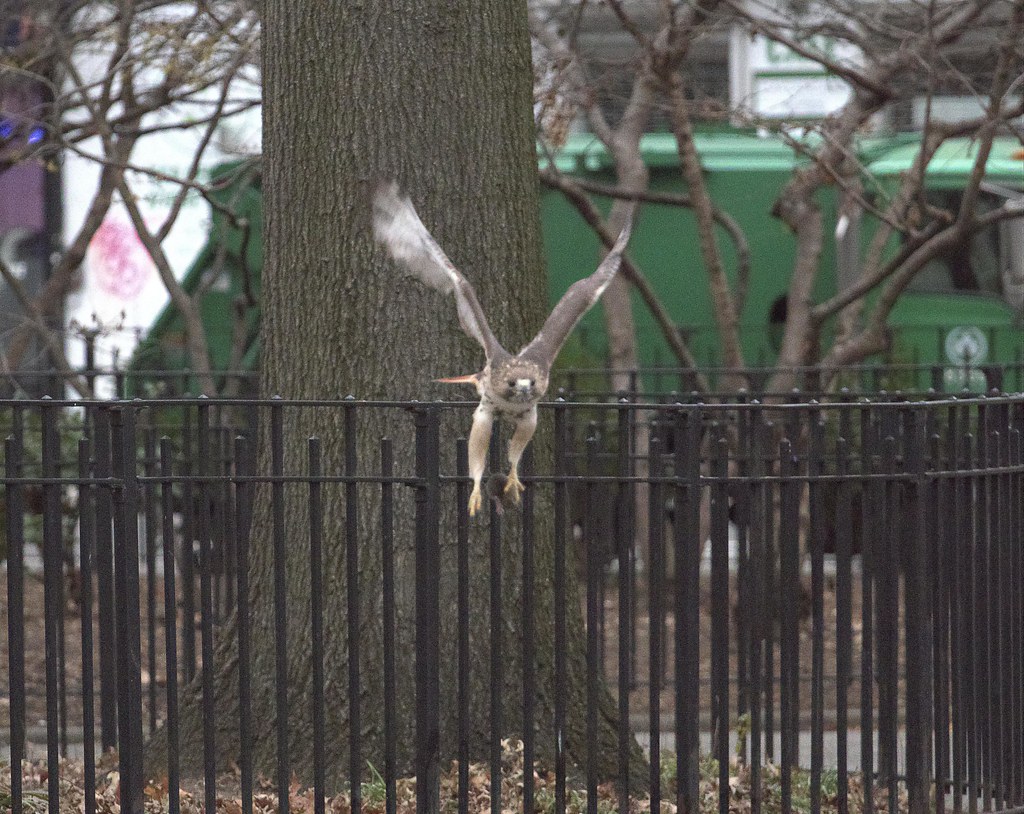 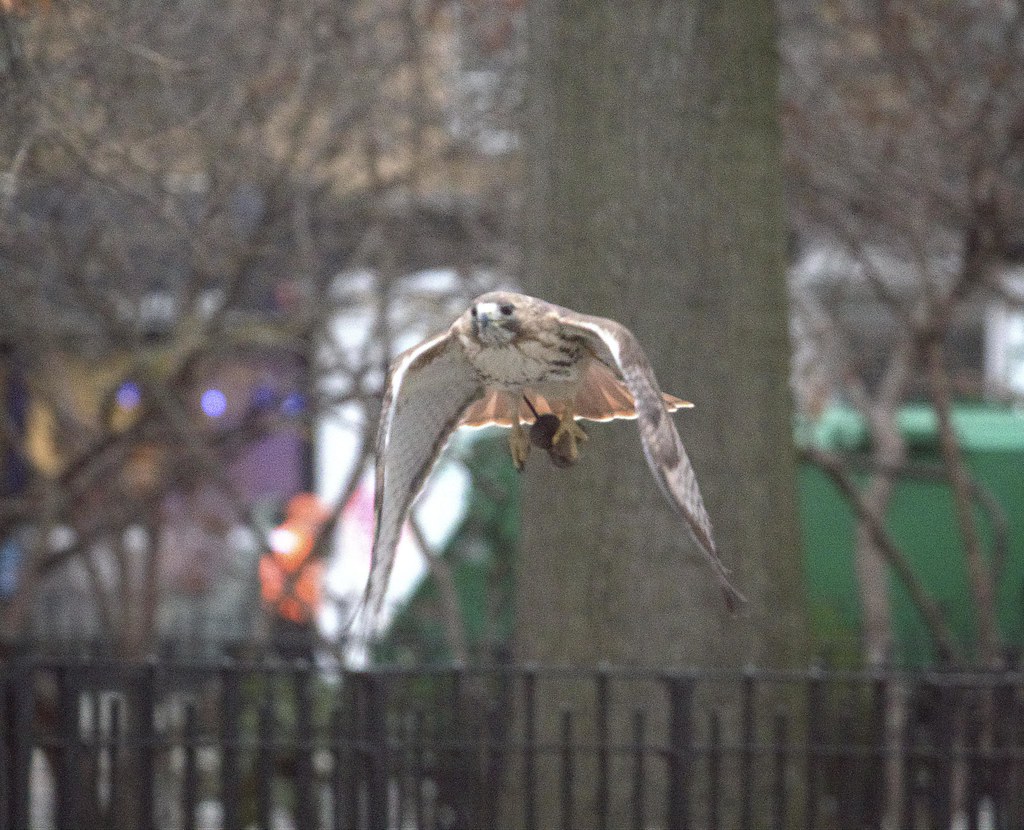 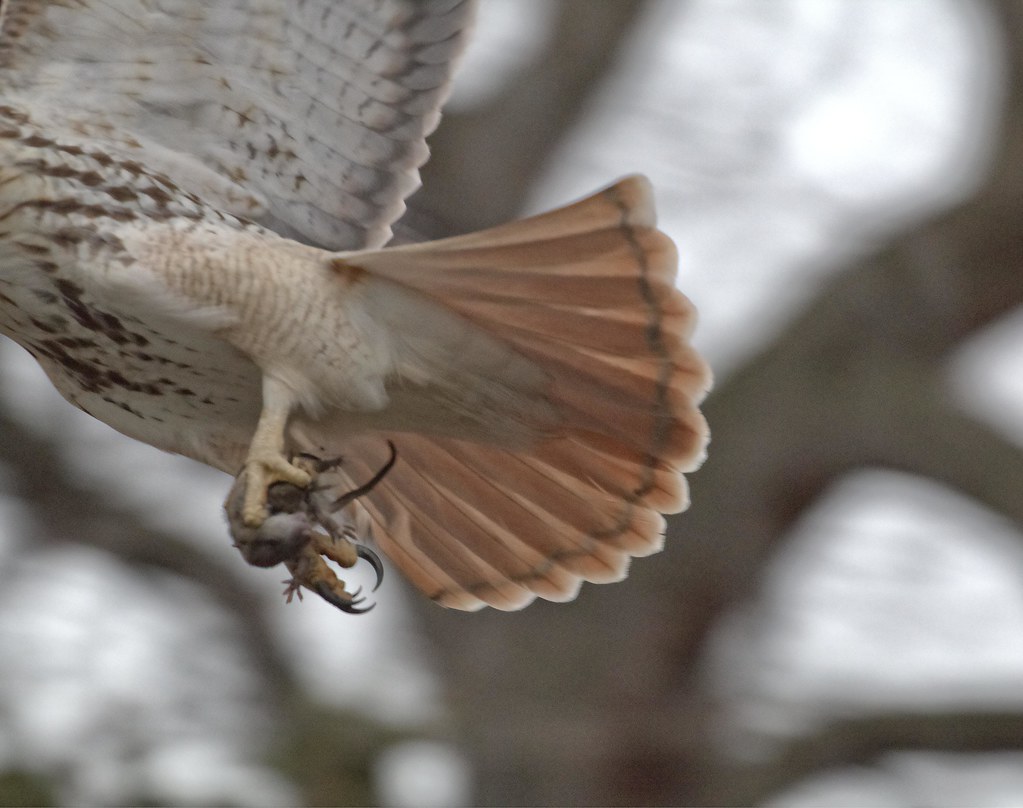 After eating the mouse in about three gulps, Christo flew to the trees behind the park offices, where he appeared to be hunting again.  The gates to the back area were locked, so I couldn't get back there to see if he caught a second course.

On Sunday, both hawks were hanging around the nest site again, and I watched Christo fly around for a while. 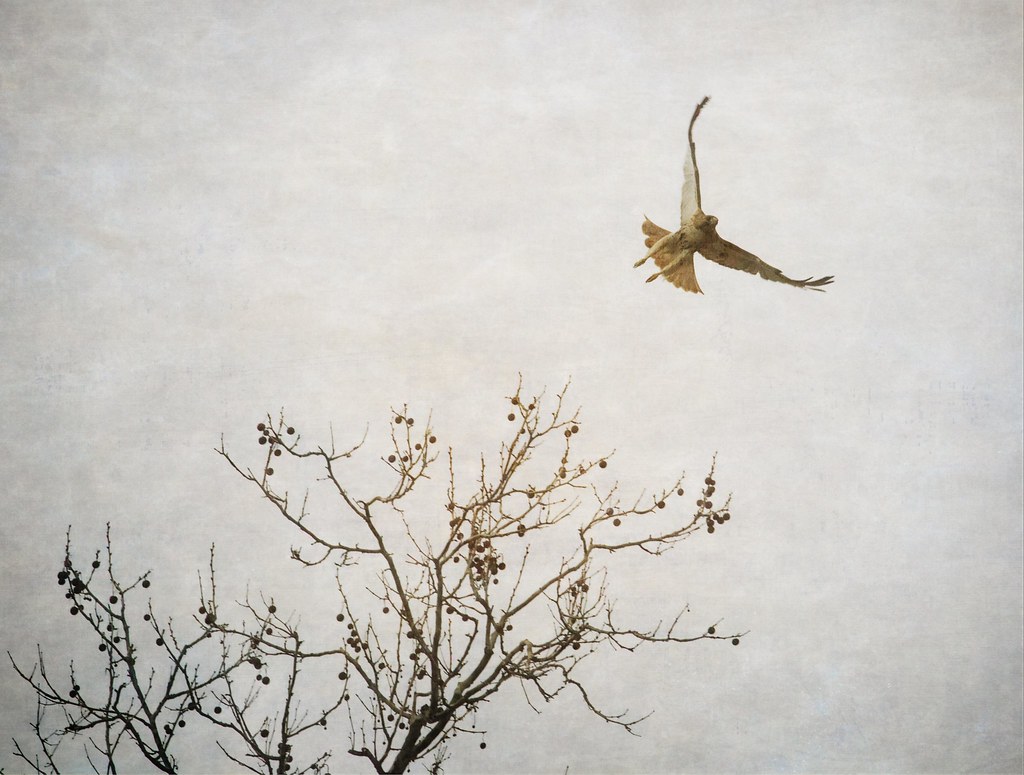 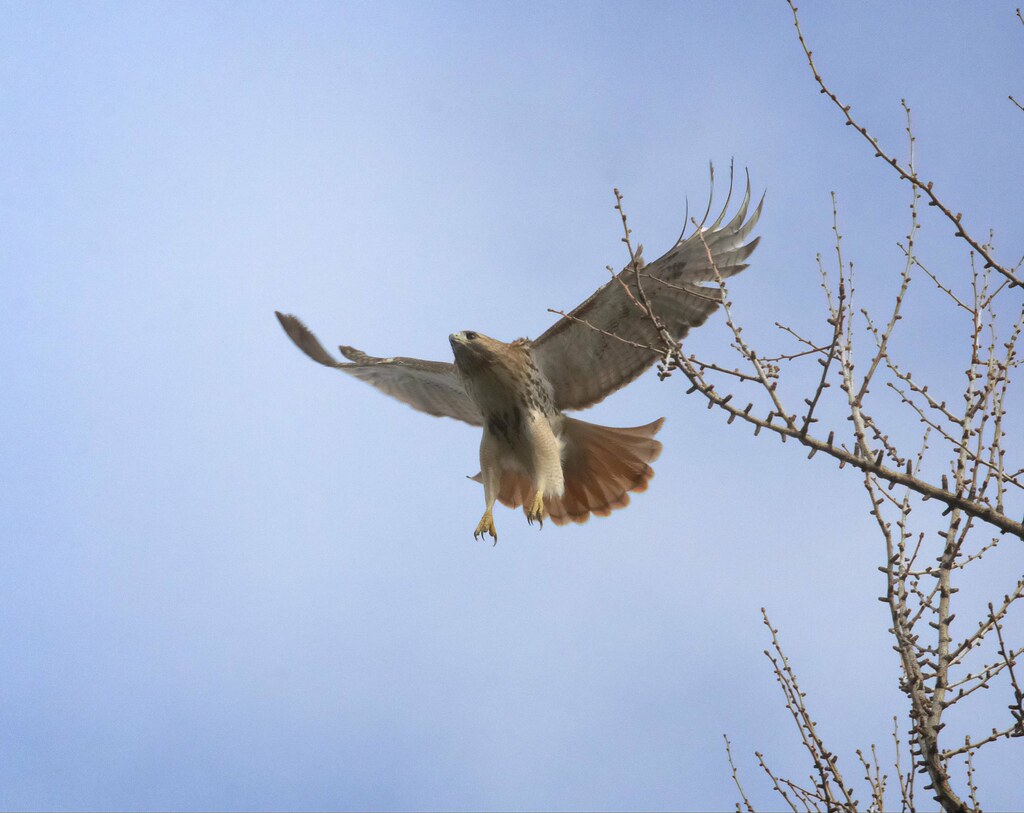 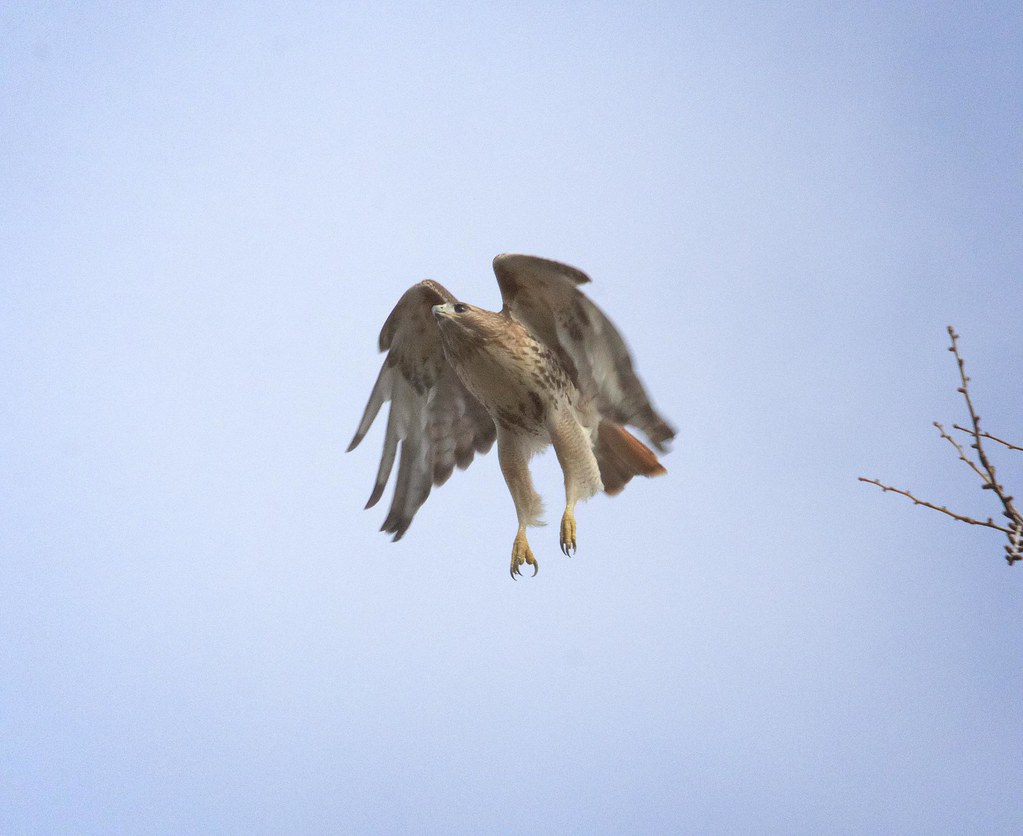 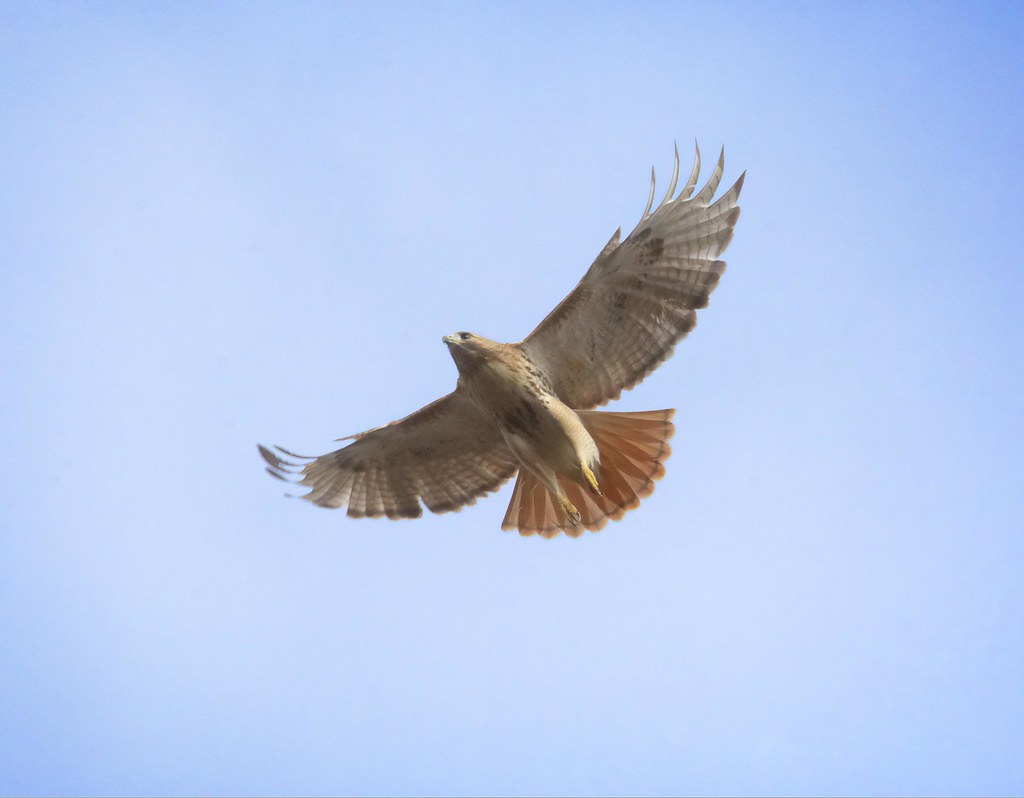 I left him to his perch on St Nicholas of Myra at Avenue A & 10th Street. 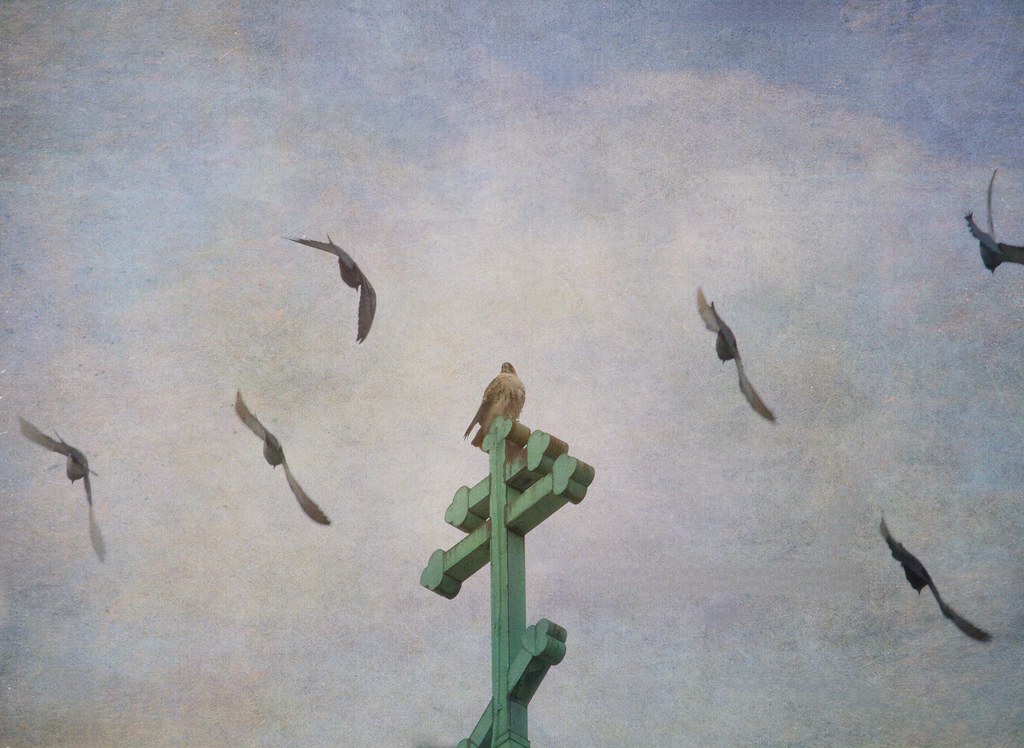 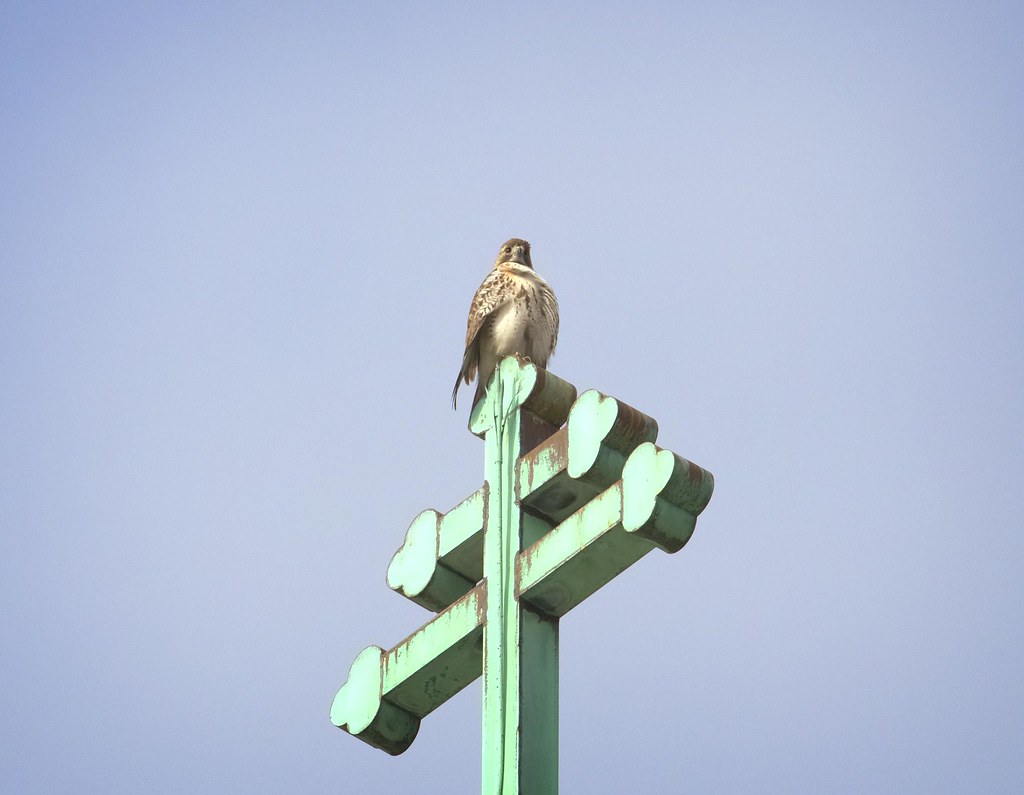 See more Christo and Dora photos on my Flickr page.


In semi-related news, the Berry College eagles (in Georgia) have laid two eggs. This is a fun camera to watch and it's now equipped with night vision, so you can immerse yourself in the lives of these birds 24/7!